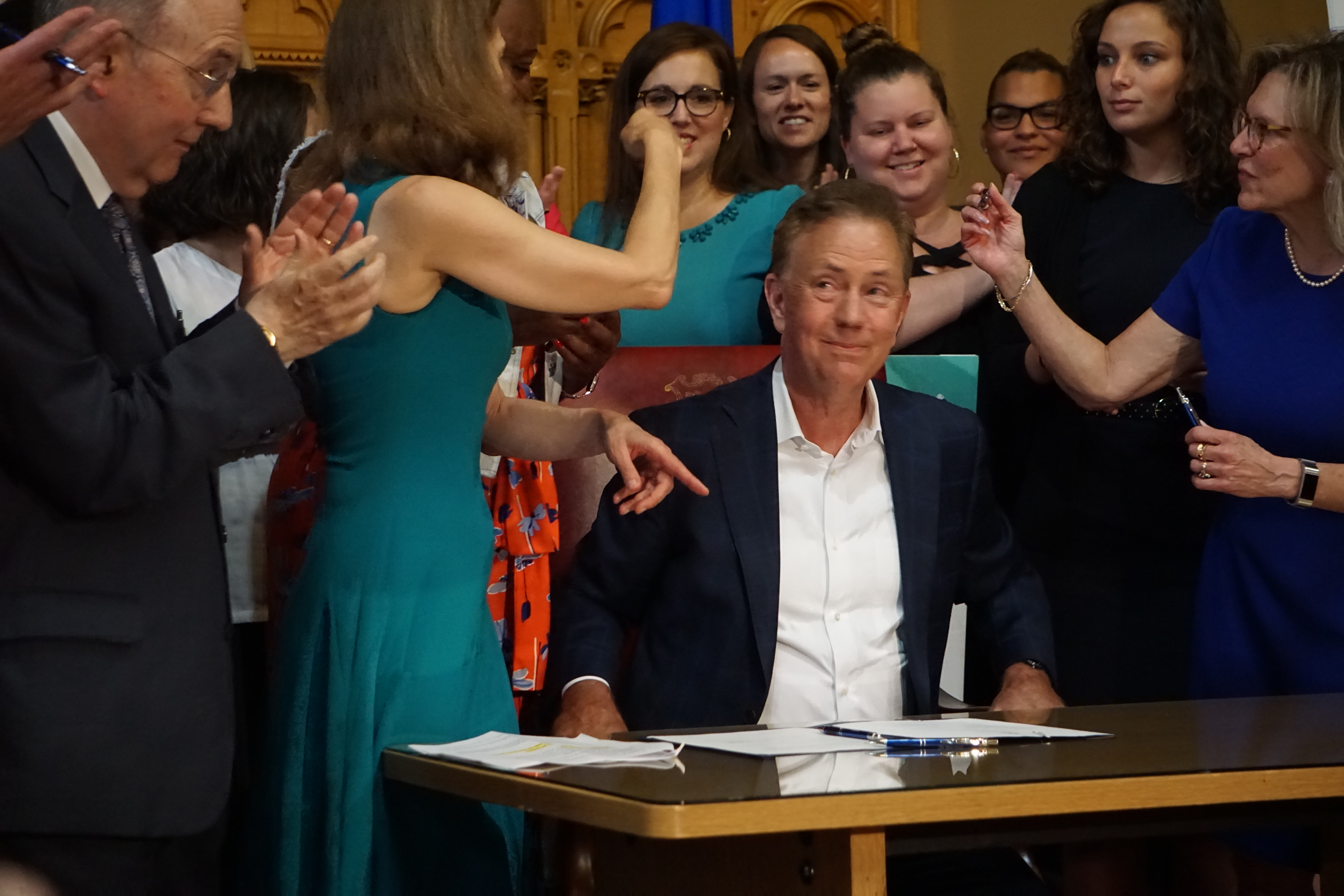 Labor progressives celebrated Tuesday with Gov. Ned Lamont over the ceremonial signing of a paid family and medical leave act that concludes a decades-long legislative debate and reflects the consequences of the election last year of Lamont and solid Democratic majorities in the General Assembly.

Opposed by the business community as a government intrusion and demanded by labor as an overdue benefit, the new law will give private-sector Connecticut workers a state-mandated, employee-funded disability insurance policy beginning Jan. 1, 2022. It builds on a 30-year old law that was the first in the nation to provide employees unpaid leave.

Lamont recalled that U.S. Sen. Chris Dodd of Connecticut first proposed a federal unpaid leave law in the 1980s, winning passage a year after the election of Bill Clinton as president in 1992. Connecticut’s General Assembly actually got there first with a state version. Both bills were inspired in part by child-development research by Yale’s Edward Zigler.

Lamont and others characterized the new law as a boon for the state’s economy, not the burden claimed by opponents.

“Other states around us have made this choice. It is a way for us to be competitive, to send a message that Connecticut cares about its workforce and that we think more broadly about the lives of people working in Connecticut,” said Senate President Pro Tem Martin Looney, D-New Haven.

Financed by a payroll tax on workers of one-half of one percent, the law will provide up to 12 weeks of replacement wages, payable on a sliding scale ranging up to a maximum of 95 percent for minimum-wage earners, and capped at $900 a week. Workers who are pregnant and unable to work could get an additional two weeks. The new tax takes effect in January 2021.

While there is no business contribution, the state’s largest trade group, the Connecticut Business and Industry Association, and others opposed it, saying it could leave small businesses with an insufficient workforce.

Unlike the state and federal unpaid leave laws, the new state law applies to any employer with even one employee.

“For those who may say this measure is anti-business, the answer to that is it is pro-worker,” Looney said. “I think this is something that we can really justify and celebrate today as a true achievement of the 2019 session.”

Rory Gale, the owner of Hartford Prints!, attended the ceremony with her five-month-old baby.

“As a small business owner I am so proud that paid family and medical leave is a reality in Connecticut. This program creates real choices for both workers and employers, which is a beautiful thing,” Gale said.

Karlene Whonder, a personal care attendant who makes $228.75 a week, addressed the audience in the Old Judiciary Room of the State Capitol, describing her struggle to work and help care for her husband and 96-year-old mother-in-law after her husband was diagnosed with cancer.

Passage of paid family and medical leave was a victory for Lamont and a source of conflict with labor. Lamont briefly threatened a veto, demanding changes at the 11th hour over whether the insurance industry could compete under the program, drawing a scathing rebuke from Lindsay Farrell, the executive director of the Working Families Connecticut party, a progressive advocacy group that lobbies at the state Capitol.

“This guy asked for our votes, the voters of Connecticut,” Farrell said at the time. “We actually assumed he wanted to run government well when he asked for our votes. Now, he is trying to pass it off to somebody else, so they can make a profit.”

Lawmakers and Lamont agreed on changes in the size, makeup and operating policies of the quasi-public authority that will oversee the program, giving the governor control over the authority and prompting him to drop a veto threat made as the Senate took up the measure.

On Tuesday, all that was forgotten. Farrell came to the signing, though she did not join the assemblage of people around Lamont.