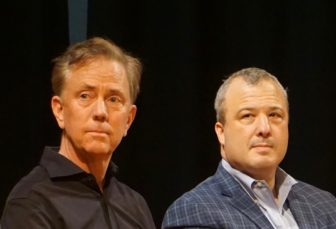 Ned Lamont, left, and Jonathan Harris at a campaign forum in April 2018.

The governor’s staff is to be briefed Wednesday morning, with a public announcement to follow.

Colleen Flanagan Johnson, who joined the administration with the intention of remaining no more than a year, is leaving as senior adviser, returning to Cigna. Maribel La Luz, the communications director, is departing the governor’s office to become senior adviser for external affairs at the Department of Economic and Community Development.

Harris, who ended his own campaign for governor to endorse Lamont, joined the administration on its first day as the undersecretary of comprehensive planning and intergovernmental policy at the Office of Policy and Management, surprising insiders who thought his experience and connections would be better used in the Capitol. 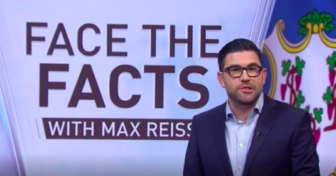 Reiss joined NBC Connecticut as its political reporter in 2014, covering the re-election campaign of Gov. Dannel P. Malloy. He will begin his new job on July 22, the day when the legislature is expected to return to adopt a bond package and consider overriding vetoes, if any occur.

“These personnel adjustments will allow us to leverage the experience and expertise of these individuals in a way that best supports my administration’s goals going forward,”  Lamont said. “Following my first legislative session, I conducted a holistic review to evaluate my office structure and needs relative to my goals. Both Jonathan and Paul’s expertise and historical knowledge of state government are natural fits in these new roles.”

Lamont was experienced as a statewide candidate, running for U.S. Senate in 2006 and governor in 2010. But unlike his predecessor, he took office without a coterie of close aides. Marc Bradley, who was his campaign manager, was the only confidant to join the administration, running the office of intergovernmental relations. Rob Blanchard, a press aide during the campaign, also joined the administration in January and will be the deputy communications director.

The governor failed to convince Senate President Pro Tem Martin Looney, D-New Haven, to call his tolls bill for a vote, but once the administration set aside tolls it won passage of a budget that met Lamont’s key parameters — no increase in the income tax or reliance on budget reserves.

Looney shows no sign of moving on tolls, insisting that Lamont bring some Republican support to the issue for him to call a vote on an issue that he sees as potentially jeopardizing the recently won Democratic majority in the Senate. After two years of an 18-18 tie, the Senate now has 22-14 advantage for Democrats.

3 thoughts on “Lamont to retool, promoting Harris and hiring Reiss”