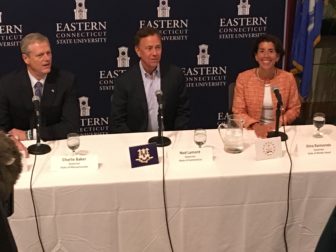 Windham – Gov. Ned Lamont was urged by his neighboring chief executives to embrace persistence Tuesday in his bid to establish tolls and rebuild Connecticut’s transportation infrastructure.

“Maybe in the first round it doesn’t go the way you want it, but you keep coming back,” Lamont said, describing the advice he received during the two-hour summit at Eastern Connecticut State University. “People evolve. They learn more about an issue. Pretty soon it passes and you turn the page.”

Lamont failed to convince the General Assembly during its regular session this spring to adopt a plan to install electronic tolling on Interstates 84, 91 and 95 and on the Merritt Parkway.

But the Connecticut governor, who insists tolls provide the only viable plan to finance a long-term rebuild of the state’s aging transportation infrastructure, now hopes to convince lawmakers to adopt a scaled-back plan in special session that only would place tolls at key highway bridges in need of repair.

Raimondo, who is still engaged in a court battle over Rhode Island’s 2016 initiative to toll trucks only, said more infrastructure work is being done in her state than ever before.

“We have the tolls, we have the revenue, we have been sued,” she said.  “But we feel very strongly about our position.” [The American Trucking Association is appealing a federal judge’s decision to dismiss its lawsuit challenging Rhode Island’s trucks-only tolling program.] 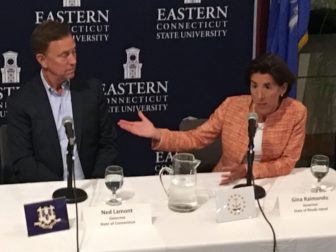 More importantly, Raimondo added, “in a couple of years from now the controversy will have gone away, but the lasting impact of better infrastructure will be there for decades.”

Baker, who like Raimondo took office in 2015, said he quickly learned the authority running public transportation in the Greater Boston area was significantly under-investing in the system.

The Massachusetts Bay Transportation Authority, or MBTA, had never spent more than $400 million per year to upgrade the subway and rail lines, bus routes and ferry services it provides.

But Baker said the authority is entering its third successive fiscal year of investing more than $1 billion.

And while no one likes paying fare increases “we have a lot of catching up to do” and public support for the investments is growing, he said.

Raimondo and Lamont are Democrats and Baker is a Republican, but all three said many of the issues they deal with — particularly those involving delivery of public services — transcend partisan politics.

“Hopefully a few people in Washington might take a page out of this book,” Raimondo said.

One area of improved collaboration that the three governors targeted involves information-sharing.

One example they cited involves better sharing of data between government agencies.

The head of the Massachusetts Registry of Motor Vehicles, Erin Deveney, resigned in late June shortly after a West Springfield, Mass., man was involved in a crash that killed seven bikers in New Hampshire.

The man, Volodymyr Zhokovskyy, had been arrested May 11 in East Windsor, Conn., after failing a sobriety test.

The Massachusetts RMV failed to act on information provided by Connecticut about that test, and Deveney said it should have revoked Zhokovskyy’s license. 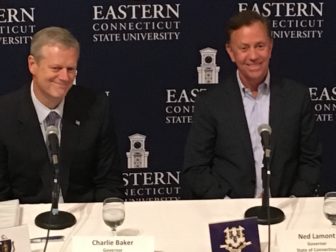 Baker said he ordered a review of all unprocessed communications with the Massachusetts agency, discovering some dating back to 2011. A forensic audit probing the matter is underway,

Another key area, according to Lamont and Raimondo, involves each state’s job development data.

For example, Raimondo said, Rhode Island recently has launched several new job training programs, but realized it cannot track new trainees who find employment across the borders. “What if they go to Massachusetts or Connecticut?” she said. “We don’t really know the full success of our programs.”

“We’re now all working together when it comes to renewable energy, “he said, adding that the summit included discussions of a joint, three-state bid to purchase power from off-shore wind power developments.

Raimondo said the three governors tentatively plan to hold a second summit in October in Providence.

“We had a productive and informal and candid discussion,” she said. “We agreed it was successful and we want to keep doing it.”