Speaker: House will vote to override Lamont veto — even without Senate support 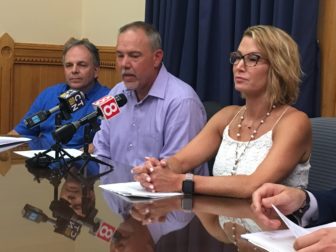 The House will vote Monday to override Gov. Ned Lamont’s veto of legislation crucial to an ongoing legal battle between restaurants and their workers — regardless of whether the Senate supports it.

And while Lamont and labor groups pressed to preserve the veto, majority Senate Democrats — whose support is essential for any override — remained noncommittal.

“I am willing to risk whatever political capital I have to do the right thing,” Aresimowicz told reporters gathered in his Capitol office. “These restaurant owners did nothing wrong.”

At issue is a bill that would force the Department of Labor to revisit its regulations and other guiding materials regarding minimum wage credits for wait staff.

But most of these workers have blended duties. For example, a server can wait on tables, which generates tips, and also refill ketchup bottles and salt shakers, which does not.

But Aresimowicz, Klarides and several representatives of the Connecticut Restaurant Association said the state Labor Department has offered different guidance — for years.

The department had stated, through website postings, printed materials and in oral advice to restaurant owners, that the owners follow the “80-20 rule” that governs the federal minimum wage. As long as a worker spends at least 80 percent of his or her time on tasks that generate tips, they can be paid the reduced wage for all work.

But over the past year about a dozen Connecticut restaurant owners — who collectively employ roughly one thousand workers — have been sued by employees arguing they are violating state law.

Barry Jessum, co-owner of the Vanilla Bean coffee shop and restaurant in Pomfret, said he wasn’t even aware there was a perceived conflict between the tip wage statute and the guidance provided for years by the Department of Labor.

“All of these companies involved in litigation, it’s kind of our fault,” Aresimowicz said.

“Those [lawsuits] are the result of the Department of Labor and what they are telling business owners,” said Klarides, who said the legislation that was adopted is “pro-worker” and designed to avoid hundreds of layoffs that could occur as restaurants risk legal fees, awards or settlement costs.

The bill Lamont vetoed would have required the Department of Labor to craft new regulations patterned after federal labor rules.

“While it may be reasonable to conclude that state and federal laws should be consistent in this area, that conclusion ought to be made only after sufficient study, debate and input from affected stakeholders,” Lamont wrote in his veto message. “That did not happen here.”

Aresimowicz said the issue was raised with House leaders late in the regular 2019 session, which adjourned June 5, and there wasn’t time for a public hearing on the measure.

The governor also objected to another provision in the bill which would have made these regulation changes retroactive to any pending labor complaints or other civil actions, something Lamont called  “patently unfair” and raising “serious due process and other constitutional concerns.”

The governor issued a statement Friday following the House leaders press conference, saying “the legislature knows this bill is unfair and likely illegal. That’s why they passed it as a strike all amendment in the waning hours of the last day of the legislative session.”

But Lamont also offered to work with lawmakers to find common ground. “I remain willing to find a compromise that makes common-sense changes on a prospective basis, but I stand by my veto of the bill that was passed,” he said.

The affected workers are not unionized, but the Connecticut AFL-CIO and the Connecticut State Building Trades Council issued a joint statement Friday opposing an override. They argued the bill “would eliminate wage-protections for Connecticut’s tipped workers.”

Any veto override would require the support of two-thirds of the House and Senate. That means 101 out of 151 votes in the former and 24 out of 36 votes in the latter.

Aresimowicz and Klarides said bipartisan support would make it possible to secure approval in their chamber.

But it remained unclear whether Democrats, who control 22 seats in the Senate, would call the bill in that chamber.

Senate President Pro Tem Martin M. Looney, D-New Haven, told the CT Mirror earlier this week that the issue remained under discussion and likely would be resolved Monday when Senate Democrats meet in a closed-door caucus.

Senate Democratic Caucus spokesman Kevin Coughlin said Friday that members had not yet reached a final decision about whether to proceed with an override.

The legislature is required by the state Constitution to meet in special session Monday to consider whether to attempt an override any of the three bills Lamont vetoed this year.

One of the other vetoed bills would have changed a statute regarding the theft of waste vegetable oil used in restaurants. The oil sometimes is stolen because it can be sold to recycling firms. Lamont argued the penalty imposed in the new bill — up to one year in prison — was too high.

The final bill he vetoed would have removed a requirement that real estate agents disclose whom they represent to potential buyers before negotiations begin.

One thought on “Speaker: House will vote to override Lamont veto — even without Senate support”