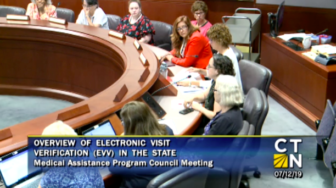 Catherine Wickline, center top in red shirt, says she is not planning to step down from the state’s Medicaid oversight panel.

The woman at the center of Attorney General William Tong’s lawsuit accusing a Watertown therapy company of Medicaid overbilling said Monday she has no plans to resign from the state’s Medicaid oversight committee.

Catherine Risigo Wickline is the target of a complaint alleging she and her company, Therapy Unlimited LLC, engaged in “pervasive and illegal schemes” to inflate claims and overbill Connecticut’s Medicaid program and the state employee health plan by millions of dollars for children’s occupational and physical therapy services. Tong’s office also accused Wickline of using unlicensed staff, including a fitness trainer and a former intern.

Wickline said Monday that despite the lawsuit, which was filed about two weeks ago at Superior Court in Hartford, she plans to keep her seat on the state’s Medical Assistance Program Oversight Council. The panel monitors Connecticut’s Medicaid and HUSKY programs and advises the Department of Social Services on eligibility standards, quality measures and health care access, among other issues.

“I’m planning on staying. I did nothing wrong,” Wickline said. “I represent independent groups on that committee and I think it’s really important to continue to represent them.”

She said she has not been asked to resign. Rep. Cathy Abercrombie and Sen. Mary Daugherty Abrams, the council’s two co-chairs, did not return calls seeking comment. Sen. Paul Formica, who appointed Wickline to the panel, also could not be reached.

Wickline said she has served on the oversight committee for about four years. The council’s office staff said it only had records of her appointment going back to 2016.

In the lawsuit, the attorney general alleged that from January 2014 to the present year, Wickline submitted claims for more time than her employees actually spent working with clients.

“Defendant Wickline required therapists to bill these excessive units for every single patient, without regard to their specific condition, the amount or type of OT/PT therapy that was provided to the patient, or the actual length of time spent with the patient,” lawyers in the attorney general’s office wrote in the complaint. 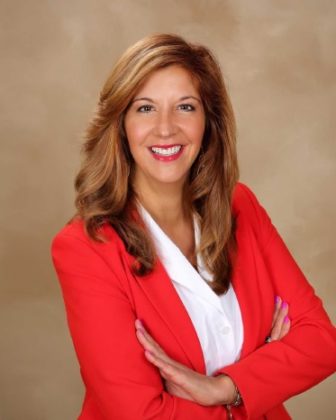 “Defendant Wickline threatened a [company] billing employee that if she did not follow Wickline’s instruction to submit claims with inflated charges, the employee and others would lose their jobs,” they wrote. “Wickline told employees that the inflated claims were how [the company] was going to make money.”

Wickline said Monday that “there are two sides to every story.”

“It’s just a matter of confusion with how I interpreted how to use a modifier, and then they went and attacked me,” she said. “It’s been over 18 months this has been going on because they didn’t find any fraud. It took them that long to find anything.”

Wickline declined to elaborate, but said part of her reason for joining MAPOC was to better understand Medicaid billing.

Wickline said she has Formica’s support.

“He’s told me as of right now that it’s no problem” to continue serving, she said. “I told him that if anything came up, if anybody felt pressure, then I would step down if I had to.”

MAPOC has canceled its August meeting. The next meeting is scheduled for Sept. 13.