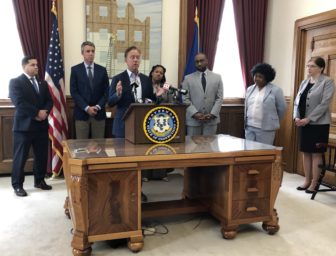 Channeling his inner businessman, Gov. Ned Lamont ordered state executive office agencies on Wednesday to begin a major restructuring of their human resources operations as a way to reduce bureaucratic bloat, save taxpayer money and improve residents’ interactions with the state.

“This is the beginning of how we lean up our state government,” Lamont said. “I’m trying to do everything I can do to convince people that we’re taking a fresh start here in state government … making sure that all the efficiencies that perhaps you see in the private sector we’re bringing to state government, and give the taxpayers confidence that their money is being well-spent, well-invested and we’re getting the job done.”

Earlier in the day Lamont signed Executive Order 2, charging Office of Policy and Management Secretary Melissa McCaw, Department of Administrative Services Commissioner Josh Geballe and Lamont’s Chief Operating Officer Paul Mounds with overseeing efforts to create a human resources centralization plan that officials said could save Connecticut $10 million every year. Geballe said there are currently 325 people providing human resources support in about 25 executive branch agencies, about a third of whom are slated to retire in the next three years.

“That’s a very large risk, obviously, in terms of the institutional knowledge and expertise that’s about to walk out the door,” Geballe said, “but we also see it as an enormous opportunity to re-look at how we provide these services, reengineer the processes and look to do them more efficiently and save some money in the process.”

Once the restructuring is complete, some human resources staff will remain at their sites and continue to provide support to their agency’s workforce. Others who perform more specialized work, meanwhile, will be assigned to work at a centralized location and organized into teams grouped by specialty, Geballe said. Such groups could include talent management and recruiting, employee leave and benefits, labor relations and business partners.

The majority of the new teams will be centralized under the state’s first chief human resources officer, Nicholas Hermes, who previously served as the director of statewide human resources.

“This new model we envision giving us enormous leverage to improve the quality of service we provide, bringing new technology that can help automate a lot of manual tasks that consume a lot of the effort of some of our staff today,” said Geballe, whom Lamont hired in part to modernize an anachronistic state government.

Technology will play a big role in state employees’ interactions with human resources after the staff are centralized.

Artificial intelligence could also be used to help human resources staff sort through resumes, automating the rote task of weeding out unqualified applicants.

Geballe said he expects to spend the remainder of the year setting up additional detailed work teams, putting a new management team in place and lining up midterm budget adjustments. He anticipates launching the new organization sometime around the end of 2019.

“This is just one example of a step in the right direction, to maximize and leverage efficiencies across state governments,” said McCaw.

The strategy is part of a broader effort by Lamont, who entered politics after a lucrative career in the private sector, to streamline and modernize government and lower costs.

“This is our our way of saying we’re beginning to run this state a lot more efficiently, in a way that emphasizes quality,” said Lamont.