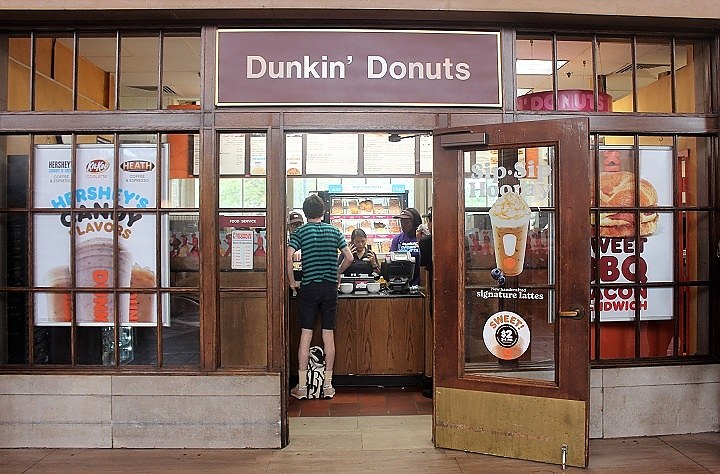 A new boutique hotel is being courted for New Haven’s Union Station as part of a planned comprehensive redo of the downtown transit hub’s commercial, office, and retail space.

A host of city and state officials along with local business owners and marketing consultants discussed those plans for a renewed commercial landscape at Union Station during a walking tour and press conference Tuesday afternoon.

Karen Pollard is one of the consultants hired by the city’s parking authority to assess the current layout of the station and recommend how existing and proposed new space might be better utilized. She said that the four upstairs floors of office space would be perfect for a “smaller, boutique, micro-hotel” project. City transit chief Doug Hausladen said several prospective hotel developers have already toured the space. 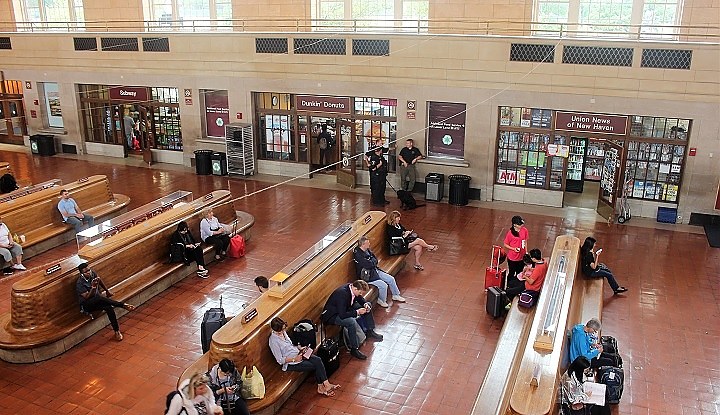 The ground floor of Union Station.

City Acting Economic Development Administrator Michael Piscitelli described a potential hotel conversion of Union Station’s upper floors as a “stretch goal” for what the state, the city, and the parking authority currently hope to achieve in the retail refitting.

That said, Piscitelli added, “we think we’ve got a plan that can unlock the pontential of this location,” not only as a passenger rail hub, but as a “welcome mat to the State of Connecticut.”

Piscitelli, Pollard, Hausladen, and Mayor Toni Harp announced during the press conference on the second floor of Union Station that two consultants, Real Estate Advisors Limited and Streetsense, are currently mapping out how to bring in more local restaurants and businesses to the station, which currently houses a Dunkin’ Donuts, a Subway sandwich shop, and a Sbarro pizza shop in its most prominent retail locations. 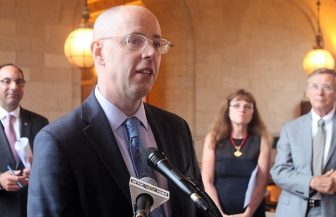 The city’s parking authority, Park New Haven, which manages the state-owned station on behalf of the city, will likely puts out requests for proposal (RFPs) in the last quarter of this calendar year to local businesses interested in setting up shop in the station. All of the current tenants are on month-to-month leases, he said, giving the city and the state maximum flexibility to refresh the current layout.

“It’s easy for me to see this facility as a retail destination,” Harp said, “a restaurant destination, and a ‘Let’s meet at the train station’ destination” with capital improvements to existing retail spaces and a slate of new tenants.

In Union Station’s roughly 100,000 square-foot footprint, Piscitelli said, “we think we can double and triple the amount of space that’s rented” with strategic improvements.

Crêpes Choupette owner Adil Chokairy said that he is interested in bringing an outpost of his popular local French food restaurant to the train station.

“When I come here to take a train,” he said, “I feel completely out of place.” The station’s retail makeup should reflect the vibrancy, diversity, and local culinary and business talent of New Haven, he said, not that of national fast-food chains.

Mother and daughter team Shivani and Shilpa Patel, who run the Sbarro pizza restaurant in the state’s underground commercial space next to the tunnels that lead to the train platforms, said they are also very interested in staying in place at Union Station. 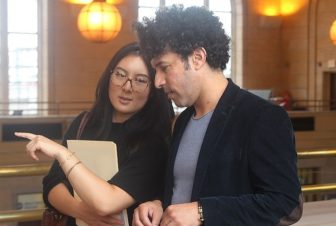 “Our plan for Union Station is really simple,” Pollard said. “We want to showcase Connecticut, specifically New Haven businesses. We’re very fortunate to have wonderful restaurants and businesses in our area.”

“This is an amazing city,” she continued. “Certainly not a third-tier city. It’s a world-class city.”

Rich Andreski, the public transit chief for the state Department of Transportation, also confirmed Tuesday that the state still plans on building a controversial new seven-level, 1,015-space parking garage atop the surface lot adjacent to the station’s current garage. garage

“We’ve gone through a couple of iterations,” he said, and that plans are currently “more than a concept.”

However, he said, “we have some challenges.” Fiscal challenges, that is, with the state’s Special Transportation Fund perpetually on the brink of multi-million-dollar deficit. The state expects that the new garage will cost $60 million to build. Andreski said the state is still waiting on the legislature to approve that funding.

Piscitelli said that, despite the city’s past vocal opposition to the new garage, Tuesday’s presser was an opportunity to showcase a state-city shared commitment to reimagining the current station’s retail.

“We’ve had many contentious moments trying to figure out Union Station,” he said, “the parking garage, the street. Lots of challenges. I think today’s discussion is an indication of areas of common ground where we really can create a true civic vision that is way beyond us.”

Pointing to another vacant lot right across the street from Union Station, Mayor Harp said that new housing will also soon be built atop the old Church Street South site, which is owned by Massachusetts developer Northland Investment Corp.

“Many of you likely noticed the now vacant property just across the street where the Church Street South housing complex once stood,” she said. “Within the very near future, that site will lit bring hundreds and hundreds of more housing units with residents seeking easy access to this transportation hub.”

This story was first published Aug. 13, 2019, in the New Haven Independent.