Council begins study of discrimination against people with criminal records

Connecticut residents with criminal records face 559 barriers — all codified in state statute — that can limit their ability to lead successful lives after they’ve been released from prison, and more than two-thirds of those barriers are related to employment.

The task before the Council on the Collateral Consequences of a Criminal Record, which met for the first time Thursday in Hartford, is to study those barriers and make recommendations before next year’s legislative session about how to lessen and eliminate the inequities. 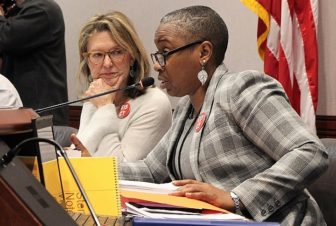 The pernicious effects of a criminal record can live on long after people complete their time, said Rep. Robyn Porter, D-Haven, who co-chairs the 20-member council with Sen. Julie Kushner, D-Danbury.

“Let’s just be clear: 95% of the people that are currently incarcerated are coming home, back to our communities and hopefully back to the workforce,” said Porter. “We need to make sure that when they do, these barriers that are in place are actually obsolete, and that they have an opportunity to start on a level playing field.”

The council was created during the last legislative session after lawmakers watered down a bill originally intended to prohibit discrimination in employment, housing, public education, insurance and government programs services based on a person’s criminal history. Lawmakers amended the proposal before sending it to Gov. Lamont’s desk, opting instead to create a council to study the issue.

Emphasizing the intersectionality of criminal justice issues, council members come from a slew of state agencies, interest groups and advocacy organizations. Among the groups represented are the Department of Correction, the Board of Pardons and Parole, the ACLU of Connecticut, the Connecticut Coalition to End Homelessness, the New Haven Legal Assistance Association Reentry Clinic and the Connecticut Coalition for Achievement Now.

Porter stressed that the council’s work will give justice-impacted people “another” — not necessarily a second — opportunity to put their lives back together after a criminal conviction because, she said, “sometimes they haven’t been given a first chance.”

The recommendations the council eventually makes should appeal to lawmakers on both sides of the political divide, Porter added, because almost no one has been untouched by the criminal justice system.

“I don’t believe that there’s any district in the state of Connecticut that is not impacted on some level with people reentering society and having difficulties finding what are two major obstacles, housing and employment.”

Citing national statistics, Richard Cho, CEO of the Connecticut Coalition to End Homelessness, said 1 in 4 Connecticut residents have a criminal record. The council must look beyond the obstacles faced by people who have recently been released from prison, Cho said, and also consider the challenges shouldered by those who have been in their communities for years.

The task force is made up of three subcommittees. Cho is the chair of housing; the other subcommittees are research and logistics, chaired by Andrew Clark, with the Institute for Municipal and Regional Policy, and employment, chaired by Marc Pelka, with the Office of Policy and Management.

Council members expressed concern that no one from the business community serves on the employment subcommittee. 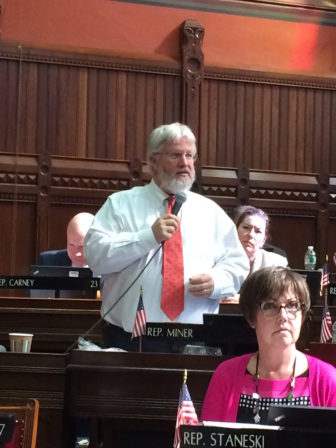 “Sooner rather than later, there won’t even be a seat at the table for them, other than for them to [ speak during] public participation,” said Sen. Craig Miner, R-Litchfield, referring to “key people” missing from the council and its subcommittees. “And then they’re gonna invest their time at the back end, to scuttle it. I’ve been here 20 years. I’ve watched this happen.”

Miner said many of the issues council members are grappling with ultimately have to do with risk.

“It’s a risk when people hire people. It’s a risk when people rent someone an apartment, whether they risk renting me an apartment or hiring me or not, or someone else. And unfortunately, we use statistics and history to try and bear out what that risk might be,” he said. “To pass legislation obligating someone to do something, when the risk is too great, is only gonna cause another problem.”

“I don’t see damnation or doom. I just see hindrances and obstacles,” said Tiheba Bane, the founder of Women against Mass Incarceration. “But with the push and the understanding  and the collaboration of everyone working together, we can get through whatever barriers and obstacles that come forth, because that’s what we’re here to do.”

The council will hold at least three public forums in communities across the state before presenting its findings to the legislature’s Labor and Public Employees Committee next year. Its next meeting will be Sept. 19 at 9:30 a.m.