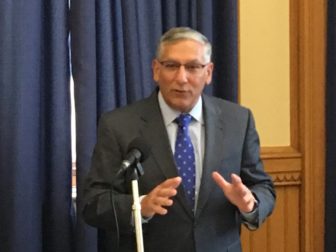 All 14 members of the state Senate Republican minority called Thursday for a special session to save nine nursing homes from the loss of $5.3 million in funding due to a new reimbursement formula that penalize facilities with high vacancy rates.

The nine homes all fall below a new 70 percent occupancy standard set by the state for Medicaid reimbursements, and legislators say they fear the loss of revenue could lead to closures.

“We can and we must restore this funding. We would like to work together to do so,” the Republicans said in a letter directed to Democratic legislative leaders. “People need to come before partisanship and politics.”

The Medicaid policy, coupled with another funding cut for at-home care for seniors, could leave some of Connecticut’s most vulnerable seniors at risk, caucus members insisted.

“This policy disregards the serious and traumatic consequences closures would have on vulnerable nursing home residents including persons with dementia,” GOP senators wrote. “Such closures could potentially push people into a community that does not have the proper supports.”

Gov. Ned Lamont expressed amusement at the GOP complaining of a budget cut.

“We’re sort of upside down in this state, where you’ve got Republicans complaining the Democrats are trying to hold the line on spending,” he said.

Lamont and the General Assembly averted a multi-billion-dollar potential shortfall without increasing state income tax rates when they adopted a budget for this fiscal year and the next in June. The new budget generally caps nursing home rates at last fiscal year’s level.

Facing threatened strikes by unionized workers at 25 homes, the state Department of Social Services was authorized to increase rates to enhance employee wages and benefits. But the budget also allows DSS to reduce rates significantly for homes with vacancies of 30 percent or more, poor quality ratings, or both.

The nursing homes that stand to lose funds based on the vacancy standard  are located in Bristol, Fairfield, Hamden, Shelton, Simsbury, South Windsor, Torrington, Wallingford, Waterbury and Wolcott. 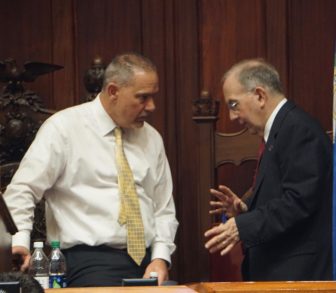 But they also said GOP criticism of the budget crafted by the Democratic majority is unfair, given that Republicans didn’t even propose a budget this past session.

“Offering an alternative budget would have provided them with an opportunity to forthrightly state their spending priorities in comparison with the adopted budget,” Looney said. “Instead they chose to publicly commit to no alternative appropriations while waiting in the weeds to selectively snipe at elements of the budget until the next election. We do remain open to good faith discussions on this and other issues.”

“I appreciate the willingness of Senator Fasano and his caucus members to come to the table to help assist with this issue, considering they never put forward a balanced budget during the legislative session,” Aresimowicz said. “We have been monitoring this situation closely and my office has been in touch with both the administration and representatives of the nursing homes. We hope this can be resolved in a way that achieves the overall policy goals without impacting seniors or their care providers.”

Top legislators and Lamont also have discussed coming back into special session to resolve several other matters, including: ratification of a tentative legal settlement with Connecticut’s hospital industry; adoption of a new state bond package for this fiscal year and next; revisions to state law and regulations governing minimum pay for restaurant workers who perform both tipped and non-tipped work; and a long-term plan to finance transportation infrastructure upgrades.

Max Reiss, Lamont’s communications director, said the administration will review appeals filed by the affected nursing homes, noting they can claim a hardship and argue for a special rate adjustment.

“We will review any such requests we receive, and will evaluate local impact of the rate reductions, take into consideration the direct and indirect repercussions of such changes, and consider viable options to the adjustment of their operational model,” Reiss said.

But Reiss added, “We currently have excess capacity of over 3,000 nursing home beds and data indicates that number will double over the next two decades. The data and trends are clear that we need to continue our rebalancing efforts for long term care services, and the Lamont administration believes that this rate structure provides for that balance, while also providing high quality options for existing residents.”

Governors and legislatures trying to contain nursing home costs have expanded state funding over the past two decades to expand in-home care for seniors.

But that generally postpones the need for many elderly residents to enter nursing homes, driving down occupancy rates even as the population ages. And the industry also has countered that vacancy rates can shift periodically and that empty beds don’t always mean space won’t be needed in the near future.

Matthew Barrett, the president of the Connecticut Association of Health Care Facilities, said the industry could safely eliminate about 500 beds without closing facilities if the reimbursements are restored.