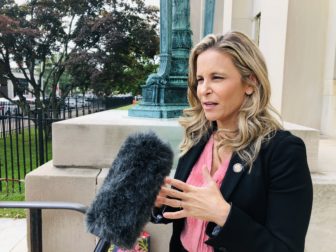 Cara Pavalock-D’Amato, a lawyer for the Bristol couple suing to block the release of school-level immunization data, said the information could be used as a ‘scare tactic’ to persuade people to vaccinate.

A lawyer for a Bristol couple that has sued to block the release of school-level immunization data told a judge Monday that, if publicized, the information would be used as “a scare tactic to try to bully people into vaccinating.”

Cara Pavalock-D’Amato, a Republican lawmaker who is representing Kristen and Brian Festa, also asked Judge Susan Quinn Cobb not to toss out the lawsuit brought by her clients. Attorneys for the state have filed a motion to dismiss the case. A hearing on the motion went forward Monday in Hartford Superior Court.

“I had read somewhere that the commissioner stated – and maybe it was the legislators, too – they had concerns about immunization rates going down, and that the purpose of this was to encourage more people to get vaccinated,” Pavalock-D’Amato said of the data release. “Publishing that information is a scare tactic.”

The Festas are seeking the erasure of 2017-18 school immunization rates published on the health department’s website, along with an injunction to prevent the distribution of 2018-19 data. Health Commissioner Renee Coleman-Mitchell’s decision in May to make public for the first time a school-by-school assessment of child vaccination rates came amid a national measles outbreak and the recording of three cases in Connecticut.

But the Festas have charged that Coleman-Mitchell didn’t have the authority to release those figures, and they claim that while no children’s names were included in the data, the information amounts to a breach of privacy. Some schools have only a small number of students, they said, and unvaccinated children may be easy to identify.

After the data was posted, families with unvaccinated kids became the focus of threatening remarks on social media, the Festas said. The couple has a 7-year-old son who attends Meliora Academy – one of the schools mentioned in news reports as having a high rate of unvaccinated students.

The 2017-18 figures show 102 schools where fewer than 95 percent of kindergarten students were vaccinated against measles, mumps and rubella – the threshold recommended by the Centers for Disease Control and Prevention. The revelation alarmed lawmakers, who are considering repealing the state’s religious exemption from vaccines.

Health Commissioner Renee Coleman-Mitchell is now preparing to release data from the 2018-19 school year. She initially said she would not disclose the latest figures, but was overruled last month by Gov. Ned Lamont.

“The governor and the commissioner feel strongly that transparency is important and people have a right to know information such as this vaccination data on a school level,” Av Harris, a spokesman for the health department, said Monday. “This kind of a release has been done for years by some of the neighboring states, and we’re going to do it again.”

Despite the lawsuit, Harris said the latest round of data is expected to be posted on the health department’s website Oct. 21.

On Monday, Pavalock-D’Amato made a case for why the lawsuit should proceed. She said her clients had exhausted other remedies to stop the data release by sending a letter Coleman-Mitchell, and went to the commissioner’s office to speak with her in person.

The letter, dated May 3, is signed by LeeAnn Ducat, the founder of Informed Choice CT, a group that has vehemently opposed plans to roll back Connecticut’s religious exemption. It asks Coleman-Mitchell to refrain from publishing the 2017-18 school-level percentages. Although Ducat signed the letter, Pavalock-D’Amato said Brian Festa drafted it and that he was a board member of Informed Choice at the time.

Brian Festa also went with Ducat to visit Coleman-Mitchell at her office. The commissioner published the data anyway, and wrote back to Ducat saying state law and departmental regulations give her broad powers to do so.

Darren Cunningham, a lawyer for the state, pointed out that the Festas’ names did not appear on the letter and said those efforts did not demonstrate that the couple had exhausted all remedies.

Cunningham noted that the school-by-school data was categorical and included “no naming of students whatsoever.”

Cobb has not yet ruled on the motion. State officials said she is expected to weigh in before the Oct. 21 data release.