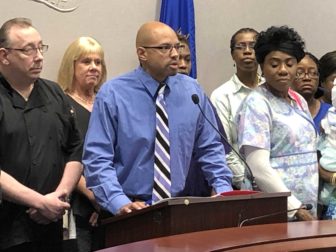 A new policy designed to eliminate unused beds in nursing homes has put Gov. Ned Lamont at odds with a key part of his base, Connecticut’s largest healthcare workers’ union.

SEIU Healthcare 1199NE announced Monday a new online ad campaign to press the Democratic governor to reverse the policy, which it says has put nine nursing homes — with large vacancy rates — at risk of closing.

Meanwhile, a spokesman for Lamont said the administration is enforcing a policy crafted in cooperation with lawmakers to preserve nursing home quality while controlling costs in a key segment of the state budget.

“Do some brainstorming, do some heavy thinking, think with your heart,” Hashia Vazquez of Hamden, a retiree whose 89-year-old aunt is a patient at the Arden House home in Hamden, urged Lamont in one ad. “They deserve to have quality of life, dignity and respect.”

All of these groups have “expressed deep concern,” over a policy that could drive nine homes to closure, potentially displacing an estimated 1,000 residents and 2,000 workers, said 1199 President Rob Baril.

Just four months ago, Lamont came out strong for the union, pushing for and securing additional funding to improve wages and benefits for all nursing home workers.

Union spokesman Pedro Zayas said 1199 appreciates that support very much. But he quickly added that “We went to bat for the governor in the last election, including in some of the areas where nursing homes could be closed.”

And while the union, which has about 19,000 members in Connecticut, remains hopeful it can craft a solution with Lamont and legislators, Baril said, the current policy “is putting numbers before people” and “balancing spreadsheets before balancing lives.”

“The governor and SEIU have had a very good relationship,” the governor’s communications director, Max Reiss, said Monday. “At times there might be some policy disagreement, but I think that’s why we all want to come together and seek solutions.”

Reiss added that “Connecticut’s nursing homes play a vital role in providing a high quality of care to those that are in need. However, Connecticut pays one of the highest costs per bed, due in large part to the high percentage of vacant beds in our nursing homes.  Allowing seniors to stay in the comfort of their own homes in order to receive care results in better health outcomes for patients and is in line with the growing trend of in-home healthcare. This not only makes sense, it is more cost efficient for the state, taxpayers and patients.”

At issue is a budget provision authorizing the Department of Social Services to reduce rates to nursing homes with bed vacancy rates exceeding 30 percent. The nursing homes that stand to lose an estimated $5.3 million in total over this year and next, based on the vacancy standard, are located in Bristol, Fairfield, Hamden, Shelton, Simsbury, South Windsor, Torrington, Wallingford, Waterbury and Wolcott.

Administration officials have said this was just one of many tough choices the new governor and the legislature’s Democratic majority made to avert a multi-billion-dollar projected deficit in the new state budget — without increasing income tax rates.

But leaders of the legislature’s Appropriations Committee say they and other lawmakers had a different understanding of the new rate-cutting policy.

Sen. Cathy Osten, D-Sprague, co-chair of Appropriations, said her understanding was that rate reductions would not be imposed early in the fiscal year — and not before DSS analyzed the impacts of potential facility closures.

Legislators and union officials say some homes have allowed some beds to remain vacant so they could focus resources on providing vital specialized services such as dialysis, hospice, and various chronic care programs.

“What will the real human cost be to residents, their families and the workers who care for them every day?” Baril asked during the press conference, adding he fears key programs could be lost as financially stressed homes close.

Lamont did offer a brief reprieve last week. The administration announced it had temporarily suspended plans to reduce one-and-a-half months’ worth of funding on Sept. 20 to the nine homes with high numbers of vacant beds.

Reiss noted Monday that these facilities also have appealed the rate cuts recommended by DSS and can request special “hardship” rate hikes — though there is no guarantee they will be granted.

“If there are other recommendations on how to balance the budget, the governor would like to hear them,” Reiss said.

It is not an easy task. The current fiscal year’s budget is within $200,000 of the statutory spending cap.

About a dozen legislators attended Monday’s union press conference. And when asked whether they would support legally exceeding the cap, or whether they would cut other programs to free up resources for nursing homes, only Sen. Saud Anwar, D-South Windsor, responded to those options.

Rep. John Hampton, D-Simsbury, and Sen. George Logan, R-Ansonia said they would not exceed the cap but believed other budget cuts could be found.

But Logan suggested none and Hampton offered repeal of the new state Family and Medical Leave program — which was backed overwhelmingly by his fellow Democrats and has little chance of being repealed.