Lamont: Prepared food tax hike will be narrowed in scope 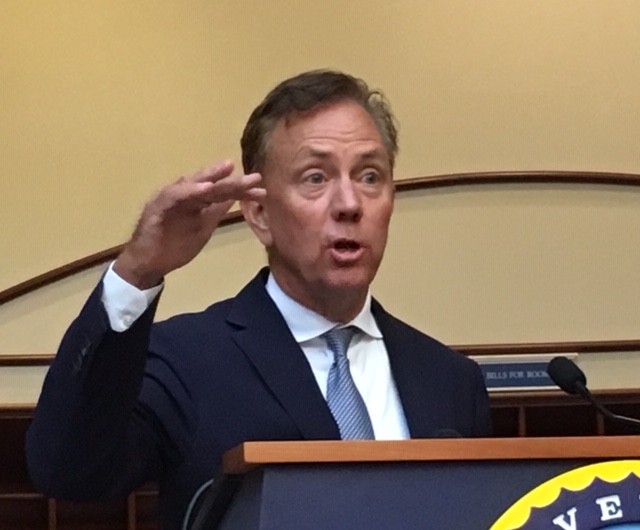 Gov . Ned Lamont announced Tuesday he expects the new sales tax surcharge on prepared foods will be scaled back — and applied to a narrower range of items — before it takes effect on Oct. 1.

The Democratic governor, who made the announcement following the State Bond Commission meeting, echoed concerns raised over the past week by legislators from both parties.

But the governor’s budget director, Office of Policy and Management Secretary Melissa McCaw, said legislators also could have helped back in June when they enacted the tax hike by drafting more specific language.

“I think that DRS too broadly interpreted what was the intent of the legislature,” Lamont said, referring to a Department of Revenue Services policy statement crafted in late August to help retailers prepare for the tax hike.

The governor said his budget office already has begun working with revenue services officials to scale back the range of items that would be subject to the surcharge. “We know what was intended,” he said.

Lamont said DRS did not run its list of taxable food items by his office before publishing it.

House and Senate Republicans first raised the issue last week when they disclosed the DRS policy statement offering retailers guidance on how to apply the surcharge.

The tax hike was described — when legislators adopted a new state budget in early June — as a 1% surcharge on restaurant food or on “prepared meals.” That means someone who purchased a grinder and small soda combination, even at a supermarket, would pay 7.35% sales tax, rather than the base rate of 6.35%.

But when DRS released the policy statement this month, it covered a much wider range of prepared foods.

The extra penny will come on each dollar spent on a wide array of foods, many of which might not be thought of as a “meal,” critics said.

These items include: popsicles and other frozen treats, doughnuts and bagels, pizza slices, hot dogs, smoothies, power bars, a hot bag of popcorn, and even pre-packaged bags of lettuce and spinach.

The surcharge also applies to beer, fruit juices, milkshakes, hot chocolate, wine, and distilled alcohol like brandy or rum. It even applies to coffee and tea if purchased prepared to drink, rather than as coffee grounds or in tea bags.

Initially, both Lamont and Democratic leaders in the House and Senate responded simply by saying Republicans were hardly in a position to criticize.

Democrats had made many difficult choices, they said, while successfully closing a projected $3 billion-plus deficit in the new state budget without increasing income tax rates.

Republicans, on the other hand, opted not to show their cards last spring, offering no plan to close the shortfall — after a decade of offering alternative budgets.

But things intensified last Friday when the legislature’s nonpartisan Office of Fiscal Analysis revised its estimate on how much revenue the surcharge would generate.

Based upon the policy statement, OFA projected the tax would generate $158 million over this fiscal year and next — nearly 40% more than lawmakers anticipated. By 2020-21, consumers would pay more than $90 million per year.

“The unilateral decision by the agency to expand the sales tax to additional food items is not consistent with the intent of the budget,”  House Democrats wrote in their statement. 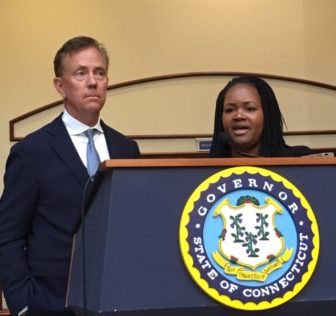 Lamont did not say Tuesday which items would be identified as taxable and which as non-taxable. But he noted that, under current law, prepared foods — unlike groceries — are subject to the regular 6.35% sales tax, even if sold at a supermarket. And the goal of the legislation was to apply a surcharge to all of these items already subject to the sales tax.

The governor added that he expects a revised policy statement to be made available to retailers “as soon as possible.” And McCaw said she doesn’t believe it will take her office and tax officials long to develop one.

“At the end of the day we know what we meant with our partners in the legislature” when a new state budget was adopted in June, McCaw said.

But Republican legislators remained skeptical that this was all a simple misunderstanding.

“If Democrats no longer want to tax groceries, they need to acknowledge what their budget did and make the changes to fix it in a special session,” said Senate Minority Leader Len Fasano, R-North Haven, who urged repeal of the sales tax surcharge. “I appreciate that Secretary McCaw admitted the legislation could have been written with greater specificity. That is exactly why the legislature needs to return to specify what should and should not be taxed. Anything short of that is foolish and ridiculous.”

Rep. Chris Davis of Ellington, ranking House Republican on the legislature’s tax-writing Finance, Revenue and Bonding Committee, noted the language creating the surcharge did mention it would be applied to prepared foods in “grocery stores.” If Democratic lawmakers only meant certain prepared foods, he said, they should have been more specific when they wrote the law.

Neither Fasano nor Davis proposed specific spending cuts or alternative revenue increases to offset the funds state government would lose if the sales tax surcharge is repealed.