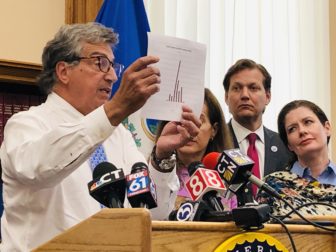 Theodore Andreadis, head of The Connecticut Agricultural Experiment Station’s mosquito management program, holds up a chart showing the number of EEE isolates per week from mosquitos.

State officials are urging residents to be cautious after a second Connecticut person died of Eastern Equine Encephalitis, a rare but serious illness caused by mosquito bites.

The second patient, who lived in Old Lyme, was described as elderly. Officials did not release the resident’s name or age.

The first patient, a 77-year-old East Lyme woman who has been identified in media reports as Patricia Shaw, died earlier this month after spending weeks in the hospital.

“This is a serious public health concern and we wanted to let you know that these are the first deaths from EEE that have been reported here in our state since 2013,” Lt. Gov. Susan Bysiewicz said Tuesday. “We also know that this is an effect of climate change.”

This is the third fatality from the disease in state history. One person died in 2013.

The timing this year is unusual. The second death was recorded as Connecticut’s mosquito population dipped dramatically from the summer months.

Officials said the disease has been most prevalent in Southeastern Connecticut, but mosquitos in South Windsor recently tested positive for EEE, deepening concerns.

“What we’re experiencing this year really is remarkable,” said Theodore Andreadis, director of the Connecticut Agricultural Experiment Station’s mosquito monitoring program. “We have never seen this much activity at this high of a level over such a wide geographic region. And so it is quite unusual.”

State leaders aren’t sure why the Northeast is seeing an uptick in the number of EEE cases this year. Two people in Massachusetts and one person in Rhode Island also have died recently from the illness.

The disease circulates year round in Florida. It was brought to the Northeast by migrating birds that were bitten by mosquitos carrying the virus, Andreadis said.

“We had many infected birds that came into the Northeast region and then the mosquito numbers were quite high,” he said. “One particular mosquito called Culiseta melanura that develops in these freshwater, hard wood swamps started feeding on the birds. And for whatever reason it started amplifying to very, very high levels.”

State officials are advising people to stay inside during the early evening and at dusk, to wear protective clothing and to use insect repellant. The Connecticut Department of Transportation will post warnings about the disease on electronic highway signs around the state.

About one-third of the people who contract EEE die, experts say, and about half of those who survive have significant brain damage.

Schools and sports groups in Southeastern Connecticut are limiting outdoor activities in the late afternoon and evening to minimize risks. State leaders urged organizations in and around South Windsor to do the same.

Environmental workers sprayed pesticides in several Eastern Connecticut towns over the summer, and the state Department of Energy and Environmental Protection did ground spraying in areas with a high concentration of mosquitos, including at Pachaug State Forest in Voluntown.

With the arrival of fall and cooler temperatures, the number of mosquitos is “declining very rapidly,” Andreadis said, which should soon allay concerns over the disease.

“We really just need to get through the next couple of weeks and we’ll be OK,” he said.