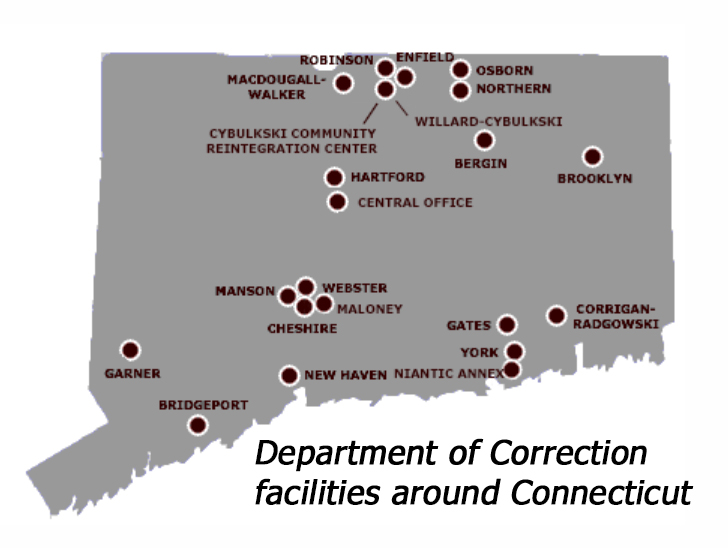 Judges from the U.S. Second Circuit Court of Appeals have allowed  a lawsuit to proceed challenging the way Connecticut assigns prison inmates to legislative districts.

Employing a process the plaintiffs call “prison gerrymandering,” Connecticut counts inmates as residing in the districts in which their penitentiaries are located, rather than the districts they call home. The plaintiffs — which includes the families o inmates and the National Association for the Advancement of Colored People — argue this is a violation of the 14th Amendment’s “one person, one vote” principle.

“The plaintiffs are looking to end the practice of prison gerrymandering in Connecticut,” said Nicole Billington, a law student intern at Yale Law School’s Peter Gruber Rule of Law clinic. It is representing the plaintiffs as co-counsel with the NAACP.

Because the state’s incarcerated population is disproportionately represented by African Americans and Latinos, the plaintiffs argue the redistricting plan benefits the rural, predominantly white communities where the penitentiaries are located, rather than the cities where many of the inmates reside. The suit contends that inmates don’t get the same benefits from their prison’s legislative district as a constituent who isn’t incarcerated. Inmates usually don’t have contact with the elected officials who represent the district in which their prison is located, can’t go to public or private spaces in their districts since they’re incarcerated, can’t drive on their district’s roads, or send their children to their district’s schools.

By considering these inmates a part of their prison or jail’s legislative district, the plaintiffs argue, the redistricting plan  inflates the power of rural, white districts and takes power away from the poorer urban districts many Connecticut inmates call home. Such a policy, Billington said, “diminishes the voting power of people in urban districts.”

The state appealed to the Second Circuit after a district court judge refused to dismiss the suit last February. The three Second Circuit judges upheld the lower court’s ruling, writing that the claim is “neither frivolous nor insubstantial.”

The judges remanded the case back to the district court.

The ruling is the first time a federal appeals court has allowed a prison gerrymandering case to move forward and be heard on its merits, said Billington.“When suits in other circuits have come up, they have been dismissed, basically, before this point.”

A spokeswoman for the State Attorney General’s Office said they are “reviewing and evaluating the decision.”

A spokesman for Secretary of State Denise Merrill’s office declined to comment on ongoing litigation. In June 2018, when the suit was filed against her and Gov. Ned Lamont, Merrill said her office plays no role in the redistricting process and is named in the suit because “I am Connecticut’s chief election officer and enforce the laws and district lines enacted by the legislature.

“As Secretary of the State, I have consistently supported legislation that would have ended this practice in Connecticut, and I continue to believe that people who are in prison should be counted where they resided prior to their incarceration, and not in the prison in which they are incarcerated,” Merrill said. “Prison gerrymandering unfairly inflates the size of some districts at the expense of others, and ending the practice will give a more accurate population count of our urban communities.”