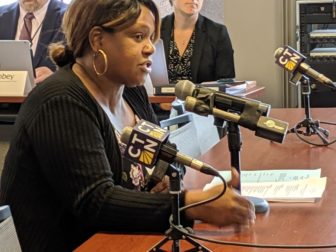 Gwen Samuel, president of the Connecticut Parents Union, asks the State Board of Education to review provisions exempting the Partnership for Connecticut from state disclosure and ethics rules.

The leader of the Connecticut Parents Union made an impassioned plea Wednesday for members of the state Board of Education to review the provision that exempts the new partnership between the state and Dalio Philanthropies from disclosure and ethics rules.

“My main concern, and I’m sure I speak for many parents, is the fact that this could all be done in secret,” Gwen Samuel, president and founder of the Connecticut Parents Union, told the board. “There should never be any entity, including state entities, that have access to [public school] children of this state without transparency.”

In April, hedge fund giant Ray Dalio and his wife, Barbara, joined Gov. Ned Lamont to announce that Dalio Philanthropies would donate $100 million over five years to help students in struggling schools. That donation was to be matched by $100 million in state funds over the five-year-period, with the hopes that another $100 million could be raised from other donors. The money would be overseen by a public-private partnership, called the Partnership for Connecticut.

But Dalio Philanthropies also asked that the partnership be exempt from state disclosure rules, a request that was granted in June by Gov. Ned Lamont and the Democrat-controlled legislature. Since then, legislative leaders who sit on the partnership board have balked at some of the other proposed conditions, such as one that would create a five-member executive committee to oversee most of the partnership’s work while excluding all of the elected officials who are subject to the state’s Freedom of Information Act.

Lawmakers also objected to a request that they unanimously approve — via email — a tentative budget, nearly $250,000 in executive compensation, and various operating procedures before the partnership’s first meeting.

Samuel, and others, have argued that the partnership should be subject to state disclosure laws because $100 million in taxpayer money is being spent in public schools.

Wednesday, Samuel repeated this message before the state board of education.

“We have the right to know what is happening to our children in the public school system and I’m trying to understand why this board has not weighed in to ensure the protection of Connecticut children,” she said.

While the Dalio donation “sounds like a great thing,” Samuel said, “gifts with a string are no longer a gift.”

She requested that the board hold a special meeting “to go over this [provision] and if anything gives you pause, based on your legal obligation to the children, then I’m asking you to do the right thing, put it in writing, send it to legislators.”

Board members, who do not respond to speakers during the public comments portion of their meetings, did not seem to share Samuel’s concerns. 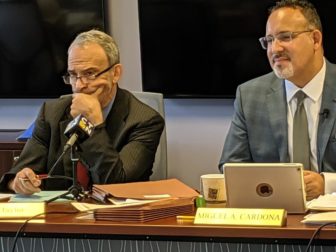 Taylor noted that one member of the state board of education, Erik Clemons, also serves on the board of the public-private partnership overseeing the collaboration.

“I trust that as that gets moving our board member, who is very actively engaged in that, will provide information to the [state Board of Education,]” Taylor said. “We will certainly want to know what they are doing and to know in a public way.

“The legislature gets to designate who they want to be responsible for the money they appropriate,” Taylor added. “In this case, they set up a different system … I assume they’ll be very proud of what they do and they’ll want everybody to know about it.”

Estela Lopez, vice-chairwoman of the Board of Education, said she wants to give the partnership “the benefit of the doubt” moving forward.  She said she expects the state board to connect with the partnership board through Clemons.

Board member Don Harris, however, said he is very concerned about the transparency of the partnership.

“It’s a lot of money and I’m concerned about the kids, especially those in need,” Harris said. “Are they going to get some of the money? I just have no idea. I know there’s a board, but what’s the board doing?”