Build now, pay later? It’s not going to be that easy.

The governor has not moved off his insistence that Connecticut install tolls – but he has revamped his plan.

As Gov. Ned Lamont fishes for legislative support for his new transportation plan, he’s dangling some juicy bait: hundreds of millions in low-interest federal loans that can rebuild infrastructure and jump-start Connecticut’s economy now — but don’t come due for 10 or 15 years.

If that sounds a little too good to be true, however, you wouldn’t be wrong.

That’s because while the governor reels in lawmakers with visions of new bridges and wider highways, his plan also comes with a hook: Connecticut can’t leave the entire bill for its children to pay off.

Some new source of revenue must be established now and the dollars set aside, especially in a state that already has dumped more than $30 billion in pension debt on future taxpayers.

For Lamont, that new source of revenue is a network of tolls – albeit a much smaller one than he proposed in February.

And while his administration briefs lawmakers on the transportation plan in hopes of securing a special session later this fall, legislators have come within nibbling distance — but haven’t yet bit.

“What’s very important to the governor is to do two things at once,” Ryan Drajewicz, Lamont’s chief of staff, said Friday. “We want to be fiscally responsible, but also to recognize the reality that we have within the legislature.”

“What’s very important to the governor is to do two things at once. We want to be fiscally responsible, but also to recognize the reality that we have within the legislature.”

That “reality” is a Democratic majority in the House that proclaims it’s ready to adopt tolls now, and a Democrat-controlled Senate that might be able to pass tolls by the narrowest of margins — but doesn’t want to do so without Republican support.

The GOP remains wary of any tolling network, even one much smaller than the system Lamont proposed in February . But Republican leaders also concede there’s appeal in the governor’s plan to leverage huge sums of federal money — cheaply — right now.

“These are game-changers,” said Senate Minority Leader Len Fasano, R-North Haven. “They certainly can change the landscape of what we’re looking at. There’s something very alluring about that.”

Though the governor hasn’t released many details of his plan, sources familiar with it say it involves a 10-year investment of about $18 billion, or an average of $1.8 billion per year.

Connecticut currently spends about $1.5 billion annually on its infrastructure, a roughly equal mix of state borrowing and matching federal grants.

Lamont wants to supplement that foundation with low-interest federal financing available for highway, bridge and rail work. Interest rates are close to 2%.

Equally important, the state could defer making any payments — or accruing any interest — on the debt until five years after completion of a major project. And given that larger projects could take 5 to 10 years to finish, Connecticut might not have to start paying off this debt for 10 to 15 years.

That means if  the state starts paying off this obligation around 2030 or 2035, and follows the typical 15- or 20-year schedule, the full debt might not be paid off until 2045 or later.

“These are game-changers, They certainly can change the landscape of what we’re looking at. There’s something very alluring about that.”

Federal transportation officials wouldn’t approve such financing unless Connecticut dedicates revenue now to be pledged against the debt, Drajewicz said.

And while he didn’t offer specifics of the governor’s plan, sources said it involves electronic tolling tied to about 16 to 18 aging bridges.

Therein lies the balance the administration is trying to strike.

By scaling back the tolling system, and shifting some debt costs far into the future, Lamont hopes to entice lawmakers wary of a major tolling system.

And by acting now, the governor also said Connecticut could inject about $300 million more into its construction economy each year, on average, over the next decade. 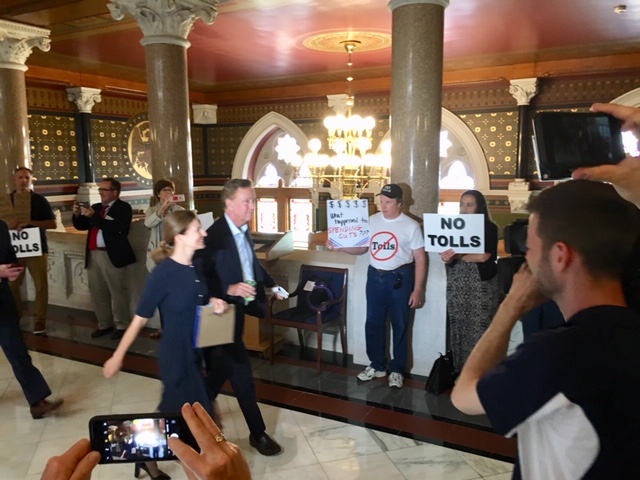 Protesters greeted Gov. Ned Lamont and Lt. Gov. Susan Bysiewicz in June as they headed to a meeting on tolls.

“Transportation infrastructure is the horse and everything else is the cart,” Drajewicz said, “If we transform our infrastructure, what will follow will be an economic rebirth for the state of Connecticut.”

Don Shubert, president of the Connecticut Construction Industry Association and a longtime advocate for tolls, said the plan only works if Connecticut raises some new revenue now to cover the debt payments that would arrive many years into the future.

“You have to be responsible and balanced,” Shubert said, urging Lamont and lawmakers to find the right mix of present-day revenue and future debt. Some transportation advocates estimate the state’s transportation capital program needs to grow by as much as $700 million per year, far more than even Lamont has proposed.

“The sooner we start addressing the shortfall, the better off we will be in terms of providing safety, relieving congestion and [spurring] economic growth,” he said.

“There is no disagreement among any of the caucuses that we need a massive infusion of cash” into the capital program,” Ritter said.

But Candelora said tolls remain problematic, and cautioned that Connecticut cannot afford to shift too much transportation debt into the future.

For one reason, required contributions into pensions for state employees and teachers are projected to rise significantly between now and 2030, despite the recent refinancing of both systems.

“Our caucus wouldn’t be interested in forcing tolls down the road. Whatever is done for transportation, it needs to be intellectually honest.”

Connecticut’s payment to the teachers’ fund alone will rise by 55% over the next decade.

If the governor’s plan locks Connecticut into hefty transportation debt payments in the 2030s, Candelora said, legislators then may have no fiscal option other than to order a much more expansive tolling network than Lamont is seeking now.

“Our caucus wouldn’t be interested in forcing tolls down the road,” he said. “Whatever is done for transportation, it needs to be intellectually honest.”

Lamont said he also fears some legislators interpret his plan to mean no decision about tolls or other revenue needs to be made in the near future.

“I did get that sense. ‘Hoo boy, thank God, we don’t have to make a decision now. We can put it off ‘cause the money’s not due for 20 years,’” he said. “That sits on our balance sheet. That crushes our credit rating. Everybody knows you have to pay back the money. My God, deal with it.”

Lamont said he is determined not to hand future governors a transportation debt balloon payment.

“Yeah, isn’t that what every governor does to the guys that come after him?” he said. “That seems to be an old habit around here. I want to break people of that bad habit.”