Connecticut flu shots are here, and officials want you to get one 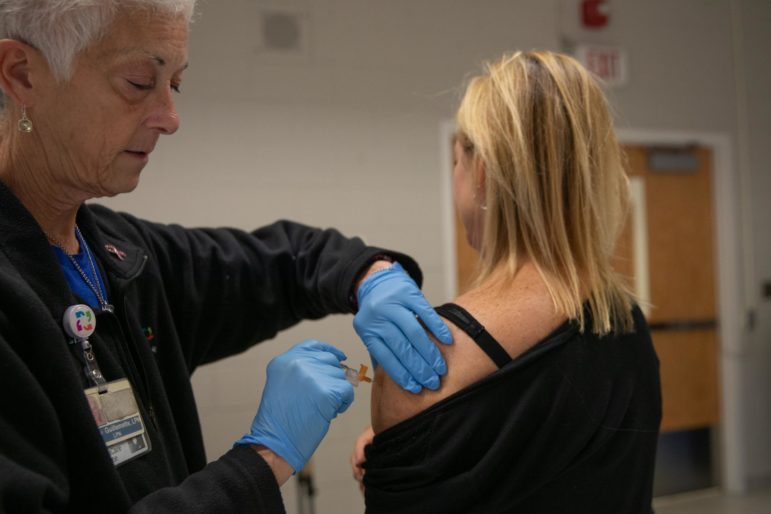 Denise Guillemette sat at a table preparing dozens of flu vaccines that she would eventually give to residents who came to a recent community clinic in Glastonbury.

“Come on down,” she called to the next person in line waiting their turn. “How are you feeling today, good?”

Guillemette, a licensed practical nurse, pulled out an alcohol wipe and cleaned a spot on Norma Carey’s upper arm. Like every year, Carey was there with her husband to get vaccinated, for two main reasons.

“One, not to get sick, and two, not to get your kids or seniors, where I work, sick,” she said.

But not everyone takes the same approach. One of the most common reasons why adults say they don’t get a flu shot every year is because they don’t believe it works, and public health officials concede that, yes — the vaccines don’t guarantee complete protection against the flu.

But Dr. William Schaffner, medical director of the National Foundation for Infectious Diseases, said maybe health providers instead should be emphasizing how much even partial protection can help.

“Even if you get influenza after having received the vaccine, you are likely to benefit by having a less severe and shorter illness,” he said, “and more importantly, you’re less likely to suffer the complications, including pneumonia, hospitalization and dying.”

Schaffner recently helped launch this year’s national flu prevention campaign in Washington, D.C. Federal officials stressed that everyone 6 months and older should get vaccinated, ideally by the end of October.

Despite evidence showing that the vaccines are effective, Schaffner said less than half of U.S. adults got vaccinated last season, and only about 63% of children did. Dr. Patricia Whitley-Williams, a pediatrician and president-elect of the foundation, said that’s concerning, considering the high numbers of pediatric flu hospitalizations and deaths in recent years.

“It did not include just children who had underlying chronic conditions,” she said. “There were healthy children, healthy babies who were hospitalized and even died from flu-related complications.”

Federal officials said they’re looking at ways to modernize how flu vaccines are manufactured so they can produce vaccines faster and with greater efficacy — both for seasonal flu and for the small, but real chance of a flu pandemic.

The last major flu pandemic happened 10 years ago. Dr. Alan Siniscalchi, coordinator for influenza and bioterrorism surveillance at the Connecticut Department of Public Health, said people may remember it as the swine flu of 2009.

“Most pandemics result when there’s a major shift in the makeup of circulating influenza viruses,” he said. “There was a recombination of a number of types of flu that created this strain which was quite different from anything that had been previously seen.”

The pandemic included thousands of cases, hospitalizations and deaths around the world. About 5,500 people became ill from the virus in Connecticut, and 35 residents died, according to DPH reports. Because of that pandemic, flu vaccines today contain antibodies for the H1N1 virus strain.

It’s unlikely another pandemic will happen again so soon, but Siniscalchi said there’s a pattern of pandemics going back several centuries that indicate what may happen in the future.

“It’s likely that before this century is out, we’ll have another worldwide pandemic as well,” he said.

The best thing people can do is get vaccinated every year, public health officials said. Connecticut on average sees a lot of flu activity — there were more than 7,000 hospitalizations between the last two seasons, according to state surveillance reports.

People most at risk of getting serious flu illness or complications are babies and young children, pregnant women, people with underlying medical conditions, and the elderly.

“This year’s vaccine for North America is promising to be a good match to the flu strains that are circulating in this area,” Siniscalchi said. “So we’re hoping going into this season that the impact will be lower.”

Siniscalchi said the good thing is that more Connecticut residents are getting vaccinated for the flu every year. About 57 percent of the total population got the vaccine last year, a jump of 10 percentage points from the previous year.

DPH also works with hospitals, nursing facilities and other offices to make sure health care employees are getting vaccinated as well.

“Especially those individuals who have direct clinical duties and working closely with patients and residents, because the last think they want to do is cause any increase in illness within that facility,” Siniscalchi said.

Flu season is just beginning in the Northeast, and there’s no way to know for certain how bad or how long it’ll last, but DPH officials confirmed that Connecticut is already seeing flu cases and hospitalizations.