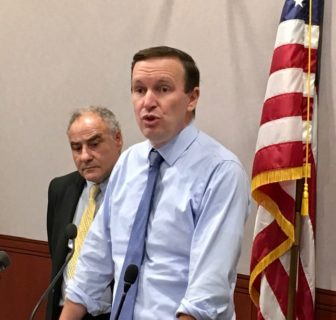 U.S. Sen. Chris Murphy and Sal Luciano, the president of the Connecticut AFL-CIO.

U.S. Sen. Chris Murphy is making his second try in four years to free millions of American workers from non-compete agreements that are defended as a reasonable protection for employers in some cases and derided in others as coercive and anti-competitive.

Many hair stylists have non-competes, keeping them from walking away from a salon with their clients. So do physicians and even home health aides. They also pop up in the fast-food industry and summer camps, preventing part-timers from seeking higher wages.

“The scope of these non-compete clauses are pretty breathtaking,” Murphy said Friday, outlining the bill at a press conference in Hartford.

The version Murphy, a Democrat, proposed in 2015 would have covered only low-wage workers, and it went nowhere. U.S. Sen. Marco Rubio, R-Florida, filed a similar bill. Murphy’s new version is far more aggressive in banning non-competes everywhere, but he says its chances of passage, while “not a layup,” are better than the original.

His co-sponsor is Sen. Todd Young, a free-market Republican from Indiana who ranks high on an index of lawmakers willing to work on bipartisan bills. (The index ranked Murphy 97th of the 100 senators in the previous Congress. Bernie Sanders was last.)

On Friday, Murphy was accompanied by Sal Luciano, the president of the Connecticut AFL-CIO, and James Bhandary-Alexander, a labor lawyer with New Haven Legal Assistance. But support can be found in places generally not in line with organized labor, including the Koch-funded and Libertarian-leaning Cato Institute.

“The issue and advocacy behind this is moving so fast,” Murphy said. “There is a movement within conservative political and economic circles to ban non-compete agreements because they are seen as fundamentally non-competitive.”

Enforcing non-competes is highly unpredictable as the legal standards for judging them hinge on “reasonableness,” wrote Alan Hyde of Rutgers University School of Law in an academic paper published by Cato under the headline, “Should non-competes be enforced?”

(He seemed to think not.)

“Some courts will routinely enjoin the departing employee from competing with the old employer simply because he or she signed a noncompete, without worrying much about the employer’s legitimate interest,” Hyde wrote. “At the other extreme are states like California and Colorado that never enforce noncompetes signed by employees. In the middle, it is very hard to guess what will be found ‘reasonable.’ ”

For sophisticated workers who can afford legal representation, non-competes may be less than binding. But what of a fast-food worker who’s signed an agreement that seems to bar him from going across the street?

“We see noncompetes often enough in industries where nobody expects to see them,”  said Bhandary-Alexander, the legal-aid lawyer. “I have janitor clients. I’ve had CNA [certified nurses aides] clients, restaurant clients, all thinking they are subjected to these non-compete agreements.”

Are they enforceable in Connecticut?

The lawyer smiled and replied, “Often they are, and often they’re not.”

Luciano, the labor leader, said he sees non-compete agreements imposed on low-wage workers as serving only one purpose — to keep wages stagnant in a nearly full-employment jobs market.

“I think agreement is a misnomer,” Luciano said. “It’s really an anti-competitive agrement that is foisted on workers by corporate CEOs.”

An estimated one in five workers are covered by non-competes, and a 2014 survey found that 12% of workers without a bachelor’s degree and making less than $40,000 were bound by them.

Eric Gjede, who tracks labor law for the Connecticut Business and Industries Association, said non-competes have a place in some low-wage industries.

“I think they are certainly more important in some industries than others,” he said. “The home care industry, they are very concerned about this. They take folks, provide training and then match them up with a client.”

Without a non-compete, the client and worker can cut out the agency, and the aide can work directly for a client, he said.

“That is certainly a concern with many industries with that type of service,” Gjede said. “I am very concerned about just a blanket ban. I think it has to be carefully done to avoid situations like that.”

Murphy, a liberal Democrat, uses a free-market argument in support of a total ban. He points to California as a case study: The state has a total ban on non-competes that he says plays a role in its thriving tech industry.

In a recent editorial opposing non-competes, Bloomberg had a similar view of California’s law spurring growth: “This policy may have something to do with the rise of Silicon Valley as a global technology hub. It attracts smart people looking to build careers and startups hoping to hire them, while the movement of talent from company to company promotes cross-pollination and innovation.”

Murphy said Connecticut is making progress building its own tech industry, often recruiting from other states. As the companies grow, he said, they should not be constrained by non-competes signed by tech workers in New York and Massachusetts.