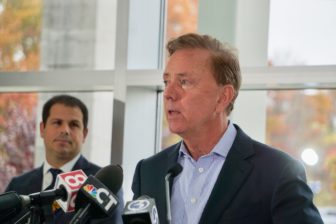 Waterbury — Gov. Ned Lamont engaged in two of his favorite pastimes Tuesday: Drawing boldface corporate CEOs, academics and philanthropists into public-private partnerships, and tilting at the silos he believes prevent government agencies from working efficiently in common cause.

Lamont signed an executive order creating the Governor’s Workforce Council, an effort to deliver on a campaign promise to bring new methods and energy to workforce development, a buzzword that suggests a holistic approach to what once was called job training. It is tasked with expanding the workforce, then matching supply with significant demand.

Surprisingly, for a state desperate for robust job growth, there are thousands of jobs going unfilled.

Some are in advanced manufacturing, but others are deemed to be medium-skilled, suggesting a potentially quick path to employment — if the workforce can be expanded. And that requires synergies not always found in government: For example, to get an unskilled single parent back into the job market, that means finding resources to provide transportation and child care, as well as education and training.

In a ceremony at Naugatuck Valley Community College, which quickly places most graduates of its manufacturing and health programs in jobs, Lamont said he sees roles for all aspects of public post-secondary education and departments of Labor, Economic and Community Development, Social Services, Transportation, and Correction, among others.

“If we train these people for the jobs that are out there, we get our economy going,” Lamont said. “We give these kids an extraordinary opportunity, and businesses know they can grow and expand right here in Connecticut.”

The chair of the new council is Garrett Moran, a one-time investment banker with the Blackstone Group and former president of Year Up, a non-profit that prepares disadvantaged youth for careers. He is a friend of Lamont’s and helped lead the governor’s transition team. 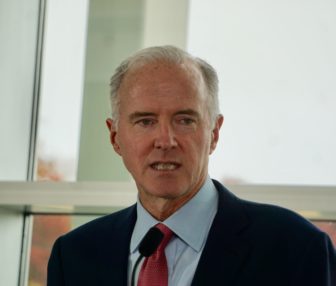 From the philanthropic and non-profit sectors are the executive director of ABCD, a community action agency in Bridgeport, and the presidents of the Hartford Foundation for Public Giving, Yale University, and Quinnipiac University. Two labor leaders are on the council, as well as Sen. Tony Hwang, R-Fairfield, and Rep. Toni Walker, D-New Haven.

“If you know anything about this administration, you get a sense of where we’re coming from with the Workforce Council,” Lamont said. “It will be another public-private partnership.”

Last week, Lamont named Colin Cooper, an entrepreneur and former aerospace design engineer as the state’s chief manufacturing officer, bringing a private-sector perspective to the task of filling advanced manufacturing jobs available due to modest growth and a coming “silver tsunami” of retirements.

Lamont has worked to establish relationships with most, if not all of the council members. Before his election, Lamont played a role in helping the Malloy administration convince Infosys, a global tech company, to open a regional office in downtown Hartford. Indeed, one of the world’s largest online employment companies, has its own workforce of more than 700 in Stamford.

“They know every job here in the state of Connecticut,” Lamont said of Indeed, whose chief operating officer, Dave O’Neill, is on the council. “They know how long it takes to fill that job. They know the skills necessary to do it. They’ll be bringing some of those analytics to what we’ve got to do.”

Moran noted that when he graduated high school in the early 1970s, three quarters of the jobs in the U.S. required only a high school education. Today, about one-third require high school, another third require college and the remaining third falls in between. These are the “middle-skill jobs,” requiring certificates for training or associate degrees.

“That has come from nowhere to be a big part of the economy,” Moran said.

Moran said the Governor’s Workforce Council must work with the private sector and government agencies on a cohesive strategy for expanding the workforce and ensuring it is ready for middle-skill jobs, a task that will serve employers and potential workers “who haven’t had a shot.”

Failure, he said, means “people will be sidetracked, and they will be out of the mainstream. And in a state like Connecticut, with a relatively static population, then we will not have the vitality we need. We have to figure out how to reach down and do that.”

Moran said the council might require a year to effect significant change.

The audience in the foyer of Technology Hall at Naugatuck Valley laughed.

“There’s good news in all this,” Moran said. “There is no mystery about how to do this work. We have some sensational examples — we’re sitting in one right today — of how to do it. It’s on us to shine a light on those who are doing this well and scale it and grow it. Rarely, have the interests of business and the disconnected been more aligned.”