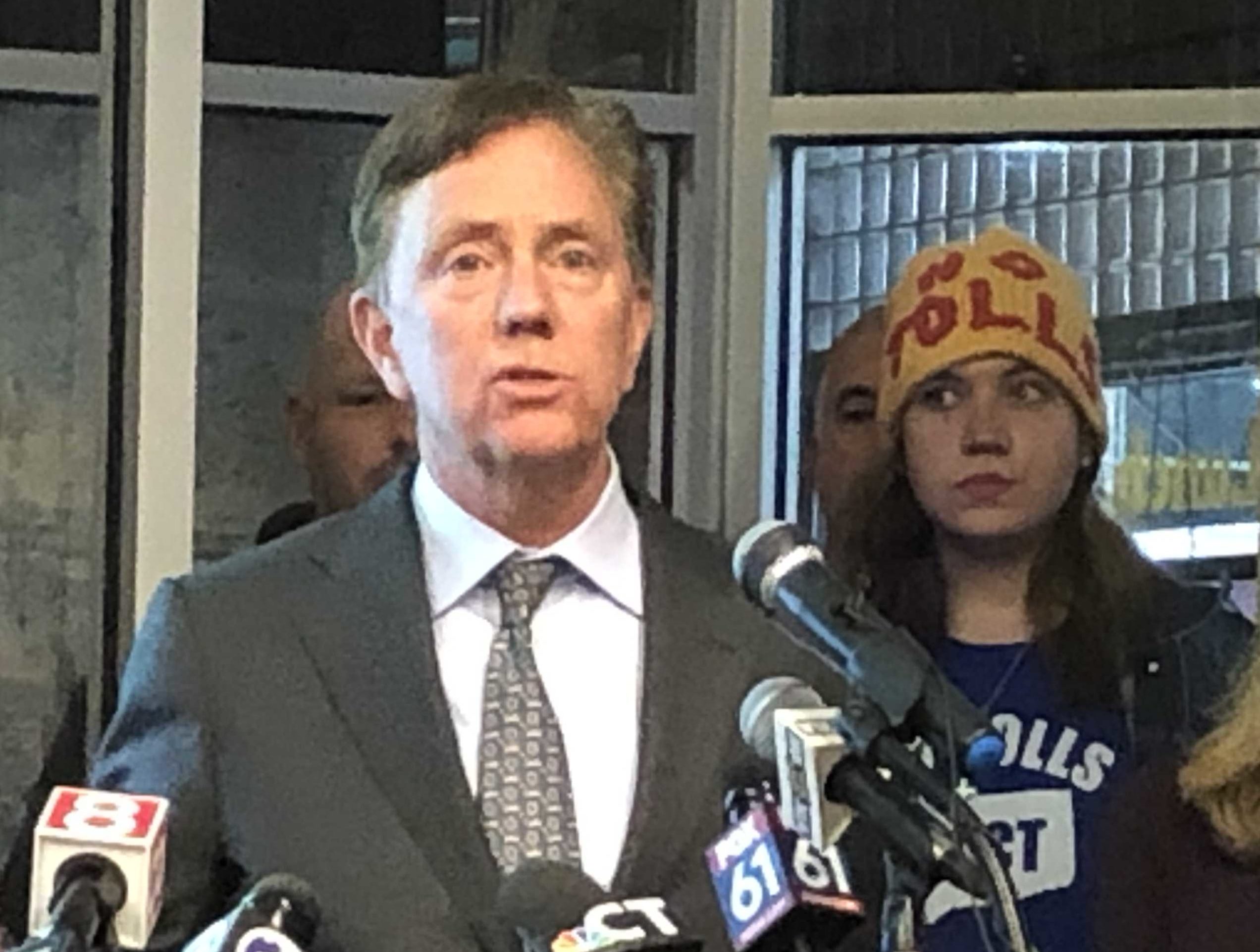 Legislative leaders are going to the Executive Residence today to talk to Gov. Ned Lamont about the prospects of passing a transportation financing bill in special session, uncertain if the governor is ready to commit to one of the two competing ideas outlined by Senate Republicans and House Democrats.

Based on his public statements in recent days, Lamont is inclined to reject a Senate Republican plan that would use nearly two-thirds of the budget reserves and instead embrace a House Democratic proposal for trucks-only tolls as a key element in a dedicated revenue stream necessary to obtain low-cost federal financing.

“I would hope at this meeting at least some lines are drawn, that everybody expresses where their lines are,” said House Minority Leader Themis Klarides, R-Derby. “Do we go forward on this or do we not?”

If Lamont endorses trucks-only tolls, lines will be drawn: With GOP leaders saying they are unalterably opposed to tolls or other sources of additional revenue, the Democratic governor presumably would then open direct talks with the Democratic majorities in the General Assembly.

But it was unclear Monday if Lamont was ready to abandon all hopes of bipartisan support for a 10-year plan of transportation improvements that he says would spark economic growth by creating 26,000 construction jobs and speeding commutes by modernizing Metro-North and eliminating highway chokepoints.

Senate Minority Leader Len Fasano, R-North Haven, said he did not know what to expect.

“I don’t know what the agenda is,” Fasano said.

Max Reiss, the governor’s communications director, declined to say precisely what the governor intends to tell lawmakers, but observed it is time for policymakers to at least broadly assess the varying approaches and talk about finding a path forward.

“It makes the most sense to sit down and discuss where we are and then make a decision about what the coming weeks and months will look like,” Reiss said.

The timing of the meeting is awkward. Lamont and many legislators plan on attending the funeral of Rep. Linda Orange, D-Colchester, in the morning, then return to Hartford to meet  at the governor’s official residence.

Thanksgiving travel plans ruled out another day this week.

The meeting today comes as a coalition of unions, construction companies, regional councils of government and chambers of commerce urged legislative leaders to enact a transportation financing scheme by year’s end.

“We believe this matter demands your utmost attention,” they said in a letter. “Despite each of you acknowledging that Connecticut is facing transportation funding challenges, the state’s transportation systems are stifling mobility and spiraling into a state of disrepair.”

They said an additional $400 million in annual transportation spending is needed to maintain a state of good repair and incidental upgrades and another $300 million is needed for projects to improve travel times.

A struggle to finance transportation for the next decade has dominated the governor’s first 11 months in office.

“There are just some issues that are very difficult to pass,” said House Majority Leader Matt Ritter, D-Hartford.

In February, Lamont proposed charging tolls on cars and trucks at 50 points on Route 15 and Interstates 84, 91 and 95. It never came to a vote. On Nov. 7, Lamont released a plan calling for 14 tolls on all motor vehicles, but Senate Republicans and Democrats leaders quickly responded that their caucuses would not support tolls on cars.

But the transportation spending priorities in his plan, CT2030, were broadly applauded. Unlike the original proposal, the new version made a case for why the projects were needed and how they would improve the quality of life in Connecticut. And the administration also added a new element: relying on low-cost federal financing.

The Democratic administration has established a working relationship with the Trump administration on transportation. The director of the U.S. Department of Transportation’s Build America Bureau visited Connecticut to brief lawmakers on available federal aid, and the governor’s chief of staff, Ryan Drajewicz, has been invited to participate next week in a Build America panel discussion in Washington.

The Senate Republican minority offered an alternative to tolls or other new revenue: Using two-thirds of budget reserves to pay down unfunded pension liabilities, freeing up $130 million in annual pension contributions that could be directed to transportation.

Lamont and Democratic legislators said they were uncomfortable drawing so deeply on reserves. House Democrats responded with a trucks-only tolls proposal, the campaign position of Lamont.

Fasano said the only fully vetted plans are the ones proposed by the governor and the Senate Republicans. The House Democratic plan is conceptual, not fully realized, he said.

“You’ve got a concept,” he said. “There are a lot of questions.”

If Lamont passes a transportation financing plan with only Democratic votes, the governor will have to compromise on his so-called “debt diet,” his insistence on spending less than $1 billion a year in new general obligation bonding. Between 2012 and 2019, the state issued an average of $1.59 billion annually in general obligation bonds.

G.O. bonds are the principal means used to finance municipal school construction, capital projects at public universities — as well as various community-based initiatives in legislators’ districts — and are repaid from the budget’s general fund. Connecticut’s bonded indebtedness per capita ranks among the highest of all states and annual payments already consume 10% of the annual budget.

The regular 2019 legislative session ended in June without Lamont and Democrat legislators agreeing on a bond package. Lawmakers want at least $1.3 billion.

The stalemate has taken a toll on Connecticut cities and towns. The state provides $150 million per year in non-education grants to communities — including a $60 million road maintenance grant used chiefly for winter snow removal — using borrowed funds obtained through bonding.