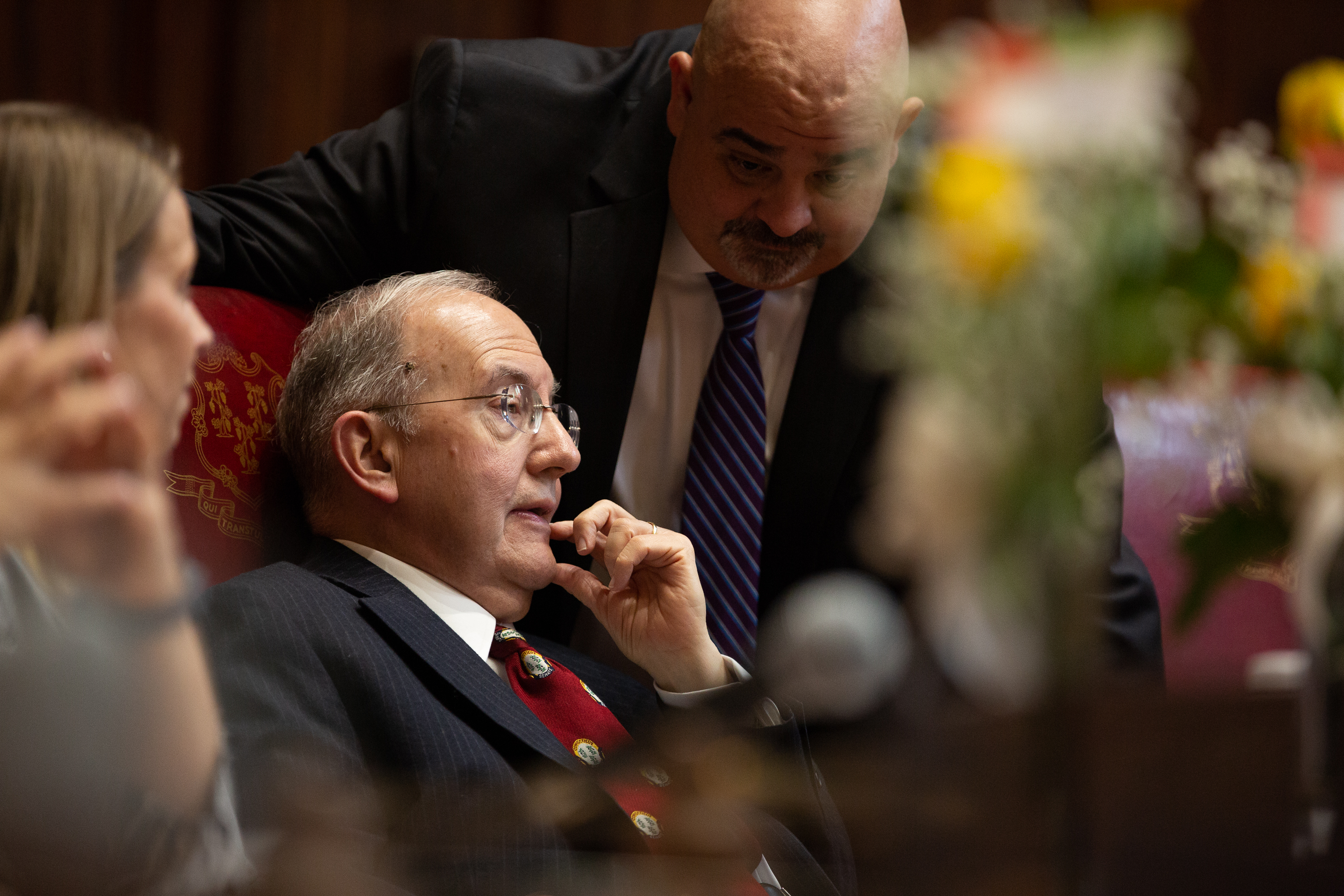 Senate President Pro Tem Martin Looney, D-New Haven, has been practicing law since 1985. He has asked the Sentencing Commission to consider reforming the bond system for accused persons.

Officials charged with making recommendations about Connecticut’s criminal justice system are considering alternatives to the use of cash bail as a means of detaining people who have been arrested.

The effort comes at the request of Senate President Pro Tem Martin Looney, D-New Haven, who asked the Sentencing Commission to make recommendations that would eliminate cash bail as a detention mechanism, decrease the number of people held in Connecticut prisons before their criminal cases are resolved, and protect the public’s safety.

Looney, who has been practicing law since 1985, said such a study is important because the current system leads to injustices and perpetuates inequities based on wealth.

“Even what might seem like a relatively modest fee for a middle class person can be prohibitively high for a lower income person,” Looney said.

Because they aren’t incarcerated, those who post bail are able to look for work or enter a treatment program in the time between their arrest and when their cases are resolved. Those who remain behind bars are not, he explained, and less able to put themselves in a position to avoid a criminal conviction.

“Even what might seem like a relatively modest fee for a middle class person can be prohibitively high for a lower income person.”

There are several ways unsentenced arrestees can be released from jail via financial means in Connecticut. Those methods include a surety bond, where a bail bondsman accepts a fee and then fronts the remainder of the bail; a non-surety bond, where a person is released without having to pay, but will be financially penalized if they don’t show up in court; and a recently restricted, so-called “cash only” bond, where the suspect must pay the entirety of their bond in full in order to be released from jail.

If people post a bond in full, they get their money back after their case has been resolved, provided they show up to court. But because most people who wind up in the criminal justice system have limited financial means, the overwhelming majority often must pay a fee to a bail bondsman, who fronts the rest of the cost.

If people don’t have the money to pay a bondsman, they sit in jail while others with the same charge and risk level post bond and are released.

“He’s not able to do anything to work with his counsel to rehabilitate himself in advance, in the eyes of the prosecutor or the courts,” Looney said, referring to that final category of suspects.

People who are incarcerated before they’ve been convicted of a crime also have an elevated risk of suicide, according to research.  And, Looney said, those who remain behind bars before they’re convicted are more likely to enter a guilty plea so they can be free.

It’s not uncommon for someone to plead guilty in exchange for being sentenced for the time they already served so they can get back to work or take care of family members. Such a decision could be beneficial in the short term, but Looney suggested it could cause problems in the future, because “that person is branded with the criminal record, that has consequences down the road, potentially forever.”

Evaluating Connecticut’s bail practices is vital, said Alex Tsarkov, the executive director of the Sentencing Commission. Keeping people locked up because they can’t afford to post bond flies in the face of the supposed integrity of the criminal justice system.

“We have to remember that everybody’s presumed to be innocent,” said Tsarkov.

States, like New Mexico, that have moved away from cash bail can still impose financial conditions as a tool for release, Tsarkov said, “but it does not exist as a detention tool.” Instead, if state officials want to detain someone they deem too dangerous to be released, a judge must hold a detention hearing to hear their legal argument. The judge can then decide whether to grant the pretrial detainment.

“We have to remember that everybody’s presumed to be innocent.”

Under the current system, Tsarkov said, there’s no way judges or prosecutors can impose detention pretrial other than using a high bond.

“It’s the only tool that’s available,” Tsarkov said, “so it’s kind of a strange area of law.”

The state constitution gives the accused a right to be released on bail. It would need to be amended for a different system to be enacted.

Connecticut’s criminal justice reforms have cut its overall prison population to historic lows in recent years, but the number of people held pretrial has not fallen to the extent that the sentenced population has. The disparity in declines makes it an important subject for the Sentencing Commission to study, said Tsarkov.

The Sentencing Commission, which is made up of judges, prosecutors and defense lawyers, is charged with making recommendations about Connecticut’s criminal justice system. Its focuses include the voting rights of people incarcerated in state prisons, reforming the sex offender registry, and identifying the number of people behind bars who have chronic mental illnesses.

The commission has researched bail before. In 2017, it produced an extensive report on pretrial release and detention and held a symposium at UCONN Law.

“We’ve learned a lot since then,” Tsarkov said, noting he and his colleagues have since visited New Jersey and Washington, D.C., neither of which have a cash bail system. “We never really stopped looking at bail practices.”

Its members also continued to recommend reforms. Earlier this year, the commission asked the Rules Committee of the Superior Court to consider a rule change that would automatically give arrestees the option of posting 10% of their bond, provided it’s $20,000 or less. They would get that deposit back once their cases are resolved, so long as they show up for court. The proposal was accepted and will go into effect Jan. 1.

Following the 2017 report, the legislature approved a bill that eliminated money bond for individuals arrested for misdemeanors, unless they have a history of not showing up to court or are accused of certain crimes. The new law also barred judges from setting cash-only bonds for those cases.

Recent state data shows there were unintended consequences of that measure.

In a committee meeting in October, the Criminal Justice Policy Planning Division’s Kyle Baudoin said there were 94% fewer people held on cash only bonds in September 2019 compared to July 2017, when the law went into effect. But as the number of inmates held on cash-only bonds fell, the total number of people held pretrial remained roughly the same. 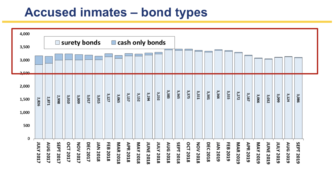 Cash only bonds have fallen dramatically since Public Act 17-145 became law, but the total number of people held pretrial stayed about the same. Source: CJPPD

“It’s a cautionary tale about what happens when you try to drop a policy change into a very complex and self-healing system that’s going to look for its own equilibrium,” Baudoin said. “There may have been some changes that you may not have foreseen.”

“We need to do an even more thoroughgoing reassessment of our system,” he said. “I think we need to look at fundamental reform.” 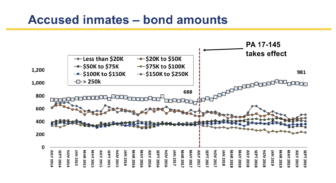