Cue the bipartisan effort to ban the question on job applications 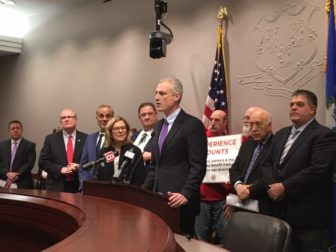 With one in four workers now aged 55 and older, Connecticut lawmakers of both parties are rallying around a relatively modest bill aimed at age-discrimination: a prohibition on employers requiring prospective employees to list their age, birth date, or graduation year on an application.

The broad and bipartisan support for the measure reflects the political clout of a Baby Boomer generation whose median age is now 62, the lack of opposition from industry and the fact that it reinforces longstanding age-discrimination prohibitions.

“Essentially it closes a very costly loophole that exists right now for older workers, because if you think about it, employers in a job interview cannot ask the job applicant their age. They cannot ask, ‘How old are you?’” said Sen. Derek Slap, D-West Hartford.

Slap, the lead sponsor and newly appointed co-chair of the legislature’s Aging Committee, was joined at a press conference Thursday by supporters, including the ranking Republicans on the committee and representatives of the Connecticut Business and Industry Association and the AARP.

The legislation is the latest effort by lawmakers to prohibit employers from using screening questions on applications. In 2016, they passed a “ban-the-box” bill barring questions about criminal history. In 2018, they barred application questions about pay history. The age-discrimination bill cleared the Labor and Public Employees Committee but did not come to a vote in either chamber.

The goal of the salary history bill was pay equity. The theory is that women historically earn less than men, so relying on pay history to set future compensation only would continue inequities. But the AARP said it also had a benefit for older workers.

Older workers seeking employment after being downsized from high-paying managerial jobs complain that many companies won’t consider them for lower-paying, non-managerial roles once they know their pay history.

The national growth in the number of older workers in the workforce represents a striking demographic shift: The percentage of 55-and-older employees — essentially the postwar Baby Boom generation — has doubled since 2000.

Slap said the impact is especially stark in Connecticut, the state with the sixth-oldest workforce.

A similar age-discrimination bill cleared the Labor and Public Employees Committee on a 12-2 vote last year, but did not come to a floor vote in either chamber. The new version makes clear that applications can require a disclosure of age when relevant, such as for commercial truck driving jobs.

Rep. David Rutigliano, R-Trumbull, who voted against measure last year in committee, said Slap reached out to a range of lawmakers and interest groups to produce a bill with broad support.

“It is a fundamental principle of mine and others, and I’m sure everybody here, that our job is to remove barriers to opportunity in employment,” Rutigliano said. “And if an age on an application stops somebody from the ability to get an interview and let their light shine in front of an employer, then I would be for getting rid of it.”

Rep. Mitch Bolinsky, R-Newtown, a member of the Aging Committee, said he had difficulty getting interviews once he lost a marketing executive post at age 54. He said his experience motivated him to run for the General Assembly.

By 2022, 35% of the American workforce are going to be over age 50, said Nora Duncan, the state director of AARP in Connecticut. A 2018 AARP survey of 3,900 workers age 45 and older found 61% had either experienced or seen age discrimination in the workplace.

“The two fastest-growing populations in the workforce are those age 75-plus, by leaps and bounds, and ages 65 to 74,” Duncan said. “So, this is real. These are folks who are in our workforce. They are also the folks who are telling us their experience in age discrimination.”