Members of the Juvenile Justice Policy and Oversight Committee will recommend to lawmakers that children younger than 12 not be tried in the juvenile court system.

Currently, minors as young as 7 who commit crimes can be referred to the juvenile courts. Under the new proposal, which would take effect in 2021 if passed by the General Assembly, children under age 12 would be spared from criminal proceedings. They would instead be handled by either the Children’s Behavioral Health Services System, Youth Service Bureaus, or a Juvenile Review Board, or receive services in the community.

Child Advocate Sarah Eagan, a member of the committee, questioned whether children younger than 12 can have criminal intent.

“In almost every kind of context I can imagine, a child engaging in that kind of behavior is a victim, not a perpetrator,” said Eagan.

Committee members approved the proposal as part of their recommendations to lawmakers for the upcoming legislative session, which begins Feb. 5.

According to data provided by the Judicial Branch’s Court Support Services Division, there were 112 court referrals of children younger than 12 in 2019. About 80% of those were for misdemeanors. The majority of the cases were either not prosecuted or not accepted. Almost 30% were put under court supervision. 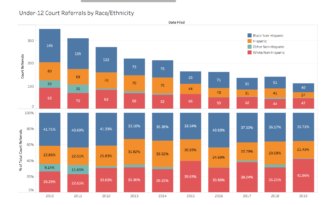 The United Nations Convention on the Rights of the Child has said criminal prosecutions of children younger than age 12 is unacceptable. Forty countries have either established or raised their minimum ages of criminal responsibility to meet those standards.

“We’re talking about 8, 9, 10, 11-year-old children that, as we heard earlier, the rest of the western world has decided belong in court zero percent of the time,” said Abby Anderson, the executive director of the Connecticut Juvenile Justice Alliance. “These are kids. And that doesn’t mean they don’t do things wrong, and it doesn’t mean other people can’t get hurt, but to criminalize them is a very, very serious thing that we are doing, and it has implications that are irreversible.”

Committee member Francis Carino, a supervisory juvenile prosecutor with the Division of Criminal Justice, raised a number of concerns about the recommendation, such as the role of victims and what to do with children whose parents don’t participate in treatment.

Carino also cautioned that changing the law could actually violate children’s rights, not protect them.

“If you’re not imposing the criminal justice or the juvenile justice system on the young people, you’re not taking away anybody’s rights,” she said. “What triggers those rights is the ability to have the court order you to do something. And under this proposal, that’s not going to happen anymore.”