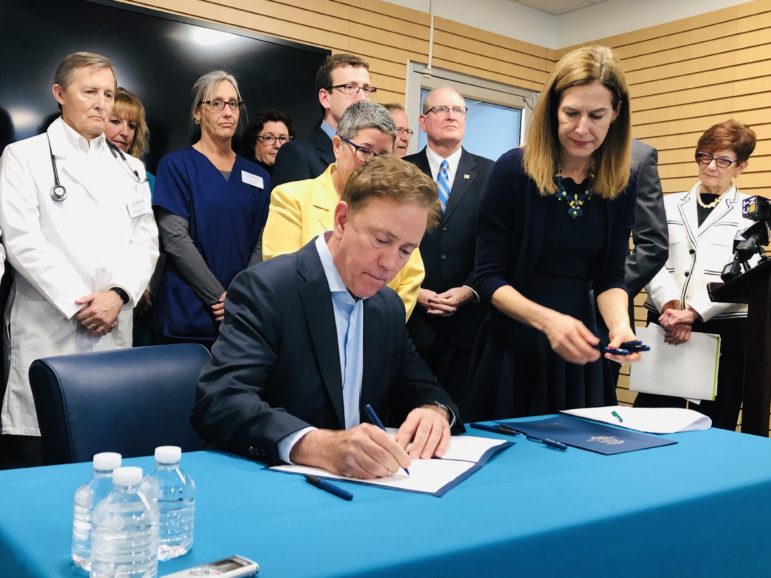 Gov. Ned Lamont, center, signed two executive orders Wednesday aimed at increasing transparency in the cost and quality of health care. He is surrounded by lawmakers and health officials.

Gov. Ned Lamont used his executive authority Wednesday to direct the state’s Office of Health Strategy to come up with annual benchmarks for the growing cost of health care – and require providers, insurers and others in the industry to report their yearly price increases.

The order is a transparency measure designed to expose the hospitals, medical practices and insurance companies whose costs soar beyond the state-imposed targets. There is no penalty for those who exceed the benchmarks, but Lamont said the annual reporting requirement will put public pressure on those agencies and companies to keep costs down.

The effort is modeled after a similar one adopted in Massachusetts seven years ago. Since the benchmarks were established there, health officials said, the state has helped consumers save more than $5 billion.

“That has slowed down the rate of increase dramatically in Massachusetts,” he added. “We hope to do the same right here.”

Under the governor’s directive, OHS will come up with cost growth benchmarks for the years 2021 to 2025 by December. It will convene an advisory team, and monitor growth in health care spending across all private and public entities. 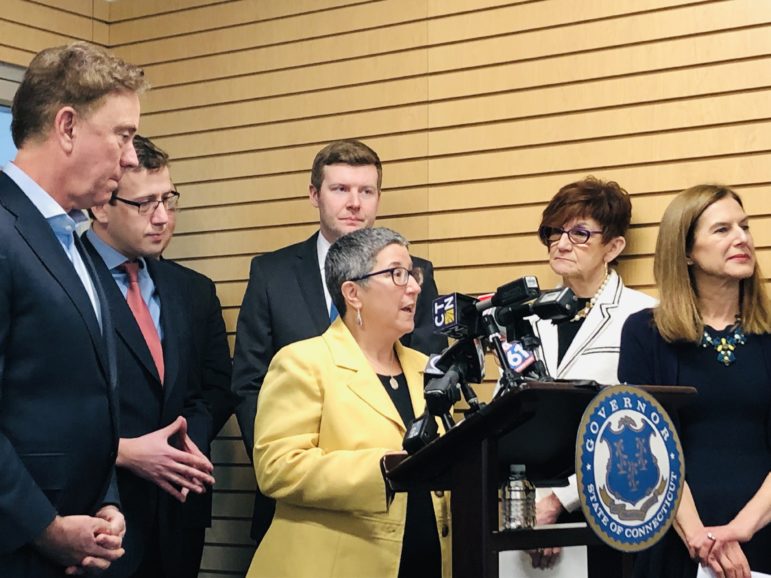 Vicki Veltri, head of the Office of Health Strategy, center, said the cost of health care in Connecticut has grown by 77 percent over the past 15 years.

The office will also develop quality targets and patient safety measures beginning in 2022.

Vicki Veltri, executive director of OHS, noted that health care costs had increased by 77% in Connecticut during the last 15 years. At the same time, utilization has remained relatively flat.

“That is unsustainable for everyone in Connecticut,” Veltri said. “Because of these increasing costs, the average family in an average year spends the same amount of money on their health insurance coverage as the cost of a compact car.

OHS will create performance improvement plans for those who exceed the benchmarks.

The cost containment strategy was first floated as part of a public option bill last year. The controversial measure ran into several hurdles and was amended to strip out the government-sponsored insurance plan. The cost benchmarking portion remained intact, however.

The bill won passage in the House but died in the Senate. The benchmarking plan was still a priority for health officials this year.

A second order signed by Lamont Wednesday requires the state Department of Social Services to create a transparency strategy for Medicaid by the end of the year. The aim is to examine the cost and quality of services over time and compare them to other state Medicaid programs.

DSS will appoint an advisory board to offer input on the strategy, and establish interventions for Medicaid members that improve outcomes and reduce disparities.