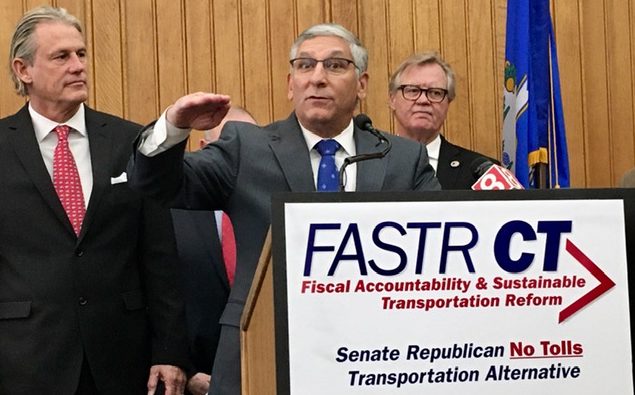 The top Senate Republican accused Democratic lawmakers Tuesday with building a “workaround” provision into the new transportation bill that would allow the General Assembly to expand tolls on large trucks to all other vehicles after two years.

“After two years, we could very well see cars and all trucks tolled in Connecticut without the fear of a bond covenant stopping it,” Fasano said during a late morning press conference. “That could happen.”

Also Tuesday, Democratic legislative leaders confirmed that Friday’s hearing on the tolls bill, set for 1 p.m. in the Legislative Office Building in Hartford, would be open to the general public as well as transportation experts and Lamont administration officials.

The only anticipated legislative support for tolls comes from majority Democrats in the House and Senate — some of whom insisted the bill provide special protections so that only large commercial trucks would be tolled, both now and into the future.

“After two years, we could very well see cars and all trucks tolled in Connecticut without the fear of a bond covenant stopping it. That could happen.”

The proposed solution involved special language to be included in the bond covenants — the contracts between the state and investors who buy Connecticut bonds that are sold to finance various bridge and highway construction work.

The draft bill lawmakers are expected to consider next week — which was prepared in consultation with state government’s bond counsel — specifies only trucks will be tolled.

It also states that construction bonds issued over the next two years include language pledging the trucks-only policy would remain in place throughout 2030.

Fasano, who is an attorney, pointed out that this alone is not an absolute legal guarantee against change.

A future legislature could refinance those bonds, paying them off early and replacing them with new financing that doesn’t include restrictive covenants.

And while “that can be an expensive proposition,” Fasano argued there was a much easier, cheaper end-run around the covenant restriction.

Section 8 of the draft measure states the General Assembly can alter the rules “if and when adequate provision shall be made by law for the protection of the holders of such bonds.”

“Connecticut voters are smarter than that. They know what this bill is and what it isn’t. This bill only authorizes tolls to be collected on heavy 18-wheeler and above commercial trucks, and explicitly prohibits tolls on passenger vehicles.”

In other words, as long as the state’s ability to repay the bonds is protected, then Connecticut could change the rules about which vehicles it tolls.

How would making cars subject to tolls, which would only increase revenues to the state, make it harder for Connecticut to pay off its debts?, Fasano asked.

He also noted that the 2007 legislature approved bonding about $2 billion to shore up the teachers’ pension fund, pledging in that bond covenant not to alter the schedule of contributions to the pension system until those bonds were paid off, around 2032.

That all changed last May when legislators endorsed a proposal from Lamont and state Treasurer Shawn Wooden to restructure pension payments. The governor and treasurer asserted this would not violate the bond covenant provided Connecticut set aside an amount equal to the maximum yearly debt payment on the bonds, about $380 million.

Connecticut, which had $1.2 billion in its budgetary rainy day fund last May — and was on its way to amassing $2.5 billion by September 30 — had no problem fulfilling that $380 million reserve requirement.

“That type of safety feature really doesn’t work at all,” Fasano added. 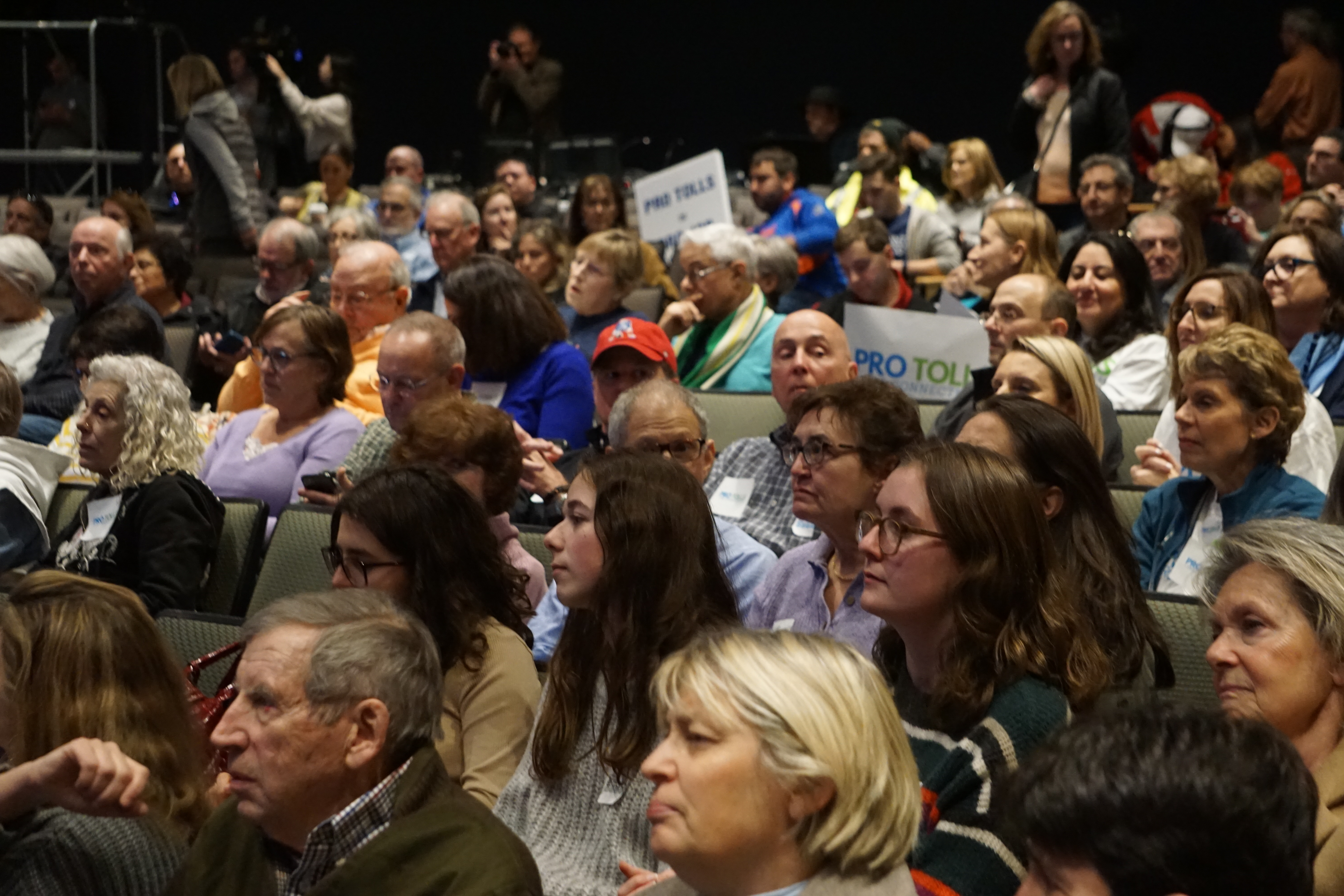 A crowd gathered in Westport earlier this month to hear Gov. Ned Lamont and others outline the state’s transportation plan.

Democratic leaders in the House did not respond Tuesday to Fasano’s charge.

But when pressed about Fasano’s concerns that lawmakers could broaden the system to include cars, Looney only insisted it wouldn’t happen for political reasons, even if it were legally permissible.

“There is broad-based opposition to passenger tolls,” he said. “I see that continuing.”

“Connecticut voters are smarter than that,” Reiss added. “They know what this bill is and what it isn’t. This bill only authorizes tolls to be collected on heavy 18-wheeler and above commercial trucks, and explicitly prohibits tolls on passenger vehicles.”

But Reiss’ statement did not address Fasano’s analysis of the potential loophole in the bond covenant.

But even if the bond covenant did not block future car tolls, that doesn’t mean the legislature will vote to approve them. Several bills to order tolls on cars and trucks have died amid strong bipartisan opposition over the past four years.

Fasano also charged Lamont with relenting on his program to curtail state borrowing to curry favor with Democratic legislators.

Lamont, who has been at odds with Democrats over borrowing since he took office in January, confirmed Monday that he’d reached a tentative deal with legislative leaders on a new, two-year state bond package.

Lamont didn’t release all the details of the two-year bond plan, but said the centerpiece is $1.7 billion in general obligation [G.O.] bonding for the current fiscal year.

G.O. bonds, which are repaid out of the budget’s General Fund, are used to pay for most non-transportation initiatives.

That $1.7 billion level agreed upon for this fiscal year is about $300 million more in bonding than Lamont initially proposed, but also about $400 million less than his predecessor, Gov. Dannel P. Malloy had requested — on average — during his eight years in office.

“That’s how you buy votes,” Fasano said. “You buy votes by making promises.”

Reiss responded that “passing a bond package along with a transportation proposal has always been the goal, as the two are inextricably linked when it comes to borrowing for both. The Lamont administration is thankful for the diligent work that Democratic legislators have put into this process and their vision to also move forward on a path to grow Connecticut’s economy, finally fix our transportation system, and address climate change through transportation enhancements.”