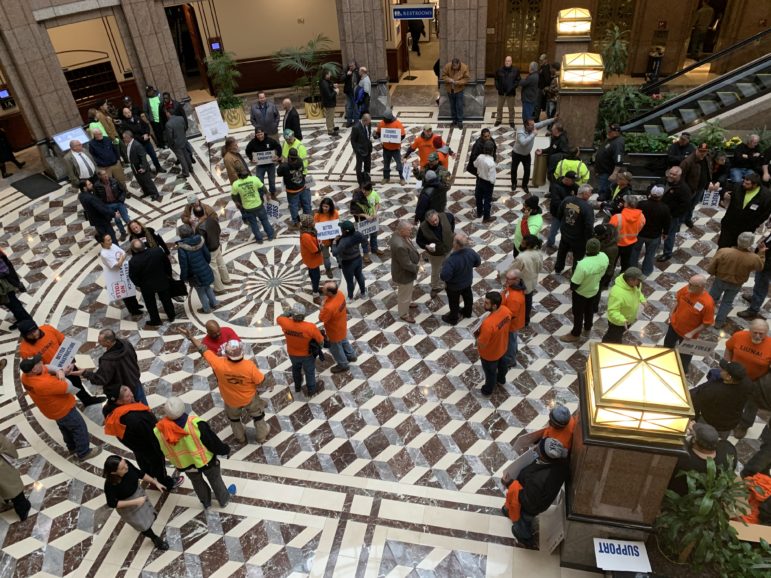 Opponents and supporters of truck tolls arrive at Legislative Office Building for a public hearing Friday. Hundreds of people signed up to testify at the hearing.

Senate and House Democratic leaders said Friday afternoon the General Assembly will vote on a tractor-trailer  tolls bill the week of Feb. 10, though they have not resolved a small detail that loomed large Thursday night when they cancelled a special session slated for next week: Which chamber will vote first?

Looney and House Majority Leader Matt Ritter of Hartford told reporters outside the governor’s office in the State Capitol they had just assured Gov. Ned Lamont that his signature first-year issue is back on track, while hundreds of opponents and supporters lined up in the Legislative Office Building to testify on the bill at a public hearing.

The annual 2020 legislative session opens Wednesday, and a vote on the transportation financing bill so early in the session would require Looney and House Speaker Joe Aresimowicz of Berlin to deem it an emergency-certified bill, a status that exempts the measure from further review by legislative committees or another public hearing.

“Sometimes there’s distrust issues between the House and Senate.”

House Minority Leader Themis Klarides, R-Derby, and Senate Minority Leader Len Fasano, R-North Haven, said the Democrats are intent on finding a process that minimizes public vetting of the legislation before a full traffic and fiscal analysis can be completed.

“This is beyond irresponsible,” Fasano said. “How dare you?”

Looney and Ritter said they had votes for passage, and both tried to minimize the obvious question raised by the inability to quickly determine where the bill would come to its first floor vote: The obvious distrust between the chambers, each controlled by Democrats.

Asked if he trusted Ritter and House Speaker Joe Aresimowicz of Berlin, Looney said, “I do.” 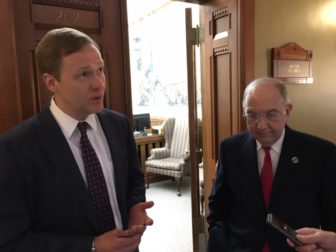 Rep. Matt Ritter and Sen. Martin Looney said tolls are back on track.

Ritter, who stood next to Looney outside the governor’s office after a half-hour meeting, said the issue is less with leadership than some rank-and-file members. “Sometimes,” Ritter said, “there’s distrust issues between the House and Senate.”

“I think it’s just there are elements of both caucuses who want  their votes to be final action,” Looney said.

Lamont shook off the previous night’s cancellation, saying his fellow Democrats assured him they had sufficient votes, and the only challenge was to find a day when every lawmaker supporting the measure would be available. Democrats have solid majorities of 22-14 in the Senate and 91-60 in the House, but every Republican is opposed.

Democrats can survive the loss of four Democratic votes in the Senate and achieve an 18-18 tie that would be broken by Lt. Gov. Susan Bysiewicz. In the House, they need to keep 76 of their 91 members on board.

“I feel as confident today as I did yesterday, as I did the day before that,” Lamont said. “I just met with the leaders and had a good discussion about scheduling, when we can do this.”

The bill, which is available on line, would authorize the state to charge tolls on tractor trailers at 12 highway bridges. 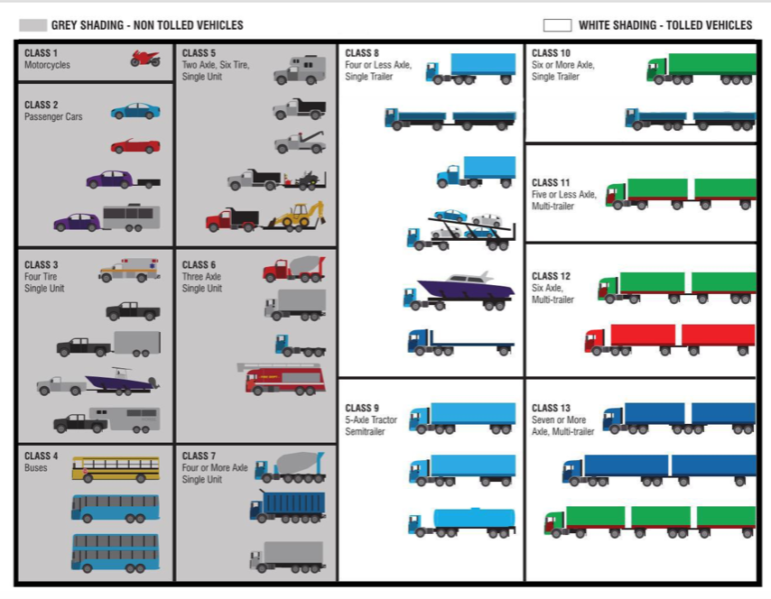 Tolls would be charged on trucks in Class 8 through 13. The classes shaded in gray would not be tolled.

The opening hours of the hearing Friday were consumed by questioning of the governor’s top fiscal official, Secretary Melissa McCaw of the Office of Policy and Management, and the state transportation commissioner, Joseph J. Giulietti

Administration officials warned that if lawmakers fail to find new revenues for infrastructure before the next recession — or before the transportation program falls into deficit in five years — Connecticut’s economy stands to lose tens of billions of dollars.

“The Special Transportation Fund is in crisis,” McCaw told the legislature’s Transportation Committee at Friday’s hearing. “It needs a suitable, reliable revenue stream. The current situation is untenable.”

The fund is financed by fuel taxes and various fees, and it pays for debt service on transportation bonding and the operating costs of the Department of Transportation and Department of Motor Vehicles. Between state borrowing and matching federal grants, Connecticut spends about $1.6 billion per year on highway, bridge and rail repairs.

The $19.1 billion investment Lamont is supporting for the coming decade “will be transformative for our economy,” Giulietti testified.

About $172 million in annual toll receipts, coupled with additional sales tax revenues dedicated to transportation, would prop up the Special Transportation Fund.

“The current situation is untenable.”

The plan crafted by Lamont and Democratic legislators  would take advantage of low-interest federal financing, with interest rates close to 2%, to minimize borrowing costs over the coming decade.

“These are very, very aggressive rates,” Giulietti said. “The best we’ve ever seen.”

Economic studies have shown Connecticut’s congested highways and rail lines cost businesses and residents a collective $4.2 billion to $5 billion annually in delays and other complications, McCaw said, adding it’s a price the state has been paying for years.

The Metro-North commuter rail system has slower running times than 50 years ago, said Giulietti, the former president of Metro-North.

McCaw warned that if the lawmakers do not act now, the prospects of modernizing transportation infrastructure would be vulnerable to an economic downturn. A delay of five or six years could cost the economy as much as $30 billion, McCaw said. And for those who believe the next economic crisis is many years away, McCaw said, the current Special Transportation Fund still won’t be sufficient to address future needs.

The STF’s longtime revenue sources — fuel tax revenues and various motor vehicle fees — are growing at less than 3% per year while transportation costs are growing by 4%, McCaw said. If toll receipts or some other revenues aren’t added to transportation, the STF would fall into deficit by 2025, she said.

“Major bridge work” is needed at all 12 of the highway structures where toll gantries would be located under the plan, Giulietti said. The tolls would go into effect in 2023.

“It may be trucks today, but we all know it will be cars tomorrow. Sadly, the trust is broken and we have had enough.”

Republican legislative leaders pushed back Friday against the Democratic governor’s plan, calling it a first step to a broader tolls plan, though that would require the passage of a second transportation bill, most likely after 2023 and requiring a legislative consensus that now seems unfathomable.

“It may be trucks today, but we all know it will be cars tomorrow,” said Patrick Sasser, founder of No Tolls CT, who said the need for tolls is decades of fiscal mismanagement of state finances. “Sadly, the trust is broken and we have had enough.” 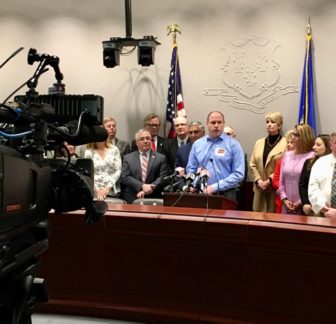 Patrick Sasser, center, a No Tolls leader, was featured at press conference with GOP lawmakers

Democrats have tried to underline that passenger tolls are permanently off the table by proposing bond language barring them.

But Klarides said such language would be worthless: Wall Street never would try to enforce them, since investors in bonds want only one thing: “They want to be paid.”

Rep. Laura Devlin, R-Fairfield, noted that the 2007 legislature approved about $2 billion in bonding to shore up the teachers’ pension fund, pledging in that bond covenant not to alter the schedule of contributions to the pension system until those bonds were paid off, around 2032.

The language was not binding, she said.

The governor and treasurer asserted this would not violate the bond covenant as long as Connecticut set aside an amount equal to the maximum yearly debt payment on the bonds, about $380 million. Connecticut, which had $1.2 billion in its rainy day fund last May — and was on its way to amassing $2.5 billion by September 30 — had no problem fulfilling that $380 million reserve requirement.

“Trust and transparency, honestly, those are two of the biggest issues that are causing angst and problems within the general public.”

The Lamont administration projects that at least 50% of the truck tolls receipts would be paid by out-of-state truck drivers, a factor that Hartford Mayor Luke Bronin said should be persuasive.

“It’s like going to the store, seeing a 50% discount, and saying, ‘No, I would rather pay full price,” Bronin said. “The bottom line is we have to make investments now. They have to be big. It is our only chance to be competitive.”

But Kurt Lindeland, who runs Connecticut Mulch Distributors in Enfield, said plenty of Connecticut companies will pay a high price, his among them. His company owns 38 trucks and makes 11,000 trips annually in the state.

The administration tried to minimize the impact on Connecticut businesses by exempting all classes of trucks other than tractor trailers, and no truck would be charged more than once a day at any one gantry.

Unions turned out members to support a transportation financing plan that they say will produce jobs in a depressed construction industry. American Trucking Associations filed written testimony reminding lawmakers that trucks-only tolls in Rhode Island are facing a legal challenge by their industry.