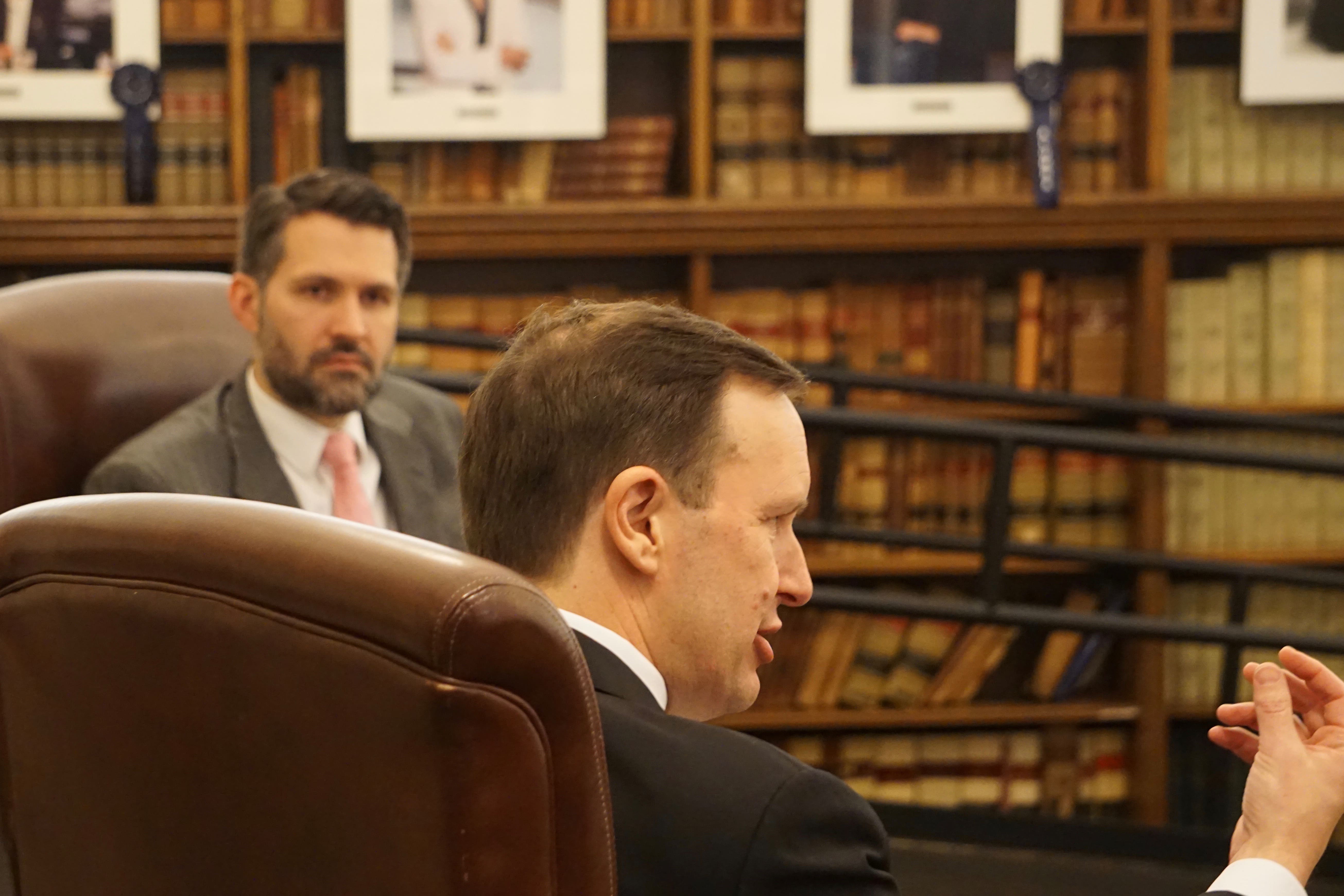 Hartford — U.S. Sen. Chris Murphy is a Watergate baby. Not one of the young Democrats elected to Congress in 1974, but an actual child of the 70s, born to Republican parents three weeks after America learned of the White House taping system that would fuel a bipartisan groundswell leading to the resignation of Richard Nixon.

Murphy, 46, is among the sharpest Democratic critics of Donald J. Trump, a frequent guest on cable news and Sunday network chat shows. His Tweets are quoted in the New York Times and available to 887,500 followers. He’s been on Twitter since May 2010, two years longer than he’s been in the Senate.

But for his first public appearance since the Senate acquitted the president Wednesday, Murphy opted to go old school. No sound bites, no Tweets. On Thursday night, he sat in a leather wingback chair in a crowded reading room at the UConn School of Law, talking and fielding questions for 90 minutes about his vote to remove a president from office.

“I thought it was important for me to come back to Connecticut as soon as the vote concluded to explain to you why I chose to make the vote that I did and to have a discussion about how I got to that conclusion,” Murphy said, delivering brief prepared remarks at a podium, then settling in for more than an hour of questions.

It was a homecoming for Murphy. He graduated from the law school in 2002, while a member of the General Assembly. It was there he met his wife, a fellow student. 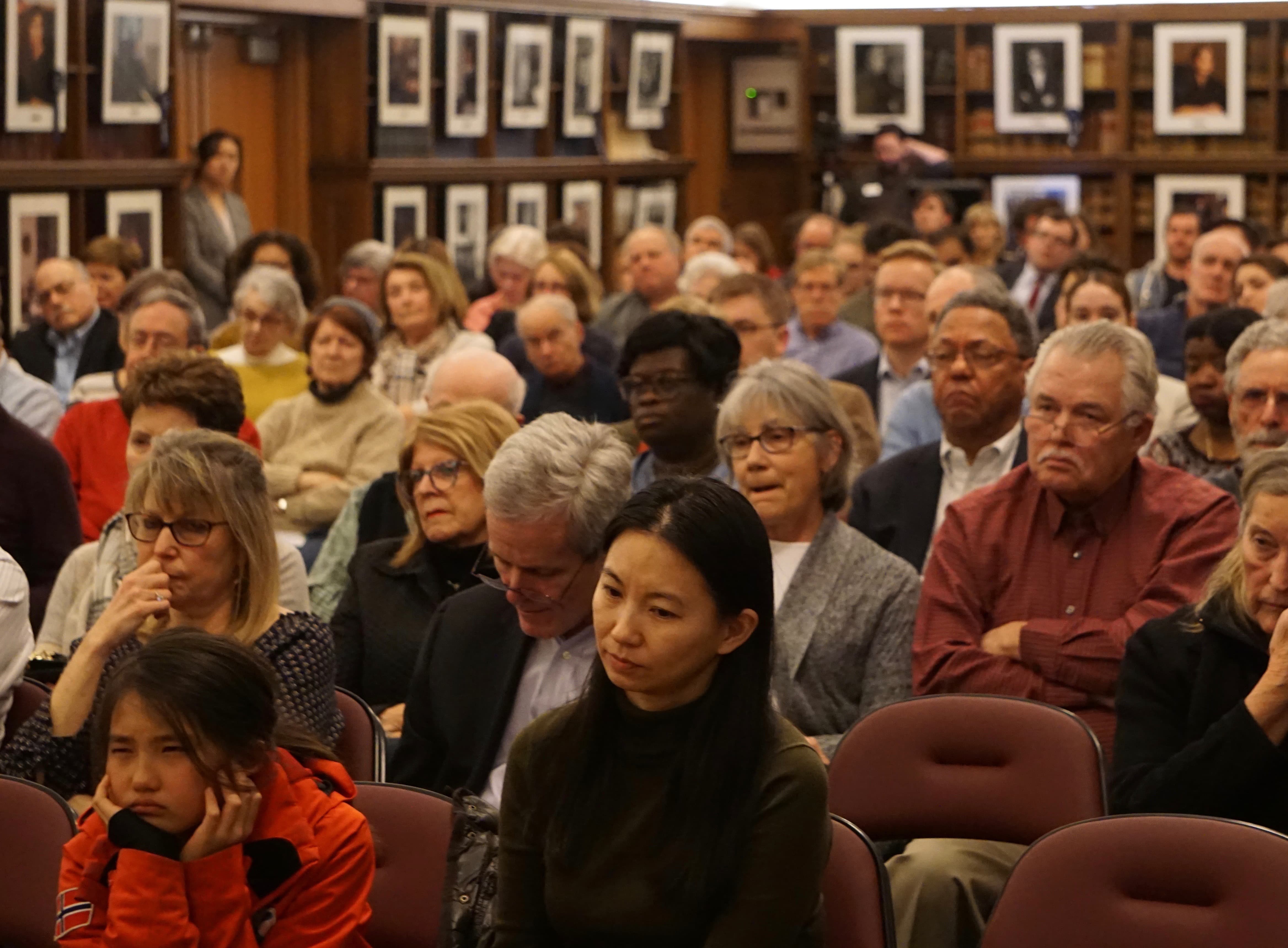 The senator’s audience at UConn School of Law.

Murphy entered the room to loud and sustained applause, a reminder that his audience was less interested in why he voted to remove the president than what it means that a majority of the Senate did not. He was attempting the tricky business of trying to find historical context for an unfolding contemporary political drama.

“I want to start frankly by talking about the vote of another United States senator, one that frankly got much more attention than mine did yesterday,” Murphy said. He was talking about Mitt Romney, the only Republican to vote for the president’s removal, a colleague he got to know during a trip to Israel last spring. He called him a friend.

Murphy said he grew emotional listening to Romney explain his vote, knowing the abuse that was certain to come from the president and the GOP.

“My conjecture is he wonders whether American democracy can recover from this episode,” Murphy said. “I think that he wants to make sure that if our normalization of this abuse of power ends up with the democracy that we’ve become accustomed to burning down to the ground, that he does not want this name on the list of the arsonists.”

Murphy was subdued, even wistful, as he talked about being born during the Watergate hearings, when his seat was held by Lowell P. Weicker Jr., the first Republican member of the Watergate committee to call for Nixon’s resignation. As a whole, he said, the Senate back then chose to act as a protector of democracy, exposing a president’s abuse of power. 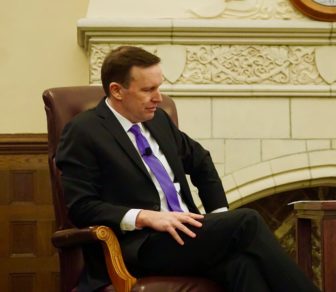 U.S. Sen. Chris Murphy talked about impeachment for 90 minutes at his alma mater.

This time Republicans did not rebut the notion that Trump had withheld crucial aid to the Ukraine while the president was pressuring the nation’s newly elected leader to help discredit one of Trump’s Democratic rivals, former Vice President Joe Biden.

“I fear that my colleagues in doing this fail to protect the Republic,” Murphy said. “It’s not like the Republicans didn’t see this coming. It’s not as if this president turned into somebody new after he took the oath of office. One of my Republican colleagues said during the campaign of 2016, speaking of President Trump, ‘He’s shallow. He’s ill-prepared to be commander in chief. He’s crazy. I think he’s unfit for office.’ ”

Murphy eventually pivoted from bemoaning the Republican support for the president to trying to explain it, suggesting that some saw the attacks on Trump as a liberal media and deep-state bureaucrats piling on, undermining all conservatives.

Trump has become their proxy, he said.

“To them this trial is an example of this threat,” Murphy said. “They say this to you not in that direct way in private conversations. But they say it. They say it in bits and pieces.”

Hours earlier, the president made clear his thoughts centered on payback, not conciliation. “It was evil,” Trump told cheering supporters at the White House, his remarks televised live. “It was corrupt. It was dirty cops. It was leakers and liars, and this should never ever happen to another president, ever. I don’t know that other presidents would have been able to take it.”

Later, Murphy said the Democrats need to spend time understanding the GOP point of view about Trump and the effort to remove him.

“I don’t agree with their assessment that the deep state and the media are out to get Republicans,” Murphy said. “But I do think we need to have a conversation about why we are on different planets today.”

No one in the Senate is ready for that conversation on either side of the aisle, he said.

“That was a really, really heavy room for two weeks,” Murphy said. “There were less conversations happening between Democrats and Republicans than at any time before in my service. I think there’s a lot of really raw emotions coming out of the impeachment trial. And I think it’s going to take a little while for us to be able to get back to talking to each other in a functional way.

“We’re human beings, and we saw the president’s actions completely differently. and I just think that’s created a little distance that we have to figure out how to deal with.”