A total of 1,665 Connecticut children under age 6 had lead poisoning in 2017, a drop of almost 17% from the year before and the largest one-year decrease in five years, according to a just-released report from the state Department of Public Health (DPH).

But more children showed higher levels of the toxin in their blood than in 2016, the report says. In 2016, there were 105 children whose blood lead level was 20 micrograms per deciliter of blood or higher, at least four times the measure at which they’re considered poisoned. In 2017, the number had risen to 120 children. 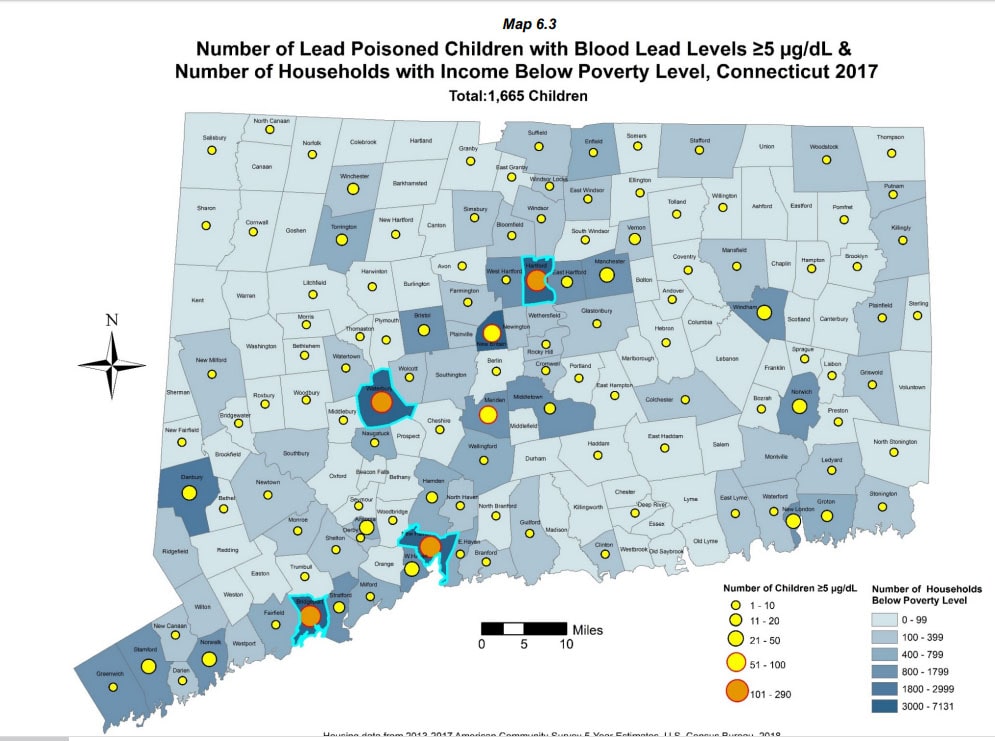 The 2017 report is the DPH’s fifth since the Centers for Disease Control and Prevention (CDC) tightened its standards defining lead poisoning. CDC’s previous standard was 10 micrograms per deciliter of blood. The CDC now says that a child whose blood test shows 5 micrograms of lead per deciliter or higher is poisoned. It always adds that no level of lead in the blood is safe. Connecticut amended its own standard to mirror the CDC’s in 2013.

New Haven, Bridgeport, Waterbury and Hartford, in that order, had the highest numbers of children with elevated blood lead levels in 2017.  Nearly half of all Connecticut children with lead poisoning in 2017 lived in those four cities.

New Haven’s rate was significantly higher than the other three cities’ rates, including Bridgeport, the state’s largest city. There were 290 New Haven children under age 6 who were lead poisoned in 2017. Forty percent—or 175 children—were new cases.

Although Bridgeport had the second-highest number of lead-poisoned children, 2017 was the city’s fifth consecutive year of declining numbers. Bridgeport reported 209 children with lead poisoning in 2017, compared with 402 children in 2013.

Racial and ethnic disparities in lead-poisoning numbers decreased somewhat, according to the report, especially among young Hispanic children. DPH officials said the state’s lead program and the Latino and Puerto Rican Affairs Commission partnered in a media campaign that targeted the Hispanic population in 2016 and 2017. This resulted in lower numbers, although Hispanic children are still 1.4 times as likely to be poisoned as non-Hispanic children.

Black children remain more than twice as likely to have lead poisoning as white children. 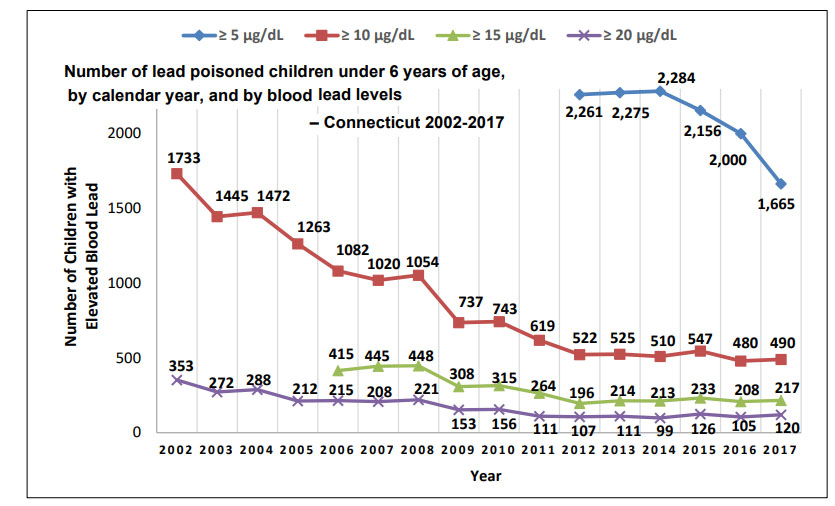 Exposure to the heavy metal can damage cognitive ability, including an irreversible loss in IQ points.  Lead poisoning is linked to speech and developmental delays, hyperactivity, hearing loss and behavioral problems, although these may not show up until years later.

The continuing lead problems in Flint, Mich., started several years ago when the city switched its public water source.  Lead poisoning in older cities in the Northeast is usually attributable to lead paint, which was widely used before being banned by the federal government in 1978.

Even when older homes are painted over, paint chips can be leaded. Babies and toddlers, the most likely victims of lead poisoning, are also especially developmentally vulnerable to its harmful effects. These vital developmental years are defined by children’s hand-to-mouth exploring, making them more liable to ingest flaking paint chips. Another hazard is lead paint dust, created by doors and windows in older housing opening and shutting, grinding down the paint. Soil near the base of older, dilapidated buildings is also frequently contaminated.

The DPH report said that every Connecticut child had at least one lead test before turning 3, but state law requires two tests, one annually. Connecticut has struggled to reach its testing goal, although its numbers inched up to 57.4% in 2017.

This story was originally published Feb. 11, 2020, by the Connecticut Health Investigative Team.