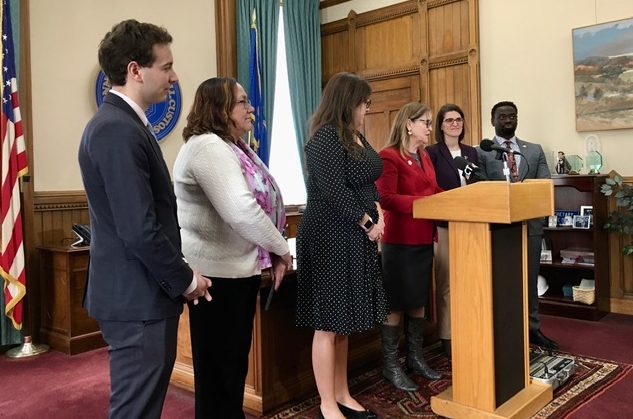 Secretary of the State Denise Merrill, flanked by legislators on the GAE Committee, explains her voting bill. Others not in attendance have endorsed the measure.

Secretary of State Denise Merrill is making a new push for legislation that would extend voting rights to parolees, codify in state law the automatic voter registration now offered by the Department of Motor Vehicles, and expand election-day registration.

Sen. Mae Flexer, D-Windham, co-chair of the Government Administration and Elections Committee, said Thursday that the panel’s 2020 priority was passing Merrill’s bill, a version of which passed the House last year, but never came to a vote in the Senate.

“It should be a top priority of the entire General Assembly to make sure our elections are accessible and open to every voter in this absolutely critical election year,” Flexer said at a press conference with Merrill and other committee members, all Democrats.

Voting rights are automatically renewed in Connecticut for convicted felons who owe no fines and either complete their prison sentences or are released on probation. But Connecticut is the only New England state not to extend voting rights to parolees, who generally number between 2,000 and 3,000 people in most years.

“If you’ve served your time and you’re released from prison, you should be able to vote in Connecticut,” Merrill said. The bill would restore voting rights to anyone convicted of a felony and who is not incarcerated.

House Republicans disagreed last year. When that notion came before the House, it passed, 85 to 60, with every Republican and one Democrat in opposition.

The bill also would allow communities to offer more than one place where people could register to vote on election day and guarantee them the right to register and vote if they were on line before the polls closed at 8 p.m. Registered voters already are guaranteed a right to vote if they reach the polls before 8 p.m.

Election officials reported long lines to register on election day in college towns two years ago. Some students were on line for hours, but never got to register before 8 p.m. Students are permitted to be registered either in their hometowns or where they live while in college.

“I have seen firsthand dozens of people in the town of Mansfield turned away at 8 p.m.,” said Flexer, whose district is home to the University of Connecticut in Mansfield and Eastern Connecticut State University in Willimantic. Merrill, a Democrat, once represented Mansfield as a member of the House.

More than 60,000 voters have been able to register, change their registration to a new address, or fix administrative issues since election-day registration was first offered in 2013, Merrill said. The law allows one registration site in every town on election day

Registrars recommended last year that towns be allowed to conduct election-day registration on college campuses in addition to town or city hall.

At the direction of the U.S. Department of Justice, the Department of Motor Vehicles has offered automatic voter registration since 2016 to comply with the federal Help America Vote Act. It has produced 400,000 new voters.

But state election laws never were changed to conform with the new policy.