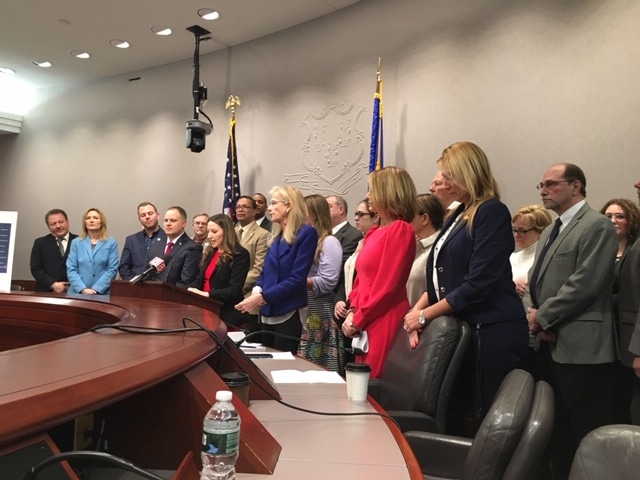 Members of the Waterbury Line Caucus call for mass transit investments in the Naugatuck Valley.

A bipartisan group of lawmakers, many of whom helped block Gov. Ned Lamont’s plan to increase funding for transportation with truck tolls, called on the governor and legislature Monday to deliver millions of dollars in improvements to the Waterbury Line of Metro North.

“We’re done talking. We want action,” said House Minority Leader Themis Klarides, R-Derby. “The state of Connecticut needs this, not just the region that we’re from. It needs it, because it will push the state forward.”

At a press conference and then at a public hearing before the legislature’s Transportation Committee, legislators and municipal officials made a case for investing in mass transit in the corridor running from Bridgeport to Waterbury and beyond.

“We’re done talking. We want action. The state of Connecticut needs this, not just the region that we’re from. It needs it, because it will push the state forward.”

“It was an impressive showing, no doubt,” Rep. Roland J. Lemar, D-New Haven, the committee co-chair, told the last of the legislative witnesses. “We all believe that investments in transportation pay off.”

Then he smiled and added that reaching a consensus on investment is easy, while agreeing on how to finance those investments is not.

Every lawmaker who testified at the public hearing in support of Naugatuck Valley transportation investments was opposed to tolls, and no one suggested sources of new revenue that could subsidize an expansion of rail service through their districts.

The lawmakers want the state to invest $150 million in rail cars and a maintenance facility.

Max Reiss, the communications director for the governor, said Lamont is in complete agreement with the lawmakers on the potential for improved rail service and transit-oriented development to spur economic growth around six stations on the 27-mile Waterbury Line.

“No governor in Connecticut history has proposed the kind of infrastructure improvements for the Waterbury Line that were proposed by Gov. Lamont,” Reiss said.

But, as Reiss noted, the governor’s proposed transportation investments for the Naugatuck Valley came with a call for new revenue, originally tolls on all motor vehicles and, more recently, only on tractor trailers at a dozen highway bridges.

“We all believe that investments in transportation pay off.”

CT2030, the governor’s transportation infrastructure plan, called for more than $19 billion in improvements that the administration says are necessary over the next decade to return roads and bridges to a state of good repair and shorten car and rail commute times.

Last week, the governor effectively walked away from truck tolls after Senate Democrats postponed a tentative vote. With House and Senate Democrats refusing to go first on a tolls vote, Lamont said he was moving on to alternatives. A short-term fix is likely to be reserving at least $200 million in general-obligation borrowing for transportation, a step that will squeeze funds for other capital projects. 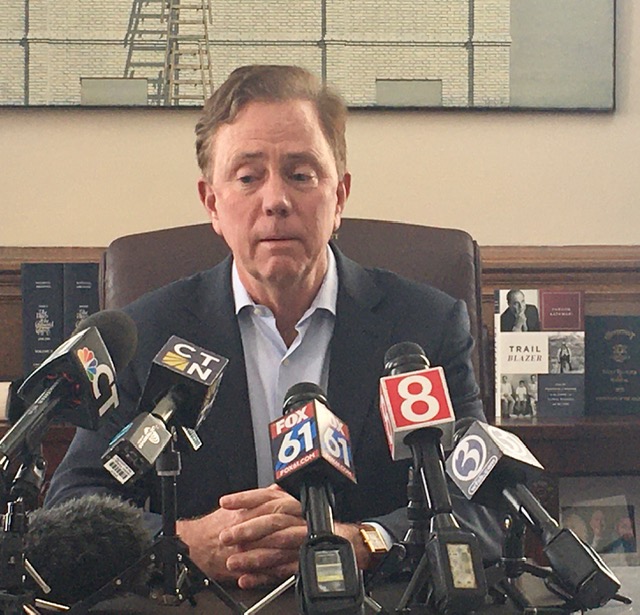 Gov. Ned Lamont called a press conference last week to announce the end of his bid to get tolls legislation passed this legislative session, declaring “I have lost patience.”

Truck tolls would not have contributed directly to rail improvements: The plan abandoned last week called for toll gantries on a dozen highway bridges, with the revenue restricted to paying for debt service on repairs to those structures. But new funding for bridges would ease demands on the state’s underfunded Special Transportation Fund, which uses taxes on fuel and  motor vehicles, as well as various transportation-related fees, to pay for other transportation operating and capital costs.

Sen. Joan Hartley, D-Waterbury, said at the press conference that the Waterbury Line is deserving of a greater share of existing transportation investments.

“There has been far too long that this rail has not be tended to,” Hartley said. “And so, that’s an issue of parity.”

With or without new revenue, the state should be pursuing low-cost financing from the federal Railroad Rehabilitation and Improvement Financing program, which has been making railroad infrastructure loans since 2002, Hartley said.

“No caucus has had a bill they were able to get through. If we all agree transportation is a problem, we all should share in the failure of that.”

Railroad operators have shied away from the program, citing upfront applications costs and uncertain timelines for approval, according to a report published by the Congressional Research Service in January 2018. Of the 37 loans made, two-thirds were executed prior to 2008, and only four have been approved since 2012.

Lemar, a mass-transit advocate who often takes the train from New Haven to Hartford, said it was encouraging to hear so many legislators extolling the virtue of transit-oriented development.

Mayor N. Warren “Pete” Hess III of Naugatuck said developers have identified nearly 240 acres of developable land within a half-mile of the six stations on the Waterbury Line. With the appropriate transit investments, the region could become an economic engine, he said.

The state already has invested $90 million in a positive control safety system on the line, he said.

“Your investment is totally wasted if we don’t have the trains. We can’t make it happen,” Hess said. “We can’t have TOD, we can’t have what everyone else has with the train cars.”

Collectively, Democrats and Republicans have proposed five transportation financing plans, though none has come to floor vote in either the House or Senate.  Lamont originally proposed a comprehensive tolls system for cars and trucks that could have raised as much as $800 million annually. It was downsized twice, ending with a trucks-only plan raising about $175 million.

The GOP has declined to support any plans with tolls — or any other form of new revenue.

“No caucus has had a bill they were able to get through,” said House Majority Leader Matt Ritter, D-Hartford. “If we all agree transportation is a problem, we all should share in the failure of that.”