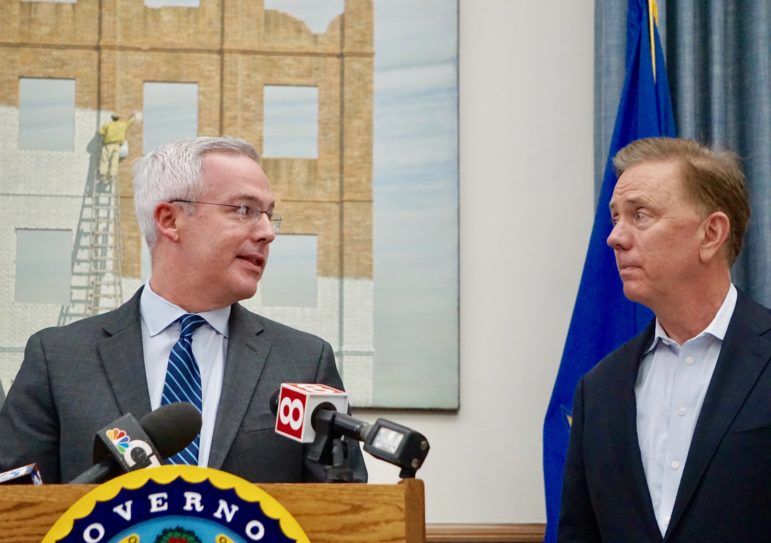 Ryan Drajewicz with Gov. Ned Lamont as they announce Drajewicz’s exit as chief of staff.

One of Gov. Ned Lamont’s highest-profile recruits from the private sector, Ryan Drajewicz, is leaving the administration after 13 months as the governor’s chief of staff, a long-rumored departure resulting in a reshuffling of two other appointees, Paul Mounds and Josh Geballe.

Mounds, the chief operating officer and deputy chief of staff, succeeds Drajewicz, giving the governor a top aide with a deeper well of political contacts inside the State Capitol. Geballe, a former IBM executive who has been tasked with reorganizing and modernizing government as commissioner of administrative services, will continue that project as the commissioner and the state’s chief operating officer.

The changes come on the heels of a signal failure: The administration’s abandonment of a year-long campaign to win passage of some form of highway tolls to finance CT2030, a 10-year transportation infrastructure program Lamont deems crucial to economic growth.

Drajewicz’s exit does not appear forced as he has confided for months his plan to leave in February, once the tolls issue was resolved. Drajewicz acknowledged Thursday the resolution was not the one he envisioned: On Feb. 19, Lamont effectively gave up on Senate Democrats ever putting his plan to a vote.

By all accounts, the governor and chief of staff had developed a close relationship. Chief of staff is a job that requires a political sense, management skills, and an ability to serve as a reliable conduit between the governor, the legislature and the rest of state government.

Lamont, who called Drajewicz a brother, recruited him from the giant hedge fund, Bridgewater Associates

“I said, ‘Please give us a year. I need a year.’ And he said he’d give us a year. And he gave us a year plus some,” Lamont said. “And I just want you to know that as chief of staff he’s been my friend, been my compadre. He talks me off the ledge when I ought to be talked off the ledge. He comes with me into battle when it’s time for battle.”

On transportation, Drajewicz said, he believes he followed the governor’s charge to “leave everything on the field.”

He said the efforts produced a well-received plan for what needs to be done to speed up commutes by erasing highway bottlenecks and improving rail service on Metro-North, even if the legislature could not embrace tolls as a new revenue sources.

The administration still intends to utilize the low-cost federal loan programs that were identified as a key element of CT2030, though it will have to find new sources of guaranteed repayment. “I can tell you with confidence Connecticut is going to take advantage of these programs that are offered out of Washington,” Drajewicz said. 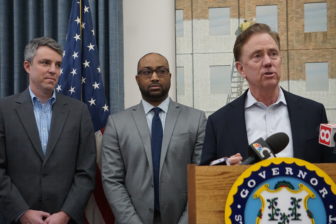 Drajewicz, a former aide to U.S. Sen. Chris Dodd before he joined Bridgewater Associates, stepped down as Lamont’s top aide at the end of business Thursday, but he will remain for a few weeks to ease the transition. Drajewicz said he has no immediate plans, other than a likely return to the private sector.

He worked for Lamont for nearly 18 months as a volunteer or staffer. Lamont had tapped Drajewicz during his campaign to craft a transition plan, then chose him to oversee the assemblage of a new administration and become his chief of staff.

“It’s a year and a half, almost, in dog years,” Drajewicz said.

Lamont and Drajewicz each arrived at the State Capitol with few close relationships in the building, and Drajewicz conceded this was an obstacle as the new administration quickly sought passage of a comprehensive system of highway tolls on all vehicles. The plan was twice downsized, most recently to trucks only tolls on a dozen highway bridges.

Drajewicz said he has developed those relationships “in the trenches” during the long fight over transportation. Had he started with them, the path might have been smoother, he said.

His successor, Mounds, was an aide to Gov. Dannel P. Malloy for five years, leaving the administration in late 2016 as the director of policy and government affairs for a policy and communications job at the Connecticut Health Foundation. He also worked on the staffs of U.S. Sen. Richard Blumenthal and U.S. Rep. John B. Larson.

“Paul, as you all know, he knows the building, and the building knows him,” Lamont said. “And if I’ve learned one thing, this is a building that really runs on relationships.”

Mounds was first named to the newly-created post of chief operating officer, a position recommended and never implemented decades ago in Connecticut, while becoming increasingly common in governors’ offices across the U.S. Last summer, he was also given the title of deputy chief of staff in an earlier staff shakeup.

Geballe, a former IBM executive and tech entrepreneur, has a resume more fitting with COOs in other states, where governors have looked to corporate executives and state agency heads for the post.

“In many ways, Josh has already been acting like a COO, which is the chief operating officer, trying to consoldiate personnel, consolidate technology, leading the search of what this government is going to look like with the silver tsunami of people retiring,” Lamont said.

Demographics and a change in retirement benefits are expected to send a sizable chunk of the state workforce out the door by the end of Lamont’s first term.

By the estimates of the comptroller’s office, 14,764 state employees — a quarter of the workforce — will be eligible to retire on July 1, 2022, when a concession deal negotiated in 2017 by Malloy takes effect. It will slow cost-of-living adjustments for all new retirees and raise health costs for a few, primarily high earners.

The governor was asked Thursday if more changes were coming.

His reply: “Not at this point.” 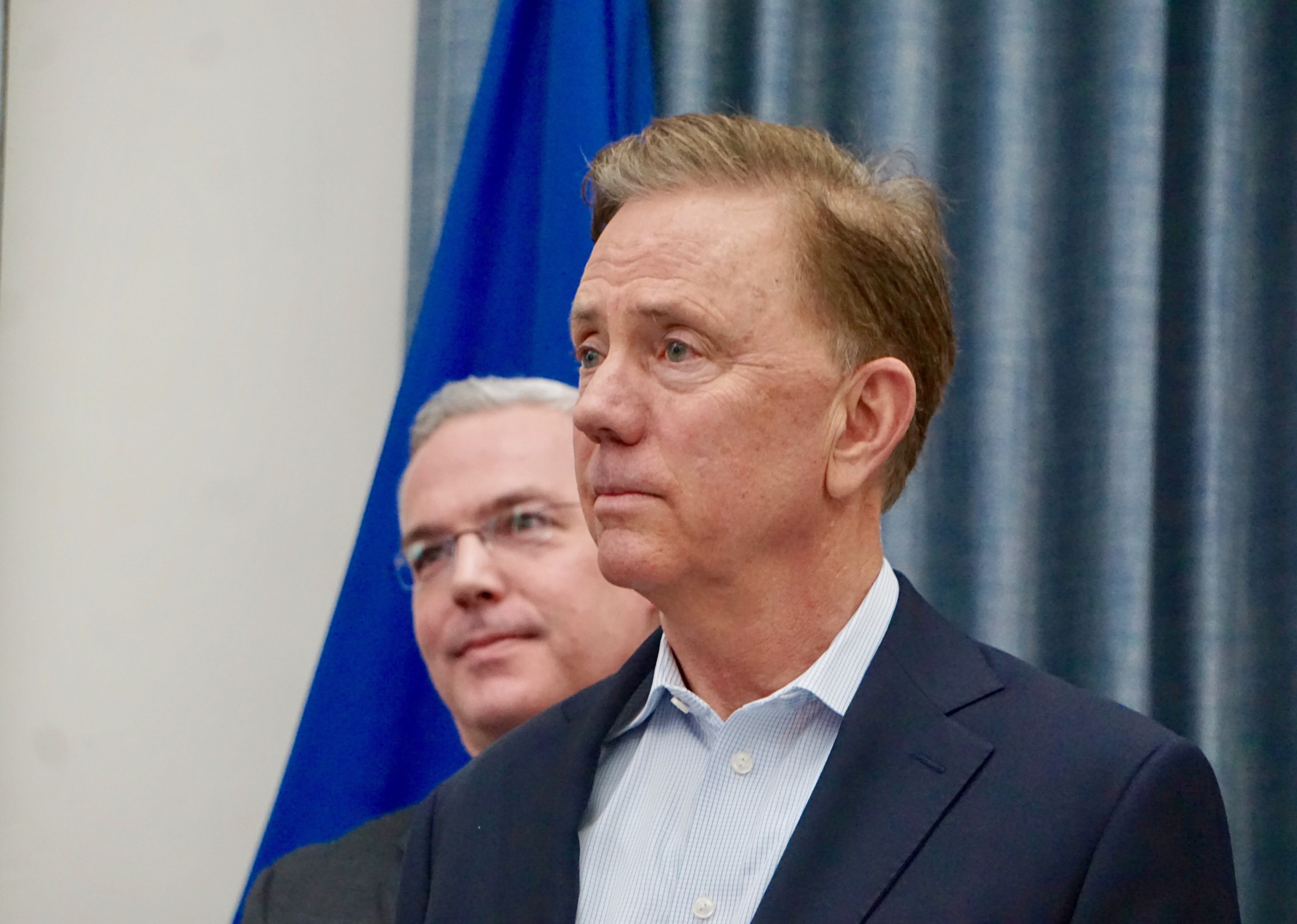