A tighter ethics code? Maybe third time is the charm. 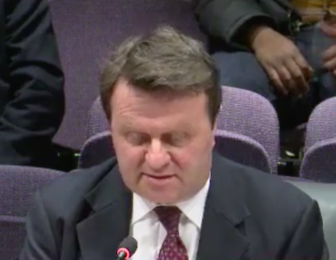 Peter Lewandowski of the Office of State Ethics reading testimony that lawmakers have heard before.

Civics teachers, try asking this on your next pop quiz: What parts of the state ethics code stop Connecticut’s part-time lawmakers from voting for legislation or otherwise acting in a way that provides a financial benefit to their private employers?

OK, it’s a trick question. There is no such prohibition.

The code currently bars legislators from voting on matters that uniquely provide a monetary gain to them. There is no conflict unless the gain is greater for them than is realized by any other member of the same profession, occupation, or group.

In other words, a plumber could vote to exempt plumbing supplies from the sales tax, something that would benefit every plumber. He could even vote for a tax break that only would benefit his plumbing company, so long as he did not have an ownership interest.

The Office of State Ethics is proposing a modest change: Lawmakers still could act on matters uniquely benefitting a company that provides them or their spouse with a paycheck, but they would have to disclose the conflict and declare in writing why it was in the public interest for them to vote on the matter.

“The purpose of this requirement is to create transparency in the process,” said Peter Lewandowski, the executive director of the Office of State Ethics. “It does not further limit the actions of the elected official.”

To whom, you might ask, are they proposing this?

That would be the Connecticut General Assembly. The Office of State Ethics is responsible for enforcing the ethics rules, not writing them. Ethics rules affecting legislators are written by legislators and set in state law.

The ethics proposal was the subject of a brief public hearing Friday before the legislature’s Government Administration and Elections Committee, where some version of the measure has been pitched for the past decade. It cleared the committee on a unanimous vote last year.

Versions were passed unanimously by the Senate in 2017 and 2019, only to languish on the House calendar without a vote.

“We’ve been gaining traction,” said Lewandowski, who was named director last year after 13 years as a staff attorney.

No one asked a question.

The standard for conflicts of interest has remained unchanged for more than a decade, at least as it applies to rank-and-file lawmakers.

About two-thirds of state lawmakers typically hold jobs outside the State Capitol. Legislative salaries range from $28,000 for the rank-and-file to $38,689 for the leaders, plus an expense stipend of $4,500 for House members and $5,500 for senators.

Recusals by lawmakers are rare. When they occur, they usually are voluntary, an effort to avoid the appearance of a conflict, not an actual one as defined by state law.

John Kissel of Enfield and Kevin Witkos of Canton, two Republican senators employed by the power company, Eversource, recuse themselves from energy bills, though they are not required to do so.

In 2017, a state representative, Melissa H. Ziobron, lobbied her colleagues to support a bill crucial to the survival of her husband’s employer, the Millstone nuclear power station. A lobbyist publicly objected, but she was doing nothing wrong under the ethics code.

House Speaker Joe Aresimowicz, D-Berlin, is employed by Council 4 of AFSCME, a major public-employees union. But the code does not bar him from voting on contracts negotiated by AFSCME or bills favored by the union, as the office advised him in December 2016 before he became speaker.

“In sum, there is simply nothing in the Code— nor in the more than thirty-five years of precedent interpreting it— that would bar Representative Aresimowicz from serving as Speaker while engaging in his pre-existing employment relationship with the union, or from taking official action on union matters in the absence of a direct financial impact on himself or his family members,” he was told in a written opinion.