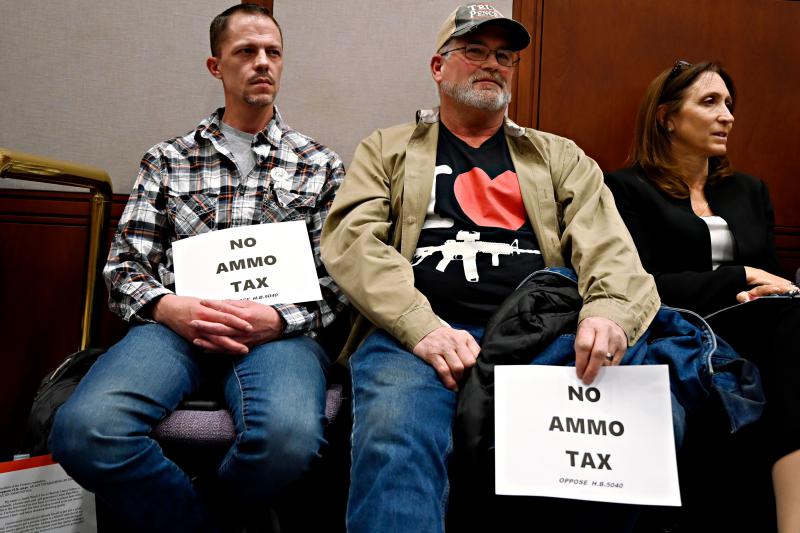 Jamie Ward of Bozrah (left) and Ben Kratzert of Burlington make their wishes known during a hearing on H.B. 5040, An Act Establishing an Excise Tax on Ammunition, Thursday.

A proposal to make gun owners pay a 35% ammunition tax drew a crowd of opponents to the Capitol Thursday to testify that the bill violates their Second Amendment rights and unfairly targets their hobbies and lifestyles.

The tax would also apply to online sales in Connecticut. Law enforcement, correction and military personnel would be exempt from the tax.

Gilchrest said she does not view the tax as a punishment or penalty for gun owners or as a deterrent to ammunition purchases. But she says gun violence is expensive — costing the Connecticut economy $1.2 billion a year, according to the 2019 State-by-State Examination of the Economic Costs of Gun Violence conducted by the congressional Joint Economic Committee.

Given that guns come with a cost, Gilchrest said, gun owners “should pay a little more to support prevention efforts targeting urban communities.” 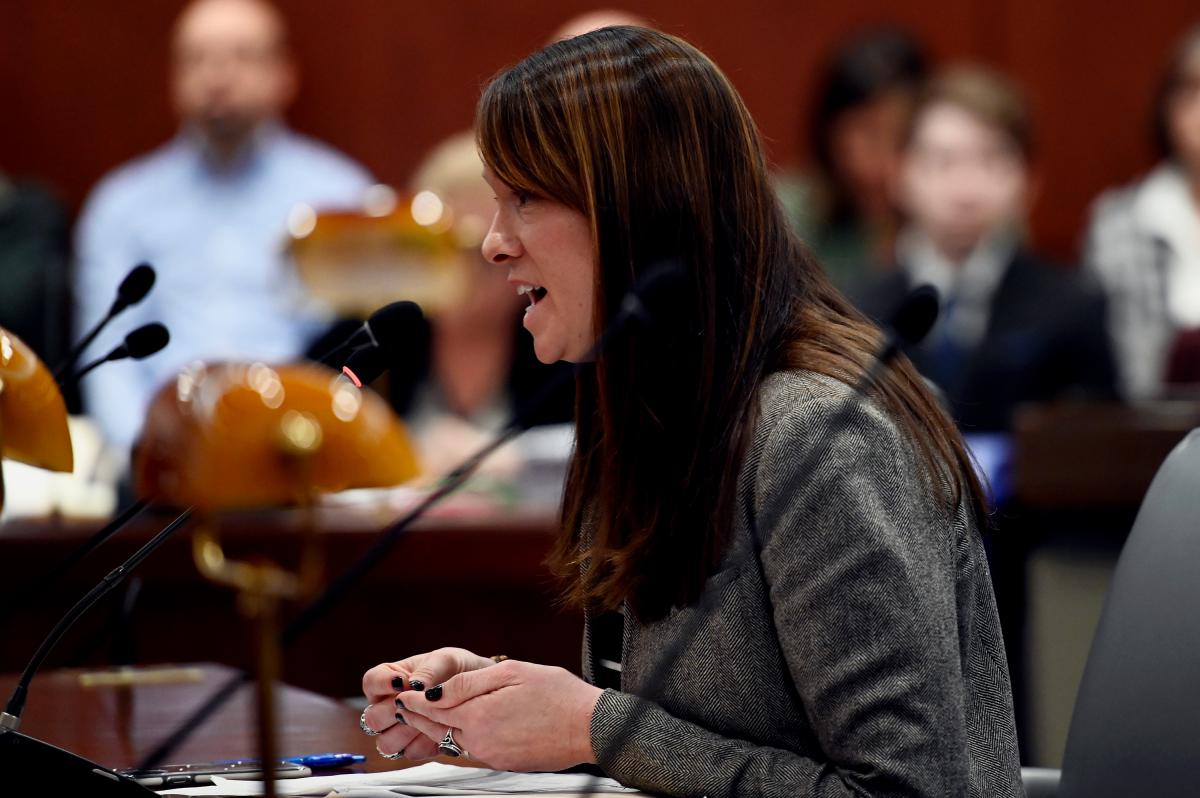 State Rep. Jillian Gilchrest speaks about her bill at the public hearing.

Opponents of the bill crowded the Legislative Office Building to testify against the bill.

“The most important reason for this committee to deny this tax is that our right to keep and bear arms includes ammunition,” said New Milford resident Mark Conrad. “It is an integral and essential part of any firearm.”

“We’re your neighbors, your co-workers and your friends,” Storms said. “We didn’t create the problem of gun violence, and it’s relatively rare that any of us contribute to it. Now you want to place most of the burden on us to finance what amounts to a scavenger hunt for solutions.”

And Storms questioned the $1.2 billion figure Gilchrest uses when talking about the cost of gun violence.

“I’d like to see it broken down into line items because I’m skeptical,” Storms said.

Other concerns cited Thursday included the bill’s potential to harm small business owners and patrons, from gun shops to shooting ranges and safety classes. Opponents also were concerned that the new tax revenue would be used for anti-gun political advocacy and not gun violence prevention work.

Gilchrest introduced a similar bill during the last legislative session. That one came with a 50% tax, modeled after the state’s cigarette state, but it was unsuccessful. On Thursday, she fielded questions from members of the Finance, Revenue and Bonding Committee for close to an hour. Rep. Vincent Candelora expressed concern that the estimated revenue could fall short.

State Sen. Heather Somers, R-Stonington, testified in opposition of the bill, highlighting that many of her constituents in low-income, rural areas rely on hunting to put food on the table. Others said they need firearms to protect themselves in parts of the state that don’t have their own independent police departments. 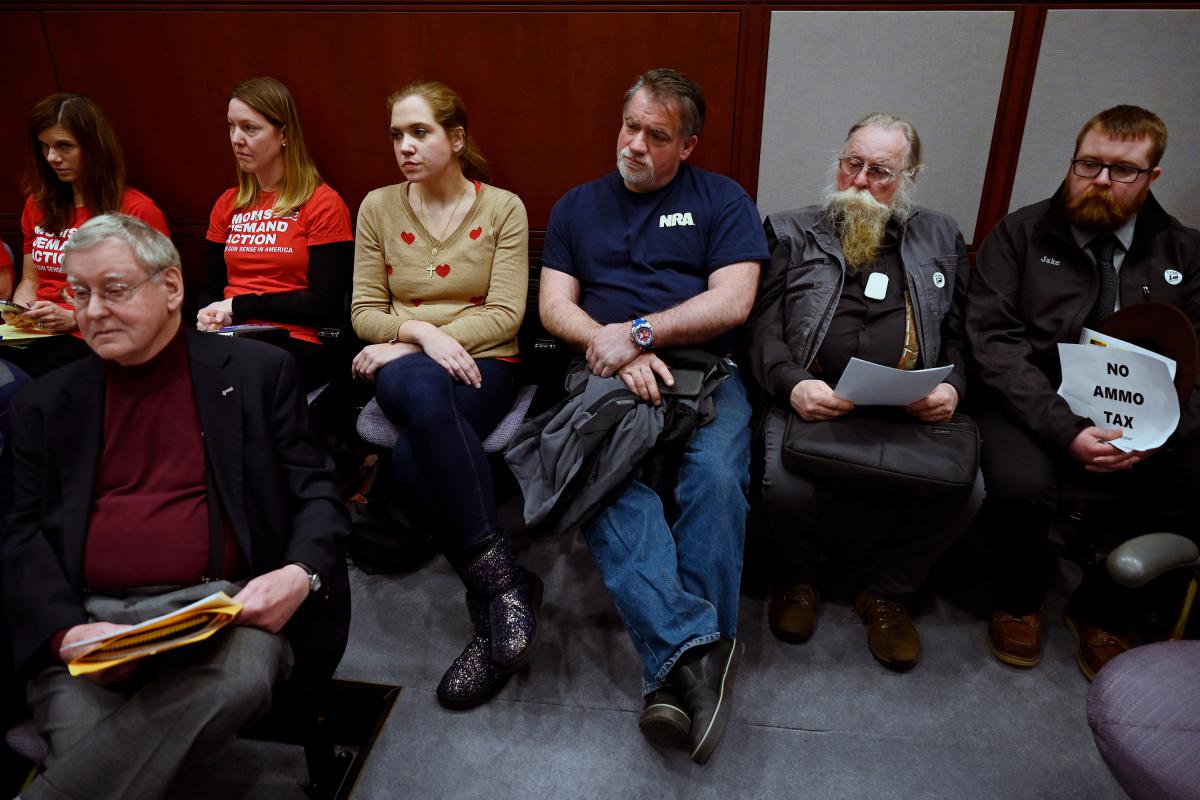 Supporters and opponents sat side by side as the debate over the bill stretched into the evening.

But the bill also had its supporters. Darien resident Susan Vogel, who’s a member of the Connecticut chapter of Moms Demand Action for Gun Sense in America, said the bill could benefit community organizations like Project Longevity, Mothers United Against Violence and Street Safe.

“We need these tireless, dedicated community-based gun violence prevention organizations working to reduce gun violence in our cities,” Vogel said. “And we need to provide them with the financial resources necessary to break the cycle of violence and care for the victims and survive when violence does occur.”

Brent Peterkin, the statewide director of Project Longevity, noted that if $55 million from the general fund can be appropriated for renovating Hartford’s XL Center, lawmakers could do the same to fund gun violence prevention organizations.

Excise taxes on ammunition are not new. A federal excise tax on ammunition and the import and production of firearms has existed since 1919, but few states, cities or counties have levied additional taxes.

More than 600 people submitted written testimony in opposition to the bill; there were fewer than 20 letters of support.