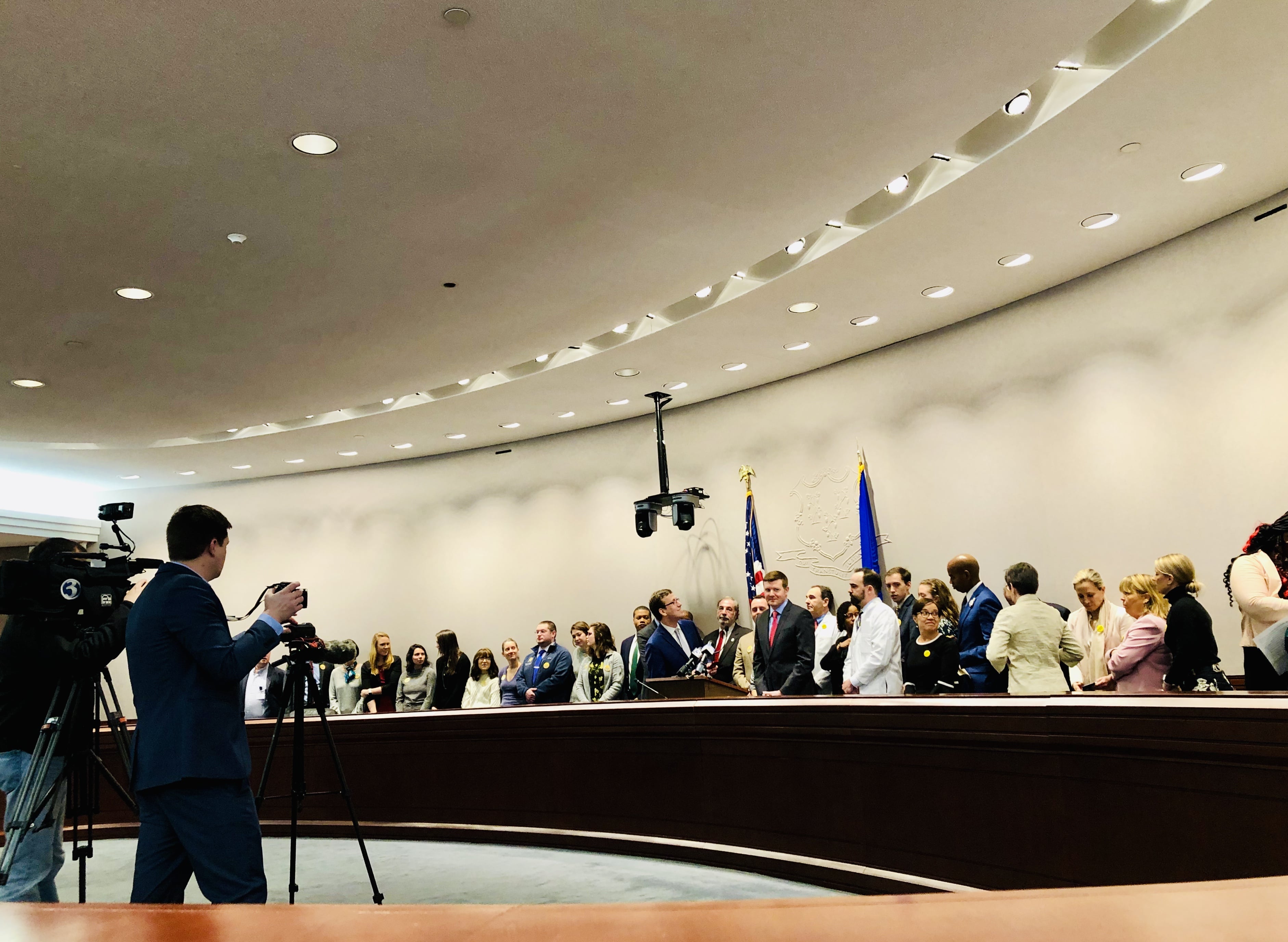 Despite long odds in a session that lasts only three months, lawmakers on Thursday rolled out the newest version of their “public option” bill, saying they were not discouraged by the limited timeframe and lack of support from key Republicans and the governor.

The latest iteration of the proposal to expand government-subsidized health insurance would allow businesses with 50 or fewer employees, nonprofits of any size and labor unions to join the state-operated Connecticut Partnership plan, which already is available to municipalities.

“Nobody thinks health care is easy,” said Sen. Matthew Lesser, D-Middletown, a co-chair of the Insurance and Real Estate Committee. “We’re doing it because it’s important and because lives are at stake.”

Few details about the plans were available Thursday. Comptroller Kevin Lembo, whose office would underwrite the program, said the public option policies would have “common” contracts and reimbursements with the state’s other plans, and officials would fight to lower its costs and would negotiate with pharmaceutical companies.

“We’re trying to do the right thing and find out how can we provide relief to families and businesses right now.”

“Clearly, the language that’s before the legislature today needs work. That’s not an uncommon thing in this building,” Lembo said. “We’re going to set rates accordingly. We’re going to do all the things that need to be done to make sure folks in the group are protected and confident they have what they need, and that the state is protected as well.”

The announcement Thursday was met with support from Democratic legislative leaders, Connecticut physicians, nonprofit health groups and small business owners, some of whom shared the plight of trying to secure health insurance for themselves and their employees.

But even staunch backers of the proposal have quietly acknowledged the plan has little chance of success this year. Lawmakers have only two months left to move bills through the General Assembly. Gov. Ned Lamont has repeatedly told reporters he doesn’t support a public option, and Republican leaders have taken issue with the bill.

“I have serious concerns, and the concerns really revolve around the issue of: If claims exceed the user fees paid in the new government-run program, how are the taxpayers protected?” Sen. Kevin Kelly of Stratford, a ranking Republican on the Insurance Committee, said.  “There isn’t oversight by the Department of Insurance, and there’s no stop loss.”

Sen. Matthew Lesser, D-Middletown, center, talks about the need for a public option.

Lamont, who last year supported the failed attempt to pass a public option bill, has since had a change of heart. He told reporters at an event in January that he no longer was in favor of a public option.

“I prefer working in a collaborative way with the insurers, with the health care providers,” he said. “A public option, a Connecticut option, none of these things matter if we’re not holding down the underlying cost of health care.”

The public option bill floated last year died after Lembo told The Hartford Courant’s editorial board that a threat by the head of Bloomfield-based Cigna Corp. had effectively killed the proposal. The measure was diluted to strip out the government-subsidized health plan, and it failed to pass the Senate in the waning hours of the session.

But some proponents said Thursday it was still important to put the concept back out there and try to rally support.

“We’re trying to do the right thing and find out how can we provide relief to families and businesses right now,” Lesser said. “We’re focused on coming up with the best possible bill. We look forward to doing that.”