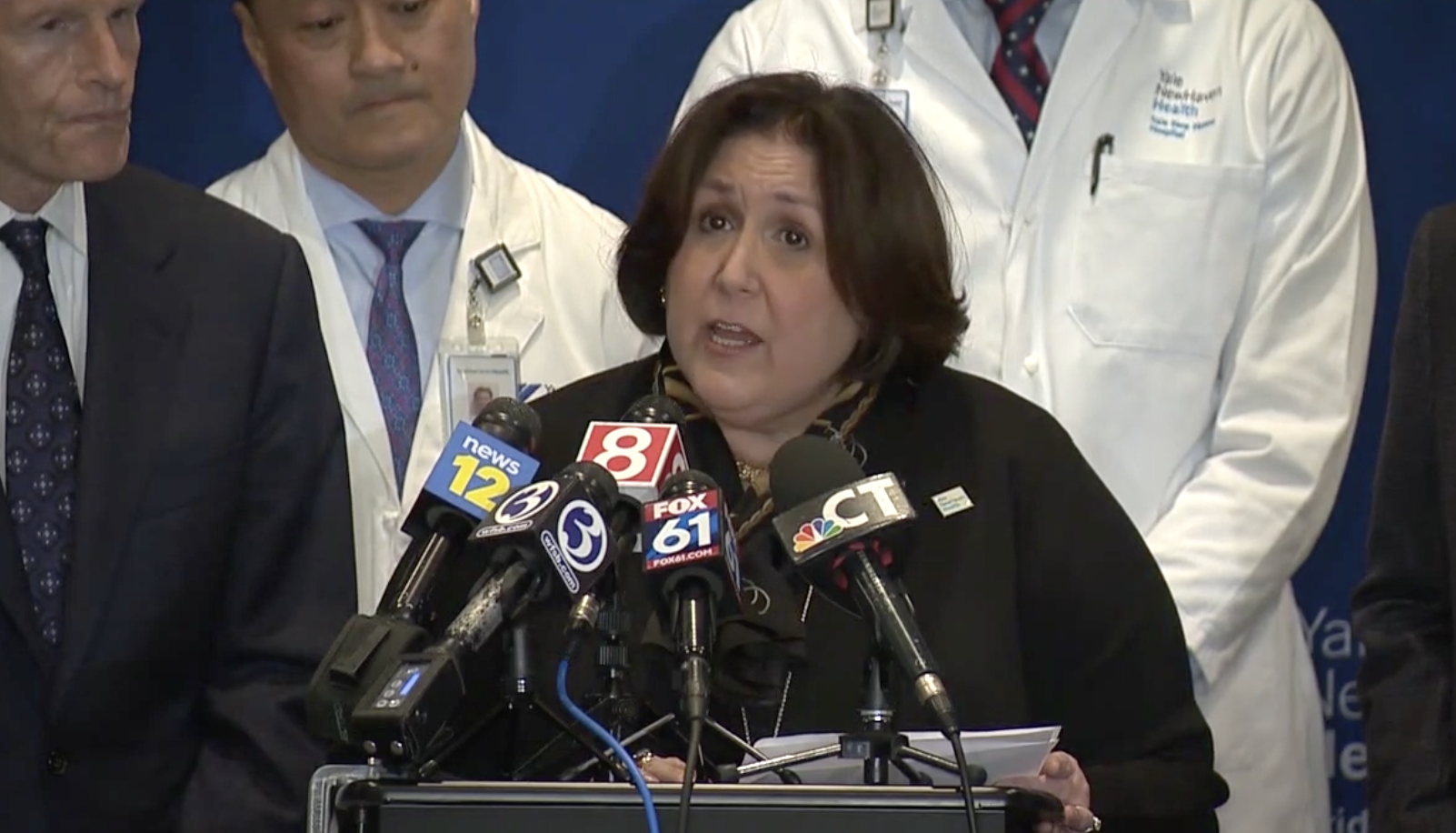 Bridgeport Hospital President Anne Diamond addressed the media Saturday afternoon. Diamond said the doctor who tested positive for coronavirus did not expose patients to the illness because he was exhibiting no symptoms when he made rounds at the hospital.

A doctor who works in Connecticut and recently made rounds at Bridgeport Hospital has tested positive for the coronavirus, the governor announced Saturday.

This is the second New York state resident who works in a Connecticut hospital to test positive for the virus, also known as COVID-19. State officials announced Friday night that an employee who works at both Danbury and Norwalk hospitals has tested positive for the coronavirus.

The doctor in Bridgeport did not shows symptoms of coronavirus while working with patients, the governor’s office said, and “stayed home to self monitor.” Officials said he was not an employee of the hospital, but rather a community doctor who made rounds there.

“This physician saw a limited number of patients at Bridgeport Hospital. At that time, the physician displayed no symptoms associated with COVID-19,” said Anne Diamond, president of the hospital. “As a result, the physician contact here during that time does not constitute an exposure.”

Hospital staff were notified and the “very small number of patients” who came into contact with the doctor were isolated, she said. The Centers for Disease Control and Prevention has since told them that isolation is not necessary.

“The CDC has advised us that our staff will not require isolation or furlough given the nature of the encounter, but we are asking that all staff self monitor for symptoms in the future,” Diamond said.

State officials did not release any details about the doctor, such as where he works or what type of medicine he practices. He made rounds at Bridgeport Hospital over the last weekend.

“This most recent case of another New York resident who works in Connecticut testing positive for COVID-19 shows us what we already know – coronavirus is here and viruses don’t stop at state borders,” Lamont said. The risk to staff and patients is low, he said.

Friday night, Lamont and other state officials announced that an employee who works at both Danbury and Norwalk hospitals and is a resident of Westchester County, N.Y. had tested positive for coronavirus.

The woman is quarantined at her home in New York. Health officials said she was in contact with “a limited number” of people and worked in “an isolated geographic area” in the two hospitals.

They did not provide details about her job or the number of patients she cared for, but a source with knowledge of the situation said the woman is a nurse who had been in contact with as many as 20 patients, as well as numerous colleagues across the two hospitals. The colleagues she came into contact with have been placed on furlough, and hospital patients who begin exhibiting symptoms of the coronavirus will receive priority for testing, the source said.

The woman was exposed to the virus in her home by another person who had tested positive for it. She then worked shifts at both hospitals.

“The hospital has been very aggressive – they’ve gone and they’ve figured out everybody that she’s had any contact with over the last several days and those folks have been put on furlough,” he said. “We’re monitoring them very carefully. Anybody, over the course of the 14 days, who shows any symptoms at all will be immediately tested.”

“We knew this day would happen. It’s here, so we’ll manage it.”

Renee Coleman-Mitchell, the state’s health commissioner, said Friday that Connecticut’s public health lab has tested 42 specimens for COVID-19, and all have been negative. Another 11 are in the process of being tested. The state has received one kit from the Centers for Disease Control and Prevention that allows health workers to test about 600 people. Lamont has requested additional kits.

Danbury and Norwalk hospitals are under “strict” surveillance, the governor said.

“It was somewhat inevitable that there was going to be a positive COVID-19 case in our state, and the first one happened to be an employee who works at our hospitals,” said Kerry Eaton, chief operating officer of Nuvance Health, whose network includes Norwalk and Danbury hospitals. “I have teams … who are currently working to make sure that we identify any and all persons who need to be notified of their potential exposure.”

“We believe it is contained because it was a very limited geographic area,” she added. The woman has been in quarantine since Wednesday.

The governor was joined Friday night by a slew of officials, including Lt. Gov. Susan Bysiewicz, Nuvance Health personnel, and local politicians, who seemed intent on delivering the same message: Connecticut residents should remain calm, stay informed, and follow federal guidelines for hand-washing and other safety protocol.

Hospital officials urged residents to remain calm so emergency rooms do not become overrun with the “walking well” – people who are not sick but are worried and want to be tested. For now, they said, testing is reserved for patients who are acutely ill and require hospitalization.

“If there’s a message for the community it’s: Look, we got this,” Danbury Mayor Mark Boughton said Friday. “It’s going to be unnerving. It’s disruptive. It’s scary. But at the end of the day, we’re going to be OK if we work together, follow the protocols that are in place, and communicate across all lines, including state borders.

“We knew this day would happen. It’s here, so we’ll manage it.”

State officials have launched a coronavirus information hotline. People with questions can call 211 or text “CTCOVID” to 898211.