'I knew ... this is going to be really hard for people to hear.' 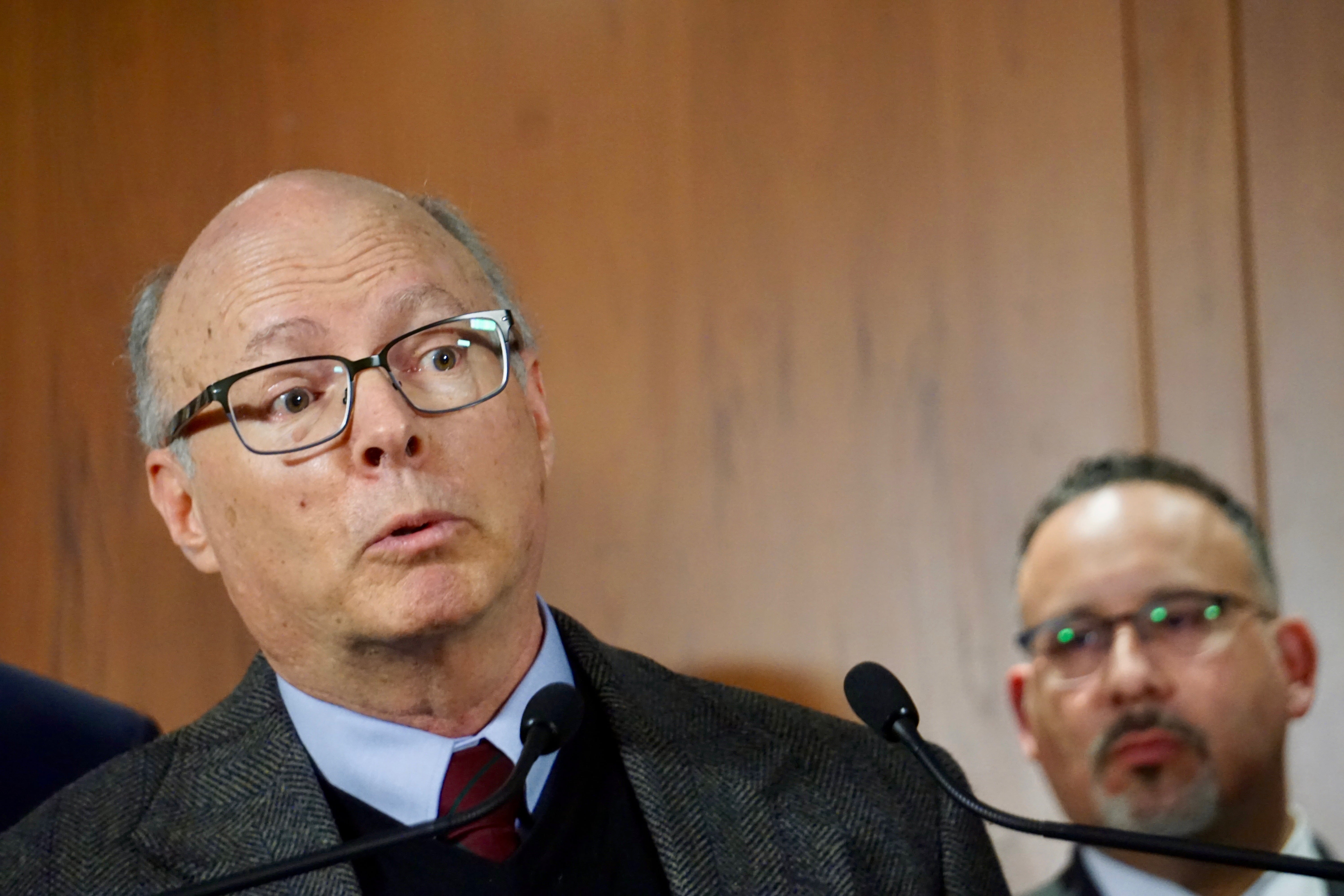 Dr. Matthew Cartter briefs the press and public. Watching is Miguel Cardona, the commissioner of education.

Dr. Matthew Cartter tells stories in a soothing voice, one seemingly calibrated to lull a restless child to slumber. But as the state epidemiologist, Cartter is the narrator of the fast-developing coronavirus story in Connecticut. His goal is make sure people are awake — and paying attention.

His private counsel contributed to Gov. Ned Lamont declaring a public health emergency on March 10, when only two residents had been diagnosed with COVID-19, the respiratory disease caused by a novel type of coronavirus.

The next day, Cartter bluntly informed the public during a televised briefing at the Emergency Operations Center in Hartford that COVID-19 was here, that an unknown number of people will die and the public-health focus was on slowing the disease, not containing it.

“It is only a matter of time before we have widespread community transmission,” Cartter said.

“The first one I got was from someone who wanted to know why I scared everyone,” Cartter said. “I knew that what I was saying, as I started, this is going to be really hard for people to hear. That was the story I needed to tell Wednesday: This is real.”

Four days later, there are more than two dozen confirmed cases in Connecticut, a number officials expect is artificially depressed by the lack of testing capacity.

All public schools are closed, and the Centers for Disease Control and Prevention issued guidelines Sunday recommending a prohibition of all gatherings of more than 50 people across the U.S. for the next eight weeks.

Dr. Anthony Fauci, the director of the National Institute of Allergy and Infectious Diseases, did not rule out a national order shutting restaurants and bars, as some mayors are requiring in their cities.

Connecticut should expect at least 10% percent of its residents to fall sick in coming months, he said, though Cartter and other public health officials say 80% will need no treatment, other than resting at home. But older people and those with chronic disease are vulnerable to pneumonia and other life-threatening complications.

Josh Geballe, who is coordinating the state’s inter-agency response as the governor’s chief operating officer, said he was grateful for the tone set publicly by Cartter and the blunt advice offered by him and others at the Department of Public Health. They raised an early and necessary alarm, he said.

“I think in Connecticut, this is an educated population and we would always wish to hear the views of the professionals, the experts,” Geballe said. “Most people I’ve spoken to appreciate that very much.”

Most people, perhaps. Not all.

Cartter said his estimate that between 10% and 20% of the state’s residents — 350,000 to 700,000 people – would be infected in coming months drew its own emailed criticism: “You must not be very good at math, because there is no way that many people can get sick in that short a period of time.”

The course of the disease in China, Italy and elsewhere say otherwise. Fauci, the 79-year-old federal public health official who is ever-present on cable, said all indications are that 70% of Americans will get the disease before the pandemic runs its course. The current wave is expected to last six to eight weeks.

Geballe said Cartter is Connecticut’s Fauci, and Cartter said Fauci is the standard in his profession.

“He is considered to be a master risk communicator. Risk communication is something that is taught at CDC, how you talk to the media, that kind of stuff,” Cartter said. “I think, ‘What is the story I need to tell?’ ”

On the cover of a CDC crisis communication hand book are three direct suggestions: “Be first. Be right. Be credible.”  It encourages public health experts to be transparent and not to shy away from reasonable speculation, as Cartter offered last week when asked to put the likely impact on Connecticut in concrete terms.

“These are the questions that everyone is thinking about, and to which they want expert answers,” the book says. “Although it’s often impractical to fuel ‘what ifs’ when the crisis is contained and not likely to affect large numbers of people, it is reasonable to answer ‘what ifs’ if the ‘what ifs’ could happen and people need to be emotionally prepared for them.’ ”

He teaches at Yale and UConn, and one of his interests is the history of epidemics, as was evidenced during a coronavirus briefing for lawmakers on March 6. Cartter told them everyone in the room had survived one influeza pandemic in 2009 and many a second one in 1968.

He also is director of the Connecticut Emerging Infections Program, a joint effort of the Connecticut Department of Public Health, the Yale Department of Epidemiology and Public Health, and the Centers for Disease Control and Prevention in Atlanta, Ga. The program is one of 11 sponsored nationally by the CDC that uses population-based surveillance to evaluate methods for the prevention and control of infectious diseases.

Cartter grew up in Cheshire and spent the 1971-72 year in Thailand as a high school exchange student, where he learned to speak Thai and considered becoming a doctor. He graduated from Wesleyan with a degree in biology, earned his medical degree at the University of Rochester and trained in internal medicine at Rhode Island Hospital.

Cartter started his career as a disease detective after completing his residency, joining the U.S. Public Health Service and serving in the epidemic intelligence service. He spent a year in Alaska at the Arctic Investigations Laboratory, then a year with the Department of Public Health in Connecticut.

“They asked me to stay on as a state employee for a year, then another,” he said. Cartter smiled and said, “It’s been 35.”

He started as a state employee in August 1985, a month before Rock Hudson died of AIDS, a disease that would challenge epidemiologists. He learned by watching Dr. James Hadler, the state epidemiologist who became his mentor.

“Jim was the only supervisor I had for 23 years,” Cartter said.

When Hadler retired in 2008 and turned to teaching, Cartter succeeded him, tracking contagious diseases and educating the public. West Nile Virus, Eastern Equine Encephalitis and SARS each presented their own professional challenges and provoked public fears.

In 2001, public health and national security became intertwined as letters containing anthrax were mailed to political and media figures. Connecticut disease detectives had to track how a 94-year-old widow who rarely left her house in Oxford had become the country’s fifth anthrax fatality. She appeared to be an unintended victim, her mail contaminated at a mail handling facility.

Ebola kept the infectious disease staff at the state DPH on the run in 2014, monitoring returning travelers. “It was like being on every day, all day for a year and a half,” Cartter said. “It was a trying time. We learned a lot. That was also the first declaration of a public health emergency in Connecticut.”

Cartter got a master’s degree from the University of Connecticut in 1996, taking night courses for six years. With others from the DPH, he teaches a course at Yale on outbreak investigations. The course began in January, about the same time as COVID-19 appeared in the U.S.

With Yale closed due to the pandemic, the course will continue online.