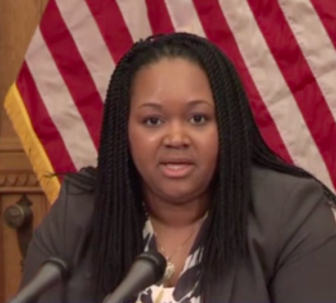 Melissa McCaw gives a first look at the fiscal impact of COVID-19.

The state is facing a $500 million budget deficit when the fiscal year ends June 30, Gov. Ned Lamont said Thursday, a shortfall that is directly attributable to the havoc being wrecked on state finances by the COVID-19 pandemic.

And if the coronavirus-related economic downturn is similar to what Connecticut experienced in the last recession, which ran from late 2007 through mid-2009, revenue losses alone next fiscal year could hover around $1.4 billion, said Lamont’s budget director, Office of Policy and Management Secretary Melissa McCaw.

Still, most of that red ink is due to income and sales tax erosion, created by delayed tax filings, a shuttered population and drastically reduced retail market. That all means the problems will certainly continue into the fiscal year that begins July 1, the governor added, and possibly beyond, depending in part on how long the national economy remains in recession.

“We were prepared for a lot in this state, but nobody’s prepared for the scale of what we have been confronted [with] over the last few months and we can expect in the next few months,” Lamont said during an afternoon briefing at the Capitol.

Lamont’s budget office had projected a General Fund deficit of just $60 million on March 20 — with the qualifier that COVID-19-related revenue and expenditure impacts hadn’t really been applied yet.

Comptroller Kevin P. Lembo praised the administration Wednesday when he upped the deficit to $170 million, but warned residents the red ink likely would grow erratically and excessively in the months to come.

“Obviously, this is the rainy day and we are well-positioned to weather this storm,” McCaw said. State Treasurer Shawn T. Wooden told the CT Mirror in mid-March that the state’s cash position was nearly twice as strong as it was entering the last recession more than 12 years ago.

To give residents some perspective about a problem that’s tearing through the economy at an unprecedented pace, Lamont noted Connecticut workers filed 180,000 unemployment benefit claims during all of last year.

There have been 220,000 filings in the past 18 days — a near 20-fold increase in pace, the governor said. The administration now estimates turnaround time for a jobless claim benefit is five weeks.

“Obviously we’re struggling to keep up,” he said, adding the Department of Labor continues to assign more staff to the problem. “I hope to be able to show you some progress soon.”

While state government anticipates receiving up to $1.45 billion in federal funds by the end of April, much of that is earmarked for unemployment, aid to hospitals and other care providers, and other health care benefits for the poor.

The Lamont administration already has broadened Connecticut’s safety net, increasing Medicaid services covered at this time, reopened enrollment periods, waived co-payments and allowed many individuals who normally would become ineligible over time to remain on the program.

About 70% of nursing home care provided in Connecticut is paid for by federal and state Medicaid funds. And McCaw said the state has increased payments to those homes serving Medicaid patients by 10% during the crisis.

She also said the state will pay “COVID-specific rates” to the homes that serve this population. The state announced the first stages of a plan this week to treat many nursing home patients with the coronavirus in a few specific nursing home facilities with multiple buildings so that infected and non-infected patients can be housed in separate quarters.

The state also is in the process of expanding homeless shelter services, has expended emergency energy assistance for the poor  and has maximized food stamp payments to recipients, she said.

And many private, nonprofit agencies, which provide the bulk of state-sponsored social services, are receiving full payments, regardless of whether they’ve been forced to curtail or eliminate services, McCaw said.

“Our response is very strong and we have the resources to support that,” she said.