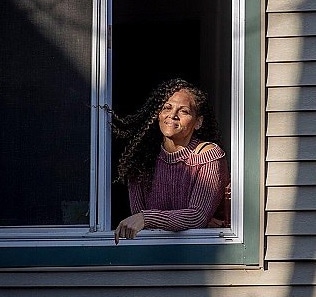 Natalie Kikkenborg at her home, in self-quarantine.

Natalie Kikkenborg is finally beginning to feel like herself again — nearly three weeks after the 36-year-old Westville fitness instructor and single mom’s temperature first shot up to 102 degrees, and over one week after she tested positive for Covid-19.

She wants people to see her and know about her experience, in part to dispel misconceptions about who is or isn’t at risk during the pandemic.

Her fever has subsided. Her splitting headaches have gone away. She has regained her sense of taste and smell. And she’s more sure than ever that the best way New Haveners can protect themselves and their community is by staying home to the greatest extent possible.

Kikkenborg is one of over 70 New Haveners so far who have tested positive for the infectious respiratory disease caused by the novel coronavirus.

Medical professionals, public health experts, and local political leaders have warned that the actual number of infected New Haveners is almost certainly much higher considering how relatively difficult it remains for most people to get tested.

According to the announced statistics last week, 41 percent of the confirmed cases in New Haven involve people like Kikkenborg — who are not seniors, but between 25 and 49 years old.

On Monday, Kikkenborg spoke with the Independent over the phone about the physical and emotional trial she has been through since she first developed coronavirus-related symptoms on March 11.

She also spoke about the outpouring of community support she received since her positive test results came back on March 21, following an initial medical misdiagnosis that she had the flu.

“My overarching feeling has been gratitude for so many things,” Kikkenborg said.

She is grateful for her body, which appears to be convalescing.

She is grateful for her friends and family and even strangers in the community, who have dropped off groceries at her front door and who have repeatedly checked in by phone and text and Facebook to see how she and her daughter are doing.

And she is grateful for the opportunity she now has to share her story with fellow New Haveners and to reinforce that this pandemic is not some distant abstraction affecting only Wuhan, China or New York City.

Covid-19 is here in New Haven. Anyone, no matter their age or background or physical health, can get it. And everyone must follow social distancing precautions to give themselves and their community the best chance possible to stay healthy and safe during this crisis.

“We’re going to flatten this curve a lot faster the more people accept we just have to stay home right now,” she said.

Kikkenborg recognized how difficult that can be for many. She herself is a single mother raising a fourth-grade daughter who is now home indefinitely as schools remain closed. As a professional Zumba instructor and singer, she has lost nearly all sources of income thanks to the broader economic shutdown precipitated by the social distancing precautions required to stem the spread of the disease.

“It’s terrifying, but it doesn’t mean that you’re above the rules and can take the chances and can be out and about,” she said.

She cited a friend’s recent Instagram post that encapsulated the message she most wants to share with the broader public as she continues to recover from Covid-19.

“I Don’t Remember Ever In My Life Feeling That Ill”

“I am 19 days post onset of my sickness,” Kikkenborg said Monday morning. “I am feeling pretty much like myself.”

Over two weeks ago, she said, that was very much not the case.

That’s when she went to an urgent care clinic in Hamden. A rapid flu test came back negative, but her doctor still prescribed her Tamiflu, which she took for the next five days.

Her temperature stayed at 102 degrees. She developed severe headaches that radiated throughout her entire head. She lost her sense of taste and smell. And she was so overcome by fatigue that she struggled to make the 10-foot trek from her bedroom to the bathroom.

“Just opening my eyes to focus, whether on my phone or a piece of paper, would send a shooting pain through my head,” she said. “By far the fever and the fatigue were definitely the most difficult symptoms. I don’t remember ever in my life feeling that ill.”

Her doctor recommended that she get tested for coronavirus, so she drove down to a drive-through testing station in Stratford.

“Pulling into the testing site was surreal,” she said. Like something out of a sci-fi movie.

All of the medical personnel were dressed in hazmat suits. The person who tested her stuck a swab up her nose and counted down from 10 from behind his mask and face shield. Within 48 hours of getting tested, she received word that she was positive for Covid-19. She has been in self-quarantine at home ever since.

In a public Facebook video she posted on Saturday commemorating one week since she found out she has coronavirus, Kikkenborg said that she has found some comfort in knowing that, by donating blood, she might be able to contribute to a potential cure for the disease as someone who has contracted it and is now recovering.

“There is so much guilt associated with that,” she said about the potential for infecting someone else. “But to know that you can save people at the other end helps me grapple with that guilt.” She said her daughter has not developed any coronavirus-related symptoms.

While she has been homebound, friends have dropped off groceries and added her and her daughter to their Instacart accounts. She said she recently spoke to a friend from her living room window; that physically present if distant social contact provided a much-appreciated balm for her recent isolation.

“Above All: Stay Home”

Asked what recommendations she has for people looking to support those who have developed coronavirus, Kikkenborg said, “Just letting them know that you’re there. It doesn’t take much. Just a simple, ‘Hey, if you need to talk, I’m here.’ Just well wishes are all it really takes.” She said the thought of trying to feed oneself is “furthest from your mind” when going through something like Covid-19, and so any grocery or take-out drop-offs are always appreciated too.

“And just keep your distance,” she continued. “Keep you health and safety” so that you can be a help to someone else in need.

“It’s so against human nature to be socially distant,” she said. “But that’s absolutely what we have to do.”

Kikkenborg is a staff singer at a church in Norwalk; two of that church’s members recently died from coronavirus. Kikkenborg said she has been open with her fourth-grade daughter about Kikkenborg’s own illness, as well as about the members of their church family who have recently died.

“I think it’s very easy to feel removed from it when it’s not in your immediate circle,” she said.

By far the fever and the fatigue were definitely the most difficult symptoms. I don’t remember ever in my life feeling that ill.

That’s partly why she went on Facebook and made that video about her diagnosis. “I wanted people to see my face” and to see that anyone, even a healthy professional fitness instructor in her mid-30s, can contract Covid-19.

Kikkenborg said she recently took her first Zumba class since falling ill several weeks ago. It was co-taught by an instructor in New Haven and another instructor in Costa Rica.

She said she intended on calling in and watching. She wound up dancing at home for 45 minutes.

“Within a few minutes, it felt like normal,” she said about the Zumba Zoom class. “It felt like my everyday class.”

She slept for six hours during the afternoon the day after the class, she said. Which is quite unusual for someone who usually teaches two to three classes a day, six days a week. But, she said, that’s only expected, as she is still recovering.

She said her plan right now is to isolate for at least a week after her symptoms have completely gone away, and then to get tested again. Since medical recommendations around the pandemic are changing so quickly, she said, she’s not sure when exactly she will be deemed medically all-cleared to end her quarantine and resume her life post-Covid.

“I know it’s hard, because we’re all going stir-crazy,” she said in her most recent Facebook video. But for now, the most compassionate thing that one can do—for oneself, for one’s family, for one’s community—is to follow the social distancing recommendations designed to “flatten the curve.”

“Stay healthy,” she said at the end of her video. “Stay with your families. And above all: Stay home.”

This story was first published March 30, 2020, by the New Haven Independent.

COVID testing in the cities? The messenger is as important as the message.

Polling shows African-Americans take COVID-19 seriously. But marketing widespread testing in the cities has been a challenge.