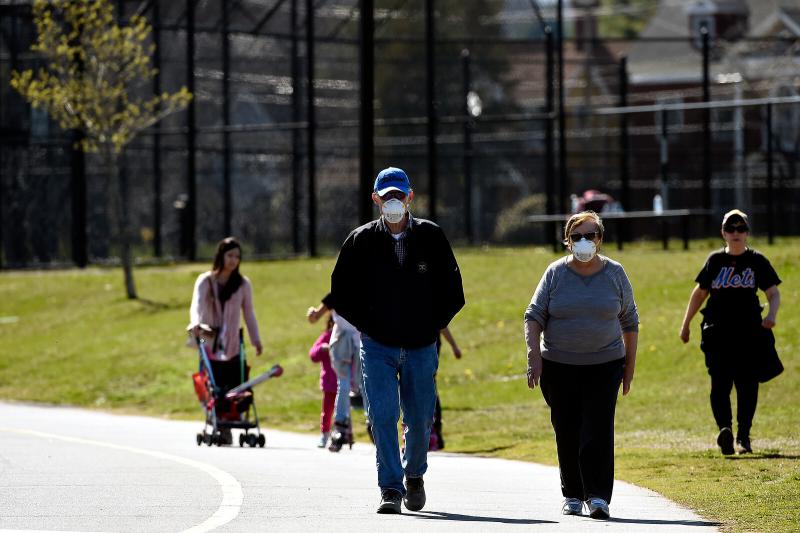 Exercise and social distancing at Walnut Hill Park in New Britain on April 06.

This story was updated on April 20.

The state reported an additional 41 coronavirus-related deaths Sunday, but it also reported that hospitalizations due to COVID-19 have decreased for the second day in a row.

The new figures bring the state’s total coronavirus-associated death count to 1,127. Still, Gov. Ned. Lamont said Sunday that the slight downward tick of hospitalized patients — 37 fewer patients from the day before — is a positive sign.

“Whether this continues is dependent upon…the actions each of us takes over the next several days and weeks,” Lamont said. “This isn’t over – we lost another 41 Connecticut residents, and we mourn for their lives. Together, we can have an impact on flattening the curve, but if people tell you the pandemic has ended – they are wrong.”

“Connecticut’s nursing home operators and their employees provide an incredible service to the people of our state, including for the 22,000 residents that receive direct care in nursing homes on a daily basis,” Lamont said in a statement. “I want to extend my profound gratitude to them, particularly during this unprecedented global pandemic that is having a particularly adverse impact on the elderly and individuals with disabilities residing in long-term care settings.”

Nursing homes can apply for reimbursement for employee wages, staff retention bonuses and overtime pay, PPE and cleaning supply purchases, and other COVID-19 related costs through the end of June, the state said. The association representing the nursing homes reacted favorably to the news — saying the resources are “badly and urgently needed.”

“It will principally, almost exclusively, address staffing shortages for frontline workers in Connecticut nursing facilities who are in an epic battle — really a historic, never-before-seen type of battle in Connecticut,” said Matt Barrett, president and CEO of the Connecticut Association of Health Care Facilities. “It is a scary time to be working in a nursing facility. Workers are exhausted and one would never fault some workers for showing trepidation about going to work.”

According to Barrett, Medicaid funds are dispersed from the Department of Social Services to each nursing home facility. Employee wages are set by each nursing home or by the collective bargaining contracts for unionized sites and each site is in charge of providing employees with PPE and sanitation supplies, which continue to run short.

Last week, the state began distributing pods of PPE supplies on a weekly basis to nursing homes, including masks, face shields, gowns, and gloves. A letter from the Lamont administration sent to CAHCF said that nursing homes will be required to adhere to an “enhanced level of reporting” for COVID-specific cost reports.

Lamont also announced that the state will be making physical, on-site visits to all of Connecticut’s 215 nursing homes and long-term care facilities over the next seven to ten days. The department’s Healthcare Quality and Safety Branch, with guidance from the Centers for Medicare and Medicaid Services, will conduct infection control surveys during each visit.

Health officials, economic experts and chiefs of staff from Connecticut, Massachusetts, Rhode Island, New York, New Jersey, Pennsylvania and Delaware will begin working together to develop a plan for reviving the economy and safely getting people back to work. That’s according to an announcement made Sunday by the various states.

“One thing that’s undeniable is that this virus does not stop at the border of any county, state or country, but the impact is the same when it comes to our respective economies and health care systems,” Lamont said Sunday. “Working as a regional coalition to make the right decisions will lead to the best public health results for all of our residents. We must solve these problems together.”

Representing Connecticut are Dr. Albert Ko, from the Yale School of Public Health; Indra Nooyi, co-chair of the nonprofit organization AdvanceCT and former chairperson and CEO of PepsiCo; and Paul Mounds, Lamont’s chief of staff.

According to the Lamont administration, the seven-state council is independent of the Reopen Connecticut Advisory Group, an assembly of health, business and education experts who will consult with the Lamont administration and the state’s legislative leaders on the reopening of the economy. Members of the advisory group are being appointed and will be announced in the coming days.

The weekend also brought good news for the region’s recreational boaters. Lamont, in conjunction with New York Gov. Andrew Cuomo and New Jersey Gov. Phil Murphy, announced that marinas, boatyards and marine manufacturers within the three states will be allowed to open for personal use “as long as strict social distancing and sanitization protocols are followed.”

According to the Lamont administration, chartered watercraft services or rentals will not be allowed, and related restaurant activity will remain limited to take-out or delivery.

“It’s really being able to take your family who you live with in the same household, to be able to go out into the best form of social distancing,” said Kathleen Burns, Executive Director of the Connecticut Marine Trades Association. “To be out on the water, and away from everybody else, so it’s really to that degree that we’ll see personal boat use.”

Burns said members of her organization have been instructed to refrain from “rafting up” with other boats — a process where boats link up on the water by casting anchors down and joining together above water using a rope or other mechanism.

“I think for everybody in their region to be able to go out, utilize their boat in their region, come back to their homes, do so safely, I think it’s going to be the best thing for all of us,” Burns said. “Even in a good year with no problems, at this time of year everybody wants to be out on their boat. But I think this year it’s for entirely different reasons, and that’s going to be able to get out, get away, enjoy the great outdoors, get some fresh air, bundle up and enjoy an early boating season when they can.”