Social distancing will be part of ‘new normal’ in Connecticut 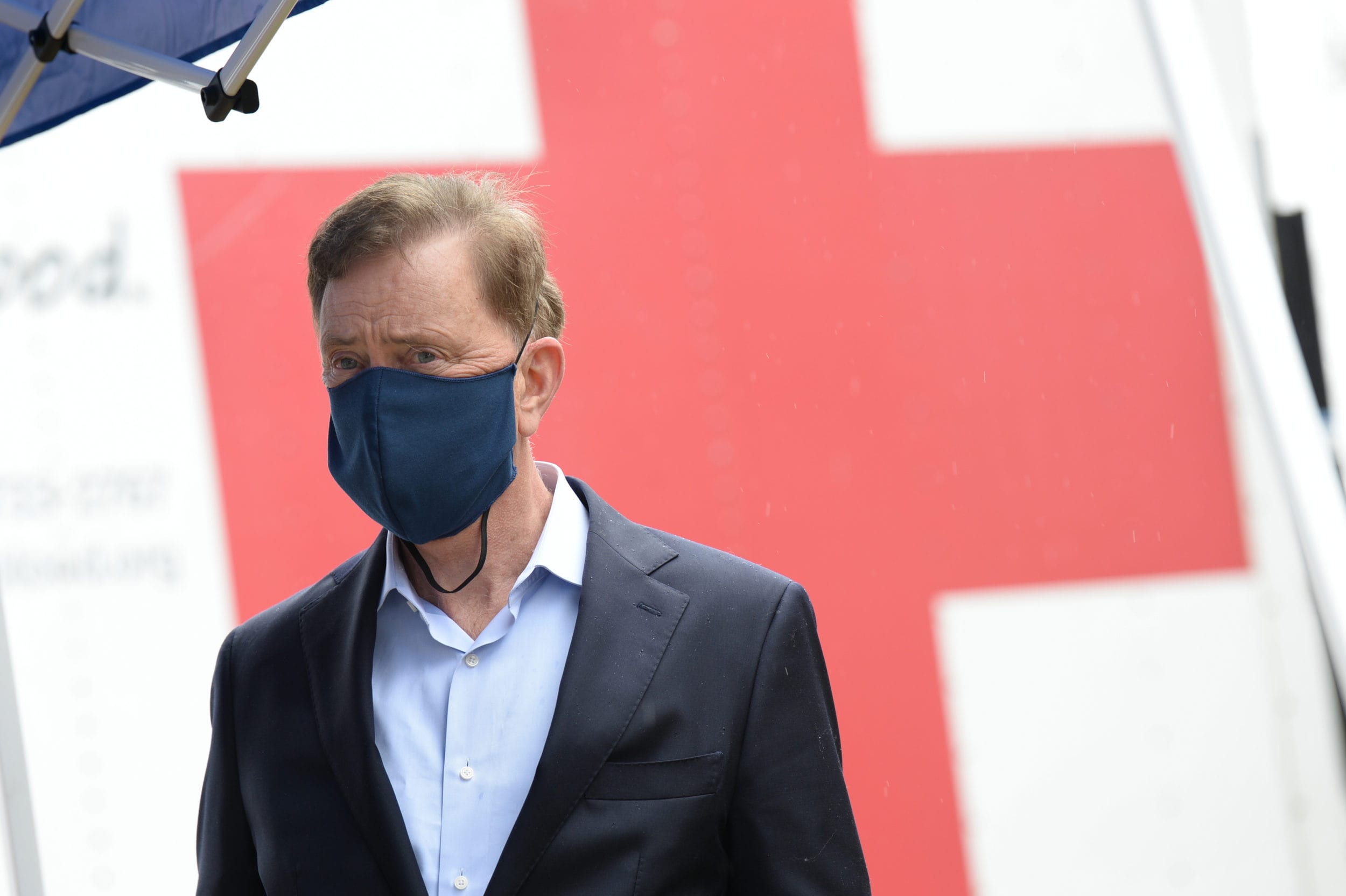 Gov. Ned Lamont listens as Sen. Richard Blumenthal (off camera) speaks at a press conference at a Red Cross blood drive at the Connecticut Police Academy in Meriden. Blumenthal and Lt. Gov. Susan Bysiewicz joined Lamont at the event. The purpose of their visit was to encourage residents who are healthy to donate blood.

Even as Connecticut studies how to begin easing COVID-19 restrictions, residents should expect some form of social distancing to remain a necessary public-health measure at least through the fall, the governor and the chief clinical officer of Hartford HealthCare warned in separate briefings Monday.

“It’s not the most popular thing to say at the moment,” said Dr. Ajay Kumar, whose system of hospitals had 357 COVID-19 patients, including 161 at Hartford Hospital. But he added, “That’s the only thing that’s going to keep the virus away from us.”

With overall COVID-19 hospitalizations falling for a fifth straight day, medical professionals and Gov. Ned Lamont are preparing Connecticut for what an easing of restrictions might mean, while warning against going too far too fast. Lamont’s current closure orders run through May 20.

“May 20th is a big date,” Lamont told reporters at a midday blood drive. “We’re going to have more testing by then, give us a better idea of what the infection rate looks like around different parts of the state. And we‘re going to have even more PPE.”

But the governor struck the same cautious tone as Kumar.

“I’m looking at Georgia. I’m looking at Oklahoma. I’m looking at those states where I think they opened up prematurely, especially those types of places where it’s impossible to socially distance,” Lamont said. “I keep that in mind as we figure what is the phased way that we can get our state back to work, but only if we do it in a safe way.”

Lamont said his Reopen Connecticut advisory group would issue an update Thursday, but he said the first restrictions to be eased likely would be aimed at small businesses where social distancing could be maintained. Connecticut, he said, will have to feel its way to “the new normal” as the pandemic subsides.

“As you move on into the summer, obviously with warmer weather, maybe you’ll find that restaurants’ outdoor eating is something that we find we can do relatively safely,” Lamont said at his daily late-afternoon briefing. “But perhaps an indoor crowded bar is something we can’t figure out how to do safely in the near term.”

The advisory group’s conference calls are not public, but Lamont said its leaders, Yale epidemiologist Albert Ko and former PepsiCo chief executive Indra Nooyi, will answer questions every Thursday at his daily briefings. He emphasized that the decision on when and what to reopen is his alone.

Lamont said he is not getting pressure from tourist attractions to reopen, but they are seeking “clarity.”

The state’s emphasis will be on returning as many people to work as soon as possible without endangering public health, said Josh Geballe, who is coordinating the state’s inter-agency response to the pandemic as the governor’s chief operating officer.

Lamont says he would like to see 14 days of declining hospitalizations and new cases. COVID-19 hospitalizations, which Lamont says is his key metric, totaled 1,758 on Monday, down 8 from Sunday and well within the capacity of the state’s hospitals. There were 728 new confirmed cases, bringing the total to 25,997.

The Centers for Disease Control and Prevention advise governors to maintain restrictions until their states show downward trajectories of new cases over 14 days, their hospitals can treat all patients without crisis care, and they have “a robust testing program for at-risk health care workers.”

“We’re about seven days into this down slope, and that means another seven to 10 days, I think we can start making some announcements about places we can go and places that can be opened,” Lamont said.

At Hartford Hospital, Kumar said the system can safely handle COVID and non-COVID patients, who are treated in separate areas.

“The volume is very manageable,” he said. 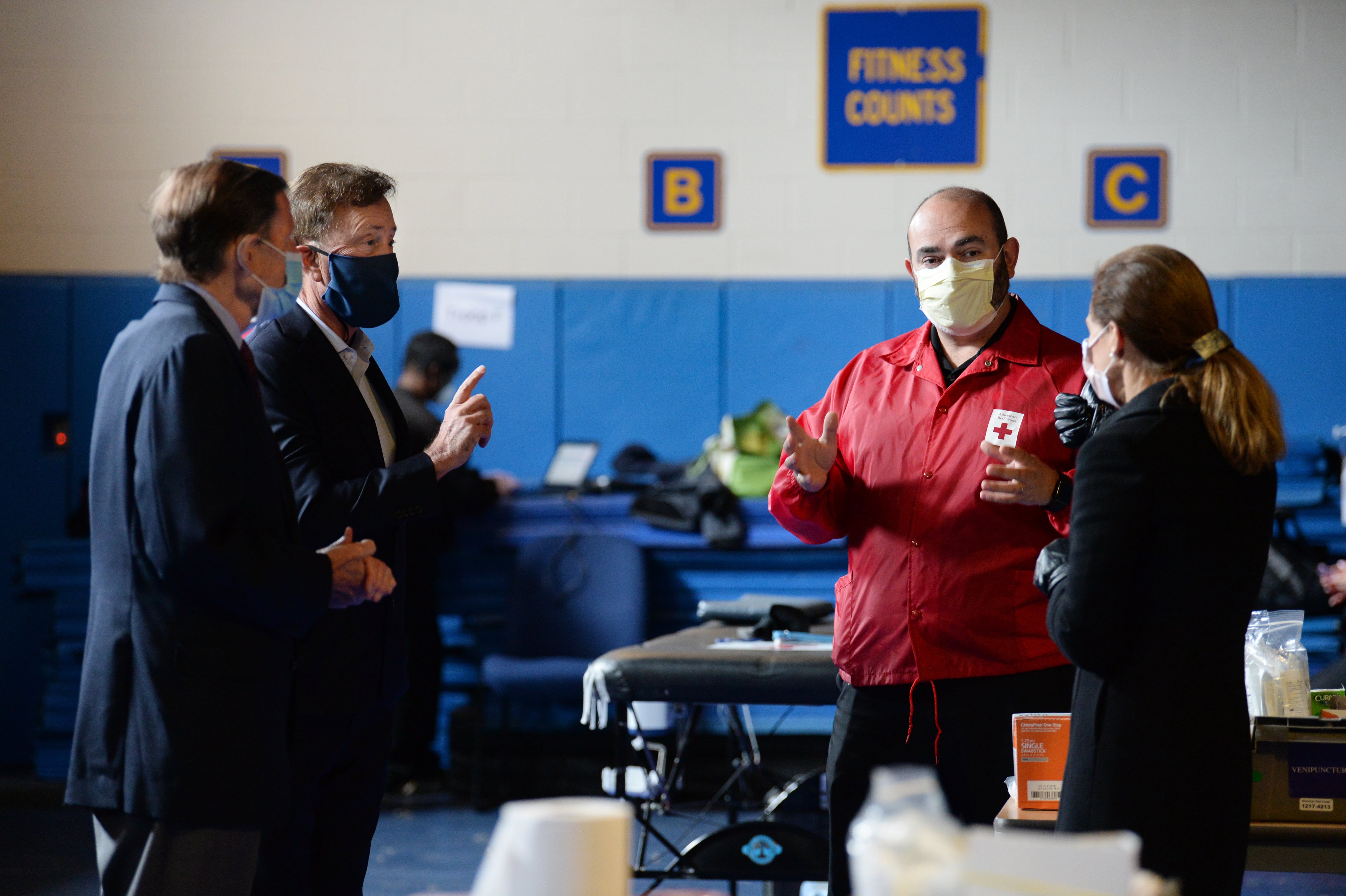 Gov. Ned Lamont (second from left) makes a point while talking with Mario Bruno, CEO of the Connecticut Chapter of the American Red Cross (second from right) at a Red Cross blood drive at the Connecticut Police Academy in Meriden. Sen. Richard Blumenthal (left) and Lt. Gov. Susan Bysiewicz (right) listen. The purpose of their visit was to encourage residents who are healthy to donate blood.

He joined Lt. Gov. Susan Bysiewicz and Sen. Richard Blumenthal at a blood drive at the Connecticut Police Academy. The American Red Cross has been able to meet blood needs during the pandemic, as elective surgeries were postponed and accident rates fell with much of the workforce under stay-at-home orders.

But the easing of restrictions will increase the need for blood, said Mario J. Bruno, the regional chief executive of the Red Cross in Connecticut and Rhode Island.

“We are ramping back up again, and we need each and every one of you to do your part,” Lamont said.

Bruno said the Red Cross is taking plasma donations from people who tested positive and then negative for COVID-19. The plasma is being used as an experimental treatment, and Kumar said in a video conference that Hartford HealthCare has had promising results with a limited group.

“Most are making good progress,” he said.

While urging caution, Hartford HealthCare also is looking ahead to when restrictions are eased. The hospital system already is thinking about how to treat post-traumatic stress in people who have had the disease or are fearful of getting it, said Patricia Rehmer, the president of the system’s Behavioral Health Network.

Lamont promised better protections for front-line workers, including those who staff grocery stores.

Blumenthal said OSHA needs to require better protections for them.

“OSHA is the key. OSHA has to issue an emergency temporary standards,” Blumenthal said.

He said he and other senators have urged OSHA to act.

Gifford said SNAP, the Supplemental Nutrition Assistance Program, will become more flexible and more generous in coming months. Benefits are to increase and the state is working on allowing the SNAP electronic benefit transfer cards to be used to purchase food online.

The state also is working with FEMA on a program to supply food to people who may be restricted to their homes, Gifford said.