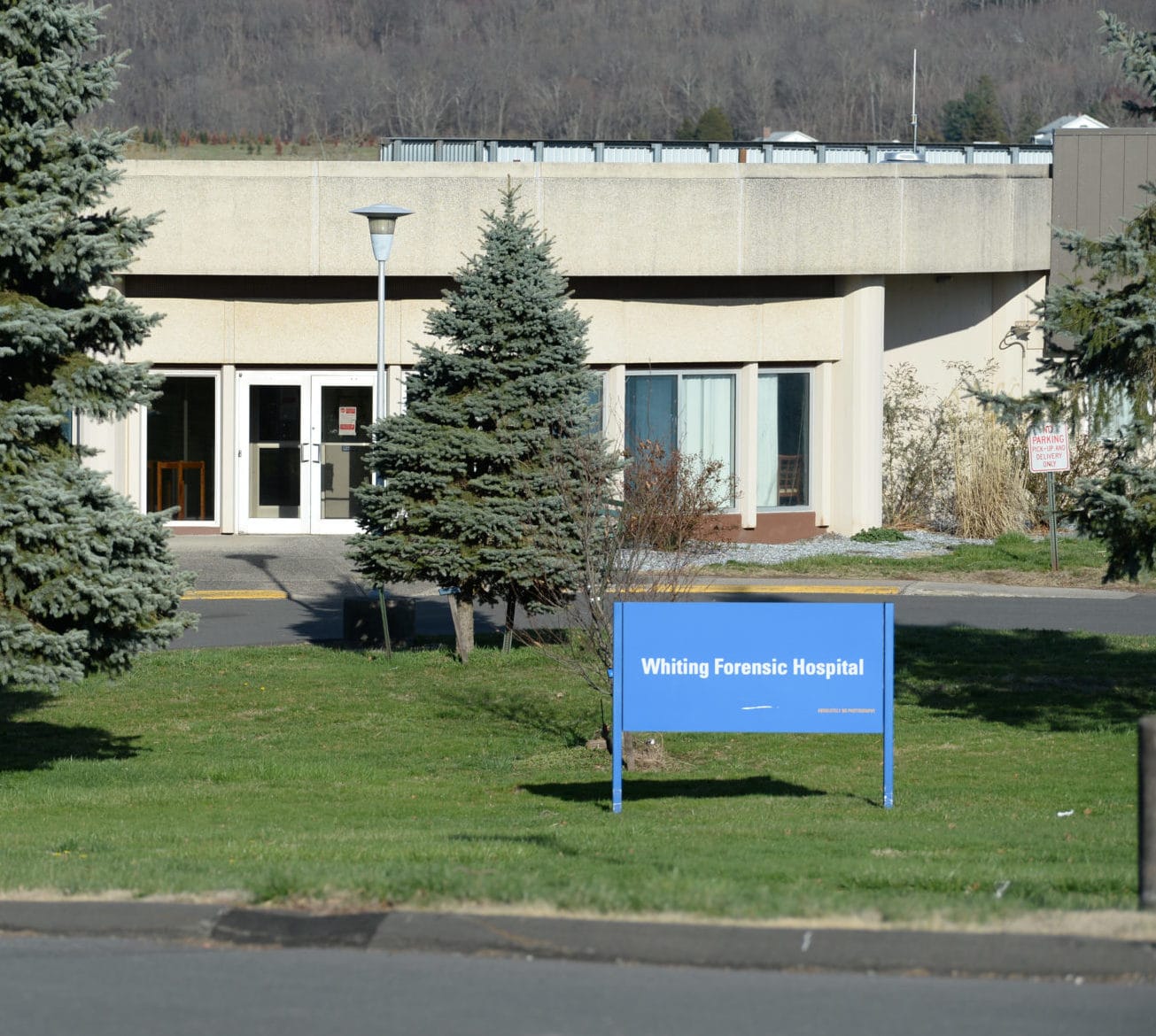 Exterior of Whiting Forensic Hospital on the grounds of Connecticut Valley Hospital in Middletown.

Connecticut Legal Rights Project, Inc. filed a federal lawsuit Thursday to force the state to release a “sufficient number” of inpatient psychiatric patients from Connecticut Valley and Whiting Forensic hospitals to protect them from COVID-19, and to create space so those remaining can practice social distancing.

The legal action comes on the same day the Department of Mental Health and Addiction Services announced the death of a CVH patient, the first person at a DMHAS-operated psychiatric hospital to succumb to the virus.

As of Thursday 41 CVH patients and 10 Whiting patients had contracted the virus. More than 50 staff at DMHAS facilities across the state — three-quarters of whom work at the two hospitals involved in CLRP’s lawsuit — have also tested positive for COVID-19.

CLRP’s lawsuit calls on the court to order the state to assess every patient at both hospitals, and release enough people to ensure those who remain can practice social distancing. It also asks Gov. Ned Lamont be required to issue an executive order suspending all commitments for civil and competency restoration patients, as well as transfers from the Department of Correction and those under the jurisdiction of the Psychiatric Security Review Board.

The suit would also require officials to order all necessary community supports and services and treatment be provided in the community.

“We are not asking for them to open the doors and let people walk out to nothing, with no supports, no services, no housing,” said Kathy Flaherty, CLRP’s executive director. “The risk of remaining on those units, where there is no chance for appropriate social distancing, is you basically are leaving people there to be sitting ducks to catch this virus.”

Among the plaintiffs are five patients from Whiting or CVH between the ages of 45 and 67. Several of them have underlying health conditions that put them at risk of serious illness or death if they contract the virus. Nine patients from CVH, and eight at Whiting have recovered from the virus, as have 22 staff members at facilities across the state.

Both hospitals have approximately 438 patients, all of whom, the suit alleges, “are similarly situated and in danger of infection, illness and death from Covid-19.”

Conditions described in the legal filing are not conducive to social distancing. CVH units are small and made up of television, comfort, sleeping, restraint and seclusion rooms, and rooms for staff. The majority of patients do not have their own rooms. Most sleep in open dormitory-style spaces with nothing but temporary walls that don’t reach the ceiling.

The filing makes special note of CVH’s Woodward Hall, which generally treats people age 50 or older who have significant medical needs. On April 29, the suit alleges, the last two elderly patients on one of Woodward’s units were transferred. The roughly dozen or so remaining patients on that unit tested positive for COVID-19 and were sent to Middlesex Hospital for respiratory treatment, or to a CVH quarantine unit.

“The whole point of it is you’re gathering in groups and doing therapy,” Flaherty said. “So, you’re either not providing treatment — in which case why are people being held there? — or, you are elevating the treatment and thereby elevating the chance of somebody contracting the virus.”

Flaherty worries about her clients because many people in inpatient psychiatric settings have underlying health conditions that put them at additional risk  should they contract the virus. They can be overweight because of their antipsychotic medications, or take medications with serious side effects like kidney failure.

In a letter sent to Gov. Ned Lamont and Attorney General William Tong on April 18, CLRP requested the state test all DMHAS patients and health care workers to make sure “no asymptomatic super-spreader” can infect and cause the death of staff or patients confined in state custody for treatment, against their will.

Other states have seen spikes in confirmed cases after testing residents who live in congregate settings. Officials in Pennsylvania and Ohio learned correctional facilities were viral hotspots after they tested large swaths of their prison populations.

Mary Kate Mason, DMHAS spokesperson, said in an interview before the lawsuit was filed that the department does not plan to test all of its patients to identify asymptomatic cases. “We are following the protocols that we’ve established and the CDC guidelines regarding testing,” she said.

CLRP also called on authorities to “make every effort” to discharge every patient who does not “absolutely need inpatient hospital level of care,” and discharge those who would not pose a risk to public safety and whose vulnerability to the virus outweighs the benefits of inpatient psychiatric care.

“We discharge our people when it’s clinically appropriate and when they have a place that can support them appropriately in their recovery,” Mason said before CLRP took legal action. “It’s business as usual.”

The DMHAS’ website says it has taken a number of steps to protect its staff and patents from the virus, including distributing personal protective equipment to all state-operated facilities, restricting visitors and temporarily reducing bed capacities in certain units across its system in order to maintain proper social distancing requirements. Flaherty said more must be done.

“I understand that they are dealing with a pandemic that nobody expected to have happen, but it is disconcerting, to say the very least, that there does not appear to be any creativity in terms of dealing with this,” Flaherty said. “They kept doing things they way they always do them, and now we have one person who has died.”