Housing instability is expected to rise. Schools are already on the front lines

Students step off a school bus in Norwich

As the homeless student liaison for Mobile County Public Schools, she and her team of seven social workers usually offer in-person support to the school district’s 4,000 homeless students. They’ve adapted to this moment, using Snapchat and Facebook to stay in touch with teens living on their own.

But she’s worried about the signs that more students will need their help soon, and the students who already need help may be growing tougher to find.

There’s been a recent surge in families “doubled up,” or staying with family, friends, or other acquaintances, Riemer said. And many families appear to have left the pay-by-the-week motels that line the county’s interstates, typically offering last-chance shelter for some students.

“A lot of our motels are very empty at this point,” Riemer said. “We are very concerned about, where do those people go? We’re trying to figure out a way to find them and reach out to them.”

The number of homeless students ballooned in the wake of the Great Recession, and continued to rise even after unemployment rates fell. The economic consequences of the coronavirus pandemic have appeared faster and are affecting a larger swath of American society, with unemployment claims hitting record highs.

How long the economic pain will last this time is unclear. But advocates worry the pandemic will lead to a rise in families experiencing homelessness or housing instability, especially when federal and state moratoriums on evictions lift. Already, many families are unprotected by these measures.

That would mean more students are entitled to help under the federal law that offers protections to homeless students. The challenge for schools will be making sure they get it, especially if school staff members aren’t seeing students in person.

“We know there’s going to be another wave of homelessness,” said Barbara Duffield, the executive director of SchoolHouse Connection, a national nonprofit that advocates on behalf of homeless young people. “The concern is always the family who was not homeless and is now becoming homeless, and do they even know they are, and who to contact?”

The federal McKinney-Vento Homeless Assistance Act guarantees certain services to students experiencing homelessness. The most common scenario for those students is living doubled up with multiple families or adults under the same roof due to economic hardship, but that classification includes students who are living in emergency shelters, motels, cars and campgrounds as well.

In recent weeks, civil rights groups and others have asked school districts to keep the unique needs of those students top of mind as they formulate their response.

For 18-year-old Angel Stouter-Workman, a senior at a high school in Frederick, Maryland, who experienced homelessness as a younger student and left her biological family four years ago, that means “just having a little bit more leniency for those students” and going the extra mile to make sure they have the devices and internet connection they need to learn.

She knows this struggle firsthand: She recently signed up for a promotion to get two months of free Wi-Fi, but couldn’t get the router to work. She’s been trying to do her schoolwork on her cell phone, but often finds “nothing will load.”

“My biggest concern is definitely how they don’t have access to be able to turn in all their assignments,” said Stouter-Workman, who is now a peer counselor and advocates on behalf of homeless young people in her community. “It’s not like it’s their fault. Outside of schoolwork, there are a lot more issues going on.”

In some cases, liaisons said, shelters or group homes for teens have closed due to the pandemic, scattering students to new schools. Many say they’re taking a regional approach, staying in touch with other districts and local social service agencies as families move around.

Food distribution has become a particularly crucial avenue for staying in touch with students. Already, a Brookings Institute researcher found, there is evidence “young children are experiencing food insecurity to an extent unprecedented in modern times” because of the pandemic.

In the Indianapolis area, a food drive last week offered a chance for James Taylor, the homeless student liaison for the Metropolitan School District of Warren Township, to take down information about families’ employment and housing situations. He hopes it will help him identify students who qualify for services, now or in the near future.

“What’s going on right now is a major concern, but what’s going to happen when things get back to normal is going to be a bigger concern,” he said, noting that many families are temporarily protected from eviction and have deferred utility bills. “It’s when things open up — that’s when we’re going to have to be more cognizant of getting people signed up.” 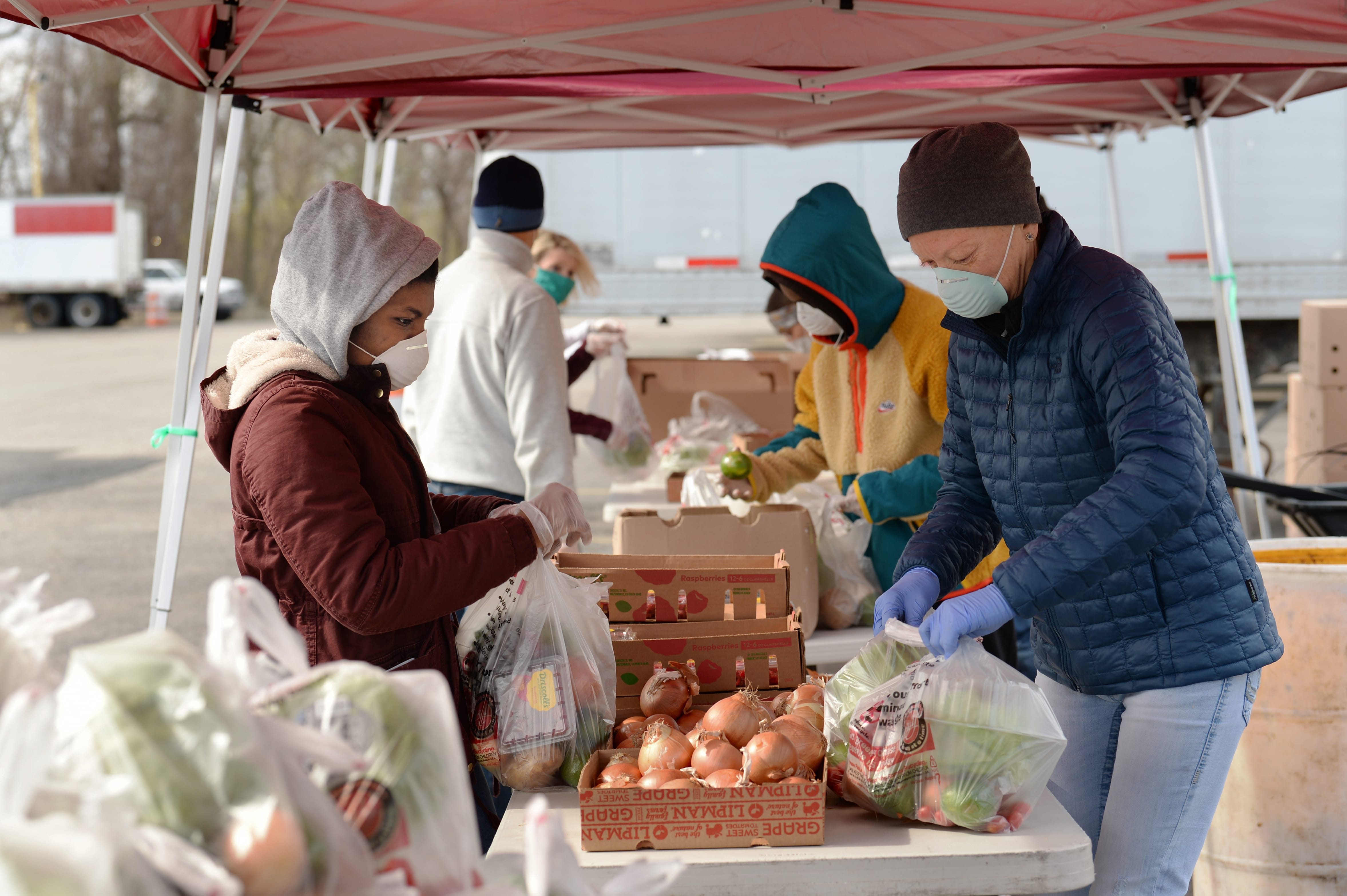 Volunteers package produce for pick up at Foodshare’s drive-through food pickup at the Hartford Regional Market. Foodshare distributes food here Monday, Wednesday and Friday from 8:30 a.m. to 11:30 a.m. to provide food to those in need during the COVID-19 pandemic.

Food distribution has also been a helpful check-in mechanism for Charie Gibson, the homeless student liaison in nearby Indianapolis Public Schools. She’s used a Google Form to find out if families in her district need food or other assistance, making sure to ask if they have a working stove or refrigerator.

“We can ensure that we pack a separate type of box for those families that don’t have those utilities,” Gibson said. “Those families are considered at risk of homelessness.”

Student attendance is another crucial way of keeping track of students who might need help — though that’s become more difficult to monitor in times of remote instruction.

Molly Cirrillo, the homeless student liaison for Hastings Public Schools, a small school district about 30 miles from Minneapolis, said she and the social workers she oversees have been reaching out to students who haven’t been engaged with their schoolwork, and in some cases making home visits. She’s also been encouraging school staff to take advantage of a new option that allows homeless students to stay on the district’s rolls even after they’ve been disengaged for 15 days, when normally they would be dropped.

“It doesn’t necessarily make them more accessible and easy to find,” she said, “it just helps that they don’t get lost and they’re not identified by any school district.”

Still, some liaisons worry about what will happen over the summer, when students will likely have access to fewer food distribution sites and less instruction.

“In the summer, which is always a really vulnerable time for kids, my concern is that we’d see people being lost, kids moving, and no one knows where they land until next fall,” said Wendy Kinnear, who helps coordinate services for homeless students in 10 counties in northwest Pennsylvania. “How are these kids going to be in a few months, and if there is still online instruction in the fall?”

This piece was originally published on Chalkbeat.