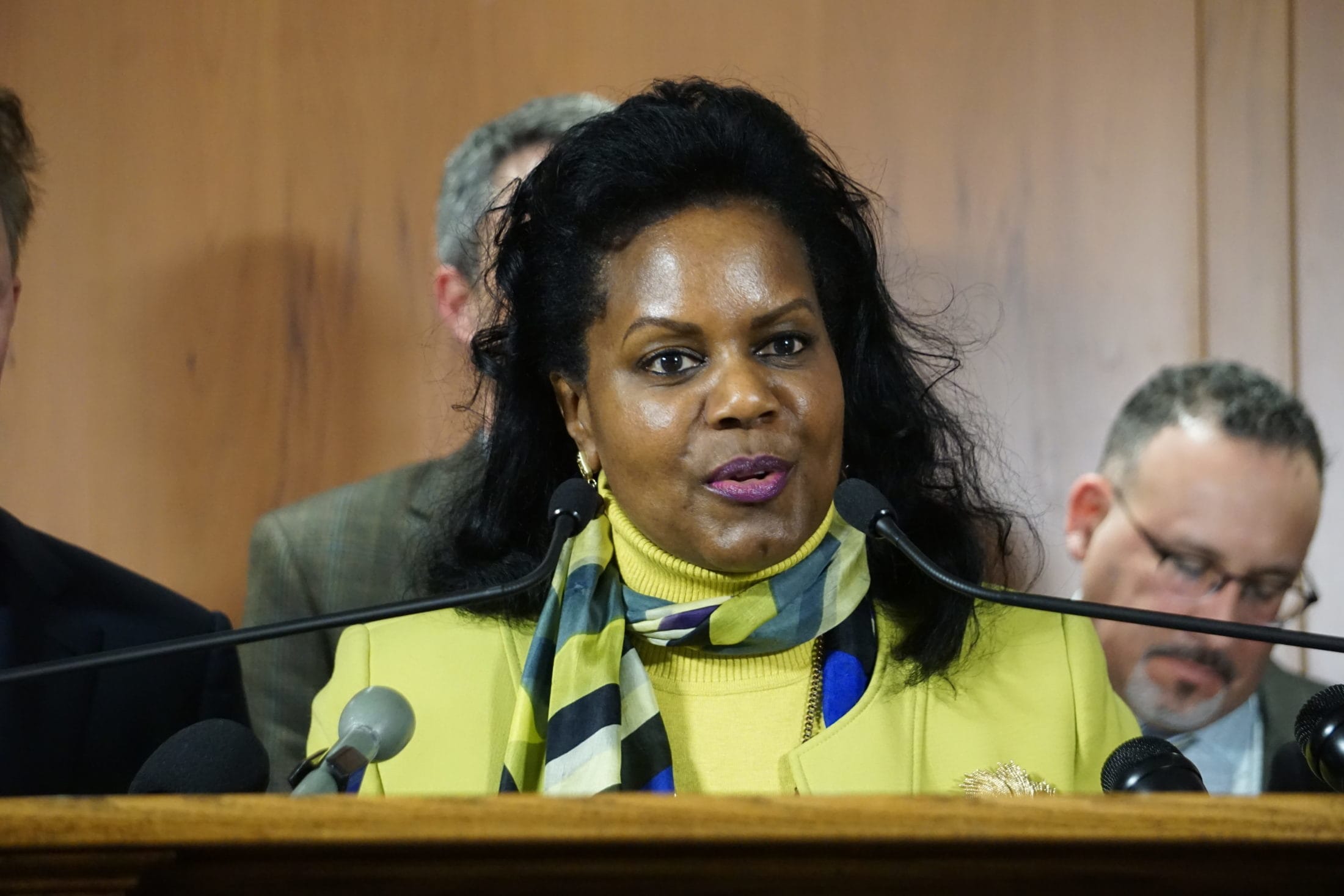 Renée Coleman-Mitchell at the news conference in March when the governor declared a public health emergency.

Gov. Ned Lamont has fired Renée Coleman-Mitchell as commissioner of the state Department of Public Health, a reflection of concerns that first arose last year during a school vaccination controversy and came to a head during the ongoing COVID-19 pandemic.

The governor’s office announced her abrupt exit in a press release Tuesday morning that offered no characterization of her departure, neither calling it a firing or a resignation. But sources said the departure was demanded, making her the first of Lamont’s top appointees to leave involuntarily in his 16 months in office.

Lamont later acknowledged at an unrelated late morning press conference that he fired his commissioner. He declined to give a detailed rationale, other than a desire for closer coordination among state agencies as Connecticut approaches the first phase of easing COVID-19 restrictions on retailers and some other businesses.

“I just had to make a decision,” Lamont said. “I thought this was a good time to make a change.”

The emailed announcement was awkward, leading with the news of Gifford’s appointment, not the departure of the state’s top public health official in the midst of a public health crisis. It offered no reason for the exit. The statement included quotes from Lamont and Gifford; none from Coleman-Mitchell.

In a statement issued through her lawyer Eric R. Brown Tuesday afternoon, Coleman-Mitchell said she was told the governor’s “decision to move the Department of Public Health in a different direction was not related to job performance. I take them at their word.” There was no mention in the statement of a lawsuit.

“I am proud of the work of the Department of Public Health during this time of unprecedented turmoil and threat to the public health. Our coordinated response to the COVID-19 public health crisis earned praise from public health experts around the country,” Coleman-Mitchell’s statement said. “I am most proud of my role in promoting and implementing creation of COVID recovery facilities, which will help make our retirement and elderly community populations safer and less susceptible to the indiscriminate suffering that the virus causes. Indeed, our plan was praised by David Grabowski, a professor of public health care policy at Harvard Medical School who told NBC News in an interview this week that it is “really the safest approach.”

Coleman-Mitchell’s department was under pressure to combat the rapid spread of the novel coronavirus at nursing homes, where more than half the 3,000 fatalities attributed to the disease in Connecticut have occurred. The administration eventually bolstered DPH inspection staff with National Guard personnel, and it recently began a program of testing all staff and residents for COVID-19 at all nursing homes.

“I appreciate Commissioner Coleman-Mitchell’s willingness to join my administration and lead one of our most vital state agencies, which is responsible for overseeing so many critical public health needs,” Lamont said in the emailed statement. “Her service over the last year has been a great deal of help, particularly in the face of the global COVID-19 pandemic that has brought disruption to many throughout the world. I thank her for her advocacy on behalf of the health and safety of our residents, and for being a dedicated partner in service to the State of Connecticut.”

Gifford, who has been coordinating the delivery of mass care, emergency assistance, housing and human services during the pandemic, promised no interruption in service at DPH.

“The ongoing COVID-19 pandemic has required every state agency to even more closely align with each other and sync our operations to deliver a coordinated response for the people of Connecticut. I am determined to continue these efforts for the duration of our emergency response and beyond,” she said.

“I’m glad they feel confident in the DSS commissioner. She’s great to fill the role. But doing DSS and public health in the middle of a global pandemic, that’s probably a tough job,” Ritter said. “So I’m sure they feel a sense of urgency, like all of us, to get a new public health commissioner.”

The pandemic has put the governor’s office in close daily contact with DPH, exposing it to morale and management problems at the agency. Most recently, Coleman-Mitchell and one of  her top appointees, Susan Roman, had a public falling out, and some in the governor’s office thought she mismanaged the issue.

Roman, whose duties included serving as the department’s liaison to the Emergency Operations Center during the pandemic, resigned as deputy commissioner on March 6. Roman wrote in a resignation letter first reported by the Hartford Courant, “Working for Commissioner Coleman-Mitchell has been an incredible disappointment for me.”

Coleman-Mitchell had an awkward first summer in the job over the issue of whether to end non-medical exemptions for child immunizations, sparking a controversy with the release of school-by-school immunization data, then shrinking from the ensuing public debate.

On May 3, 2019, the department published its first school-by-school assessments of child immunization rates, showing scores of schools with kindergarten immunization rates below the 95% threshold that the Centers for Disease Control and Prevention say is necessary to provide “herd immunity” for a community.

The commissioner, who has masters degree in public health degree from Yale University and 25 years of experience as a public health administrator, annoyed Democratic lawmakers by refusing for months after the data was published to offer a professional opinion on whether the exemptions posed a public health threat.

“I certainly think the unwillingness to offer her professional expertise on these issues is of concern,” Senate President Pro Tem Martin M. Looney, D-New Haven, said last year. “Prior commissioners have embraced their role as experts in offering information and guidance to the General Assembly, which is one of the things we expect of the public health commissioner.”

In August, Coleman-Mitchell expressed an unusual view of her job: “I am not able, nor should I weigh in on anything that’s public legislation that comes about as a result of any of the work we do. That’s not in the purview of my role.”

The same month, she said she would not release the latest school-by-school vaccinations rates.

“Given that we have not had any further measles cases since April and because the immunization rate for the measles, mumps, and rubella vaccines in Connecticut remains above 95 percent statewide, we will not be releasing immunization rates by school for the 2018-2019 school year at this time,” she said.

Coleman-Mitchell was publicly overruled a day later by the governor, who ordered the release of the school-by-school data. A month later, she joined the governor in a press conference in his office to unequivocally urge legislators to repeal Connecticut’s religious exemption from required vaccinations for children entering school.

She endorsed proposed legislation that would not force children to be immunized, but would bar unvaccinated children from enrolling in Connecticut’s public and private schools. Coleman-Mitchell and other state officials cited concern for children with compromised immune systems who cannot be vaccinated for medical reasons.

The commissioner stood with the governor at the Emergency Operations Center in Hartford on March 10, when Lamont declared a public health emergency. But she has rarely been featured since at his daily briefings on the pandemic.

Coleman-Mitchell was nominated for the post on February 22, returning to Connecticut after serving as executive director for Cougar Health Services at Washington State University. She previously worked for the Connecticut Department of Public Health for 14 years years before leaving as a section chief. She also is the former deputy health director of Hartford and the executive director of a health clinic in Meriden.

“Renée knows Connecticut’s public health community well and has the right experience and leadership skills to help achieve our goal of making our state even healthier,” Lamont said in announcing her appointment. “I look forward to having her on our team and am confident that, along with the capable staff at the agency, we will be ready to face these important challenges.”