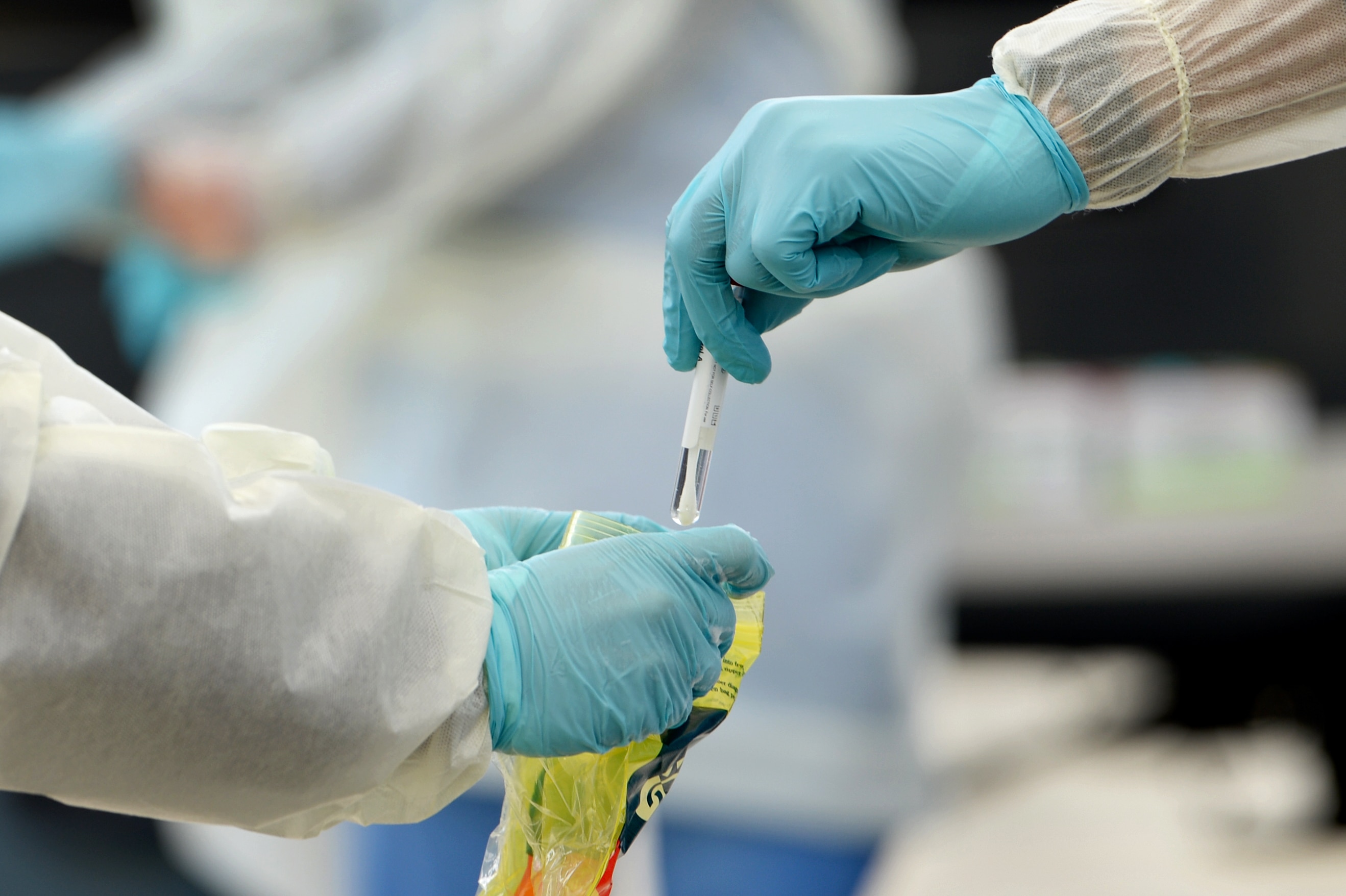 Connecticut officials are reporting a growing number of cases of a rare but potentially deadly COVID-19 related disease that causes severe inflammations in young children.

Yale New Haven Health officials said Wednesday they are treating two new cases of the mysterious illness, in addition to the three reported there earlier this week. In addition, at least two cases have been reported at the Connecticut Children’s Medical Center.

One of the young patients has now been released from Yale New Haven Hospital while the others “are doing quite well,” said Dr. Thomas Balcezak, chief clinical officer of the Yale New Haven health system.

New York state officials are now reportedly investigating about 100 possible cases of the new childhood disorder and there have been three child deaths in that state from the disease. Several other states around the U.S. have also reported possible cases.

Josh Geballe, Gov. Ned Lamont’s chief administrative officer, said the state Department of Public Health has now issued an alert “to all Connecticut pediatric health systems” to be on the look-out for new cases and to report any that are found.

“Now this is a trackable illness in the state of Connecticut,” Geballe said.

“These are young and healthy children with no underlying conditions,” Balcezak said of the Connecticut patients during an afternoon briefing. He said none of the five children at Yale New Haven showed signs of having the coronavirus before showing these extreme inflammatory symptoms.

Balcezak said four of the five children in question have tested positive for COVID-19 and that the fifth child is also suspected to have the virus.

Children who develop this new illness often have fevers, rashes on their back or legs, swollen and cracked lips, and swelling in their feet and hands, according to Balcezak. He said parents who see such symptoms in their children should immediately contact their doctors.

The first three Connecteicut cases of this new coronavirus-related syndrome were reported by state officials Monday.

State officials reported Wednesday that hospitalizations for the coronavirus are continuing to decrease across the state. The latest reports show the number of people in hospitals with the virus is down by 31 patients, to a total of 1,158. But COVID-19 fatalities rose by 84 Wednesday, bringing the overall pandemic death toll to 3,125.

The previous daily report on coronavirus deaths showed an increase of only 33 fatalities. Geballe said Wednesday that state officials don’t have any immediate explanation for the apparent one-day spike in COVID-19 deaths.

Despite the increase in virus-related deaths, Lamont was upbeat Wednesday about the prospects for reopening some portions of Connecticut’s economy on May 20.

“As long as the metrics continue on the trend they are, we’ll be able to do that,” the governor said of next week’s planned start up.

Outdoor versus indoor dining issues in a pandemic

The hopes and concerns surrounding next week’s re-start of restaurant dining were a main focus of the governor’s Wednesday briefing. Two Connecticut restaurant owners, one a Republican state senator and the other a Democratic state senator, said they are looking for a cautious and safe reopening with outdoor dining only.

Sen. Paul Formica, R-East Lyme, is the owner of Flanders Fish Market in East Lyme. He said his operation and the rest of the Connecticut restaurant industry is “ready for the challenge” of resuming business as the pandemic eases. But he also said outdoor dining won’t work as well for many restaurants as it will for his, and he urged Lamont to consider the possibility of permitting some indoor dining beginning June 3.

But Lamont expressed reservations about that suggestion.

“I’m going to err on the side of caution,” the governor said about allowing indoor dining. “You’re 90% more likely to catch an infection inside than outside.”

Sen. Christine Cohen, D-Guilford, owns Cohen’s Bagel Company in Madison. She said her business lost about 50% of its revenue after the start of the pandemic. Although she has been able to stay open by offering takeout and deliveries, the idea of outdoor dining presents a whole new challenge because the need to enforce rules on masks and social distancing. 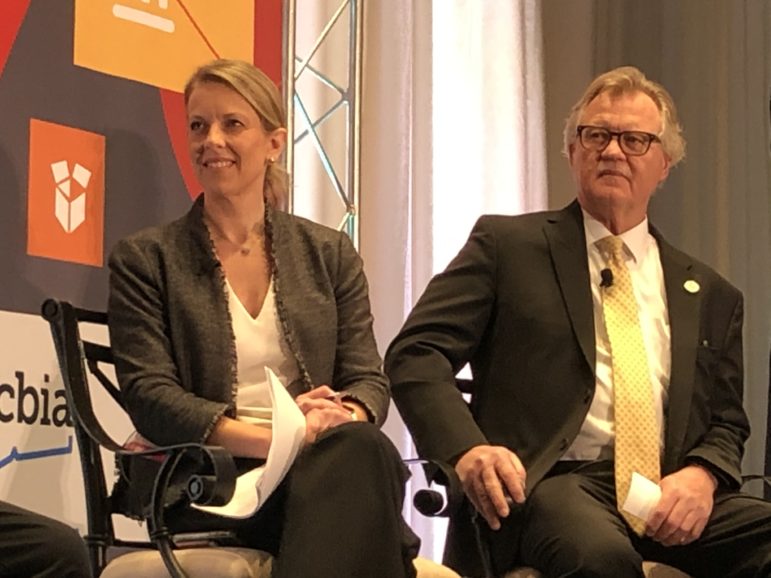 “How do we do business and police others?” she asked. Cohen said restaurant owners worry about whether they can refuse to serve customers who don’t follow protocols about wearing masks or social distancing.

Asked whether businesses would be liable if they reopen and customers come down with coronavirus, Lamont said the state will be issuing clear rules about cleaning and safety for staff and customers. “If you follow those, you wouldn’t be liable,” he said.

Lamont also said he is looking at June 20 as a possible date to start the next phase of reopening Connecticut’s economy, adding that a lot will depend on what happens after May 20.

The governor also defended issuing a $2 million no-bid contract to the Boston Consulting Group to help Connecticut plan and manage the reopening of its economy. Lamont said the nationally recognized firm is also helping other states in the region as well as Connecticut.

There has been some Republican criticism about the no-bid contract for pandemic-related work.

“I thought this was prudent,” the governor said of the no-bid award.

Going through the regular bidding process could have taken 60 days or longer, Lamont said, and he believes the state needed to move faster so “we can get going” on the economy.

Lamont also said the state’s costs for the contract will be reimbursed by the federal government.

The governor said Wednesday his first test for COVID-19 infection was negative.

“You’re stuck with me a while longer,” Lamont said during a morning interview on the WTIC Morning Show.

During his Tuesday briefing on the pandemic, the governor said he’d held off getting tested until this week because of the shortage of test kits and materials and because he wasn’t showing any symptoms of the virus. 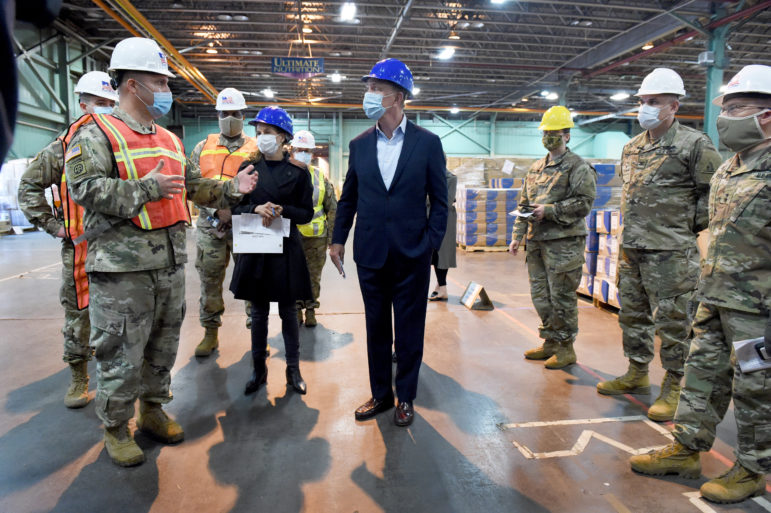 Gov. Ned Lamont (center) and Lt. Gov. Susan Bysiewicz (left, center) toured a New Britain warehouse this week to highlight a large shipment of personal protective equipment, or PPEs, that arrived over the weekend from China for health care workers on the front lines of the COVID-19 pandemic.

Lamont is urging residents to get tested now because Connecticut has far more testing capacity and is rapidly expanding its ability to check people for COVID-19. He said he decided to be tested because he wanted to “lead by example.”

State experts say it is becoming increasingly important to test larger sections of the population as Connecticut moves toward the start of reopening its economy on May 20.

“I am out there encouraging people to get tested right now,” Lamont said in the radio interview. “I don’t want to hear people say, ‘Not for me, I’m worried about the possibility of a quarantine.’ ”

Lamont said the state has dramatically increased testing, from about 18,000 tests a week at the beginning of May to 29,000 per week now. He said the state plans to run 42,000 tests next week.

The number of coronavirus patients across the Hartford HealthCare system is continuing to drop, officials reported Wednesday, and is now 30% to 40% below where it was just 10 days ago.

“We are seeing a significant decline across Hartford HealthCare acute care,” Dr. Ajay Kumar, chief clinical officer for the system, said during a Wednesday morning briefing.

The total number of COVID-19 patients across the Hartford HealthCare system now totals 232. The largest number of those patients, 97, are currently at Hartford Hospital. Saint Vincent’s Medical Center in Bridgeport has 68 patients being treated for the virus, and the Hospital of Central Connecticut in New Britain has 31.

Kumar said he believes Connecticut’s cautious plan for beginning to reopen the economy next week is the correct approach.  But he said he is “very concerned” about coronavirus surges in other states that are reopening their economies without closely following CDC guidelines.

The number of cases in that system has declined from more than 600 a week ago to 487 on Wednesday, said Marna Borgstrom, the system’s CEO.

Borgstrom called the steady decline “a little good news” but added that Connecticut needs to proceed slowly as it reopens its economy.

The state Department of Education announced Wednesday the federal government has approved its application for $111 million in federal stimulus money through the CARES Act. The money was set aside for K-12 education in Connecticut.

The bulk of the funding — $100 million — will go to local districts to spend on anything from purchasing laptops for students to learn remotely to closing budget gaps created by the pandemic.

Concern among some educators has been growing that officials may reduce town funding for education because school districts have received increased federal funding. There is also concern that districts are saving considerably with school being closed, rather than spending the budget on remote learning. After reading that some school districts are reporting budget surpluses and are returning funding to the municipality, State Education Commissioner Miguel Cardona wrote all superintendents last week.

“With the recent headlines around local districts having educational budgetary surpluses, we felt compelled to communicate our belief as educators that in no way does any district have ‘surpluses’ during this pandemic if they have not exhausted those resources to support all of their students’ needs,” he wrote. “Additional federal stimulus funds will be available to support local municipal needs and I encourage educational leaders, as partners in the process, to scrutinize opportunities for the most effective engagement tools to reach our students and educate them.”

It is unclear if Lamont will step in and restrict towns from cutting their contributions to the schools.