Lamont says state is meeting metrics for May 20 reopening 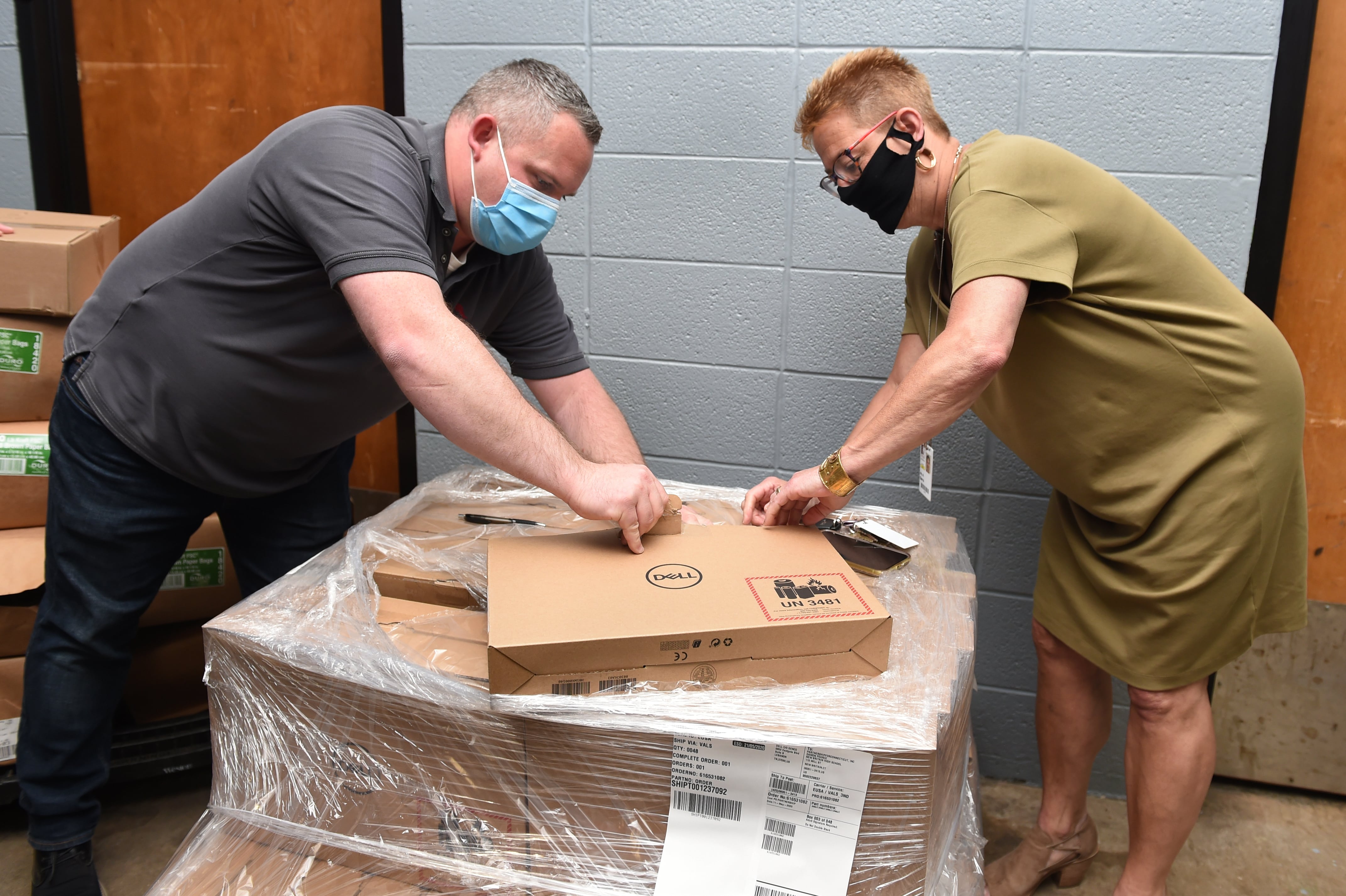 Robert Smedley, (left) Supervisor of Services and Facilities at New Britain High School, and Superintendent of Schools Nancy Sarra (right) unpack a delivery of Dell laptops to the school Monday. The school is receiving 2,400 new laptops to distribute to all students to use for distance learning during the COVID-19 pandemic. The laptops are a philanthropic gift of the Partnership for Connecticut, which formed last year as a joint project between the state and Dalio Philanthropies to benefit students in underserved communities. “It’s like Christmas in May and I’m thrilled!” said Sarra.

Gov. Ned Lamont said Monday that Connecticut is on pace to meet the criteria it set for a safe, partial reopening of business this week, citing a continued decline in hospitalizations and an increase in testing.

Coronavirus-related hospitalizations in the state have been on the decline for about four weeks now.  On Monday that number dropped by 17 to a total of 920 people, officials said.  An additional 41 people died from complications related to COVID-19, bringing the total number of COVID-associated deaths to 3,449.

The governor said the goal of increasing COVID-19 testing to 42,000 tests per week was also proceeding on pace, with the state reporting slightly fewer than 45,000 coronavirus tests performed in Connecticut over the last seven days.

The state has said it’s working to boost its testing numbers in recent days, prioritizing testing at prisons, nursing homes, and other high-risk areas like densely-populated city centers.

Hospitals have also increased testing for medical professionals and other frontline caregivers.

But Deidre Gifford, the acting commissioner of the state Department of Public Health, said one frontline group that will not be tested in the first wave of expansion for COVID-19 testing is daycare workers.

“We have not seen large numbers of cases in daycare centers of COVID,” Gifford said. “They do report to DPH and it’s been a very, very small number of cases that we have seen.”

“In our first phase of high-priority testing, daycare workers are not specifically called out,” Gifford said. “But as we … continue to add to our testing capacity and our testing strategy, all types of frontline workers, we will begin to develop guidance and recommendations.”

A group of New Haven Clergy are urging churches to remain closed until certain criteria is met.

“There’s much more work that needs to be done,” said Reverend Dr. Boise Kimber, of the Greater New Haven Clergy Association, during a call Monday morning. “This is not the time.”

Kimber said reopening New Haven churches will depend on a number of factors, including a steady decline in COVID-19 cases and making sure every church has adequate supplies of personal protective equipment.

The issue of testing was also raised. Kimber said he was concerned people who need to be tested for COVID-19 due not have access to the test, especially in the city’s predominantly black and latino neighborhoods. Kimber said New Haven Mayor Justin Elicker and Governor Ned Lamont should consider opening testing sites at some of the churches in those neighborhoods. 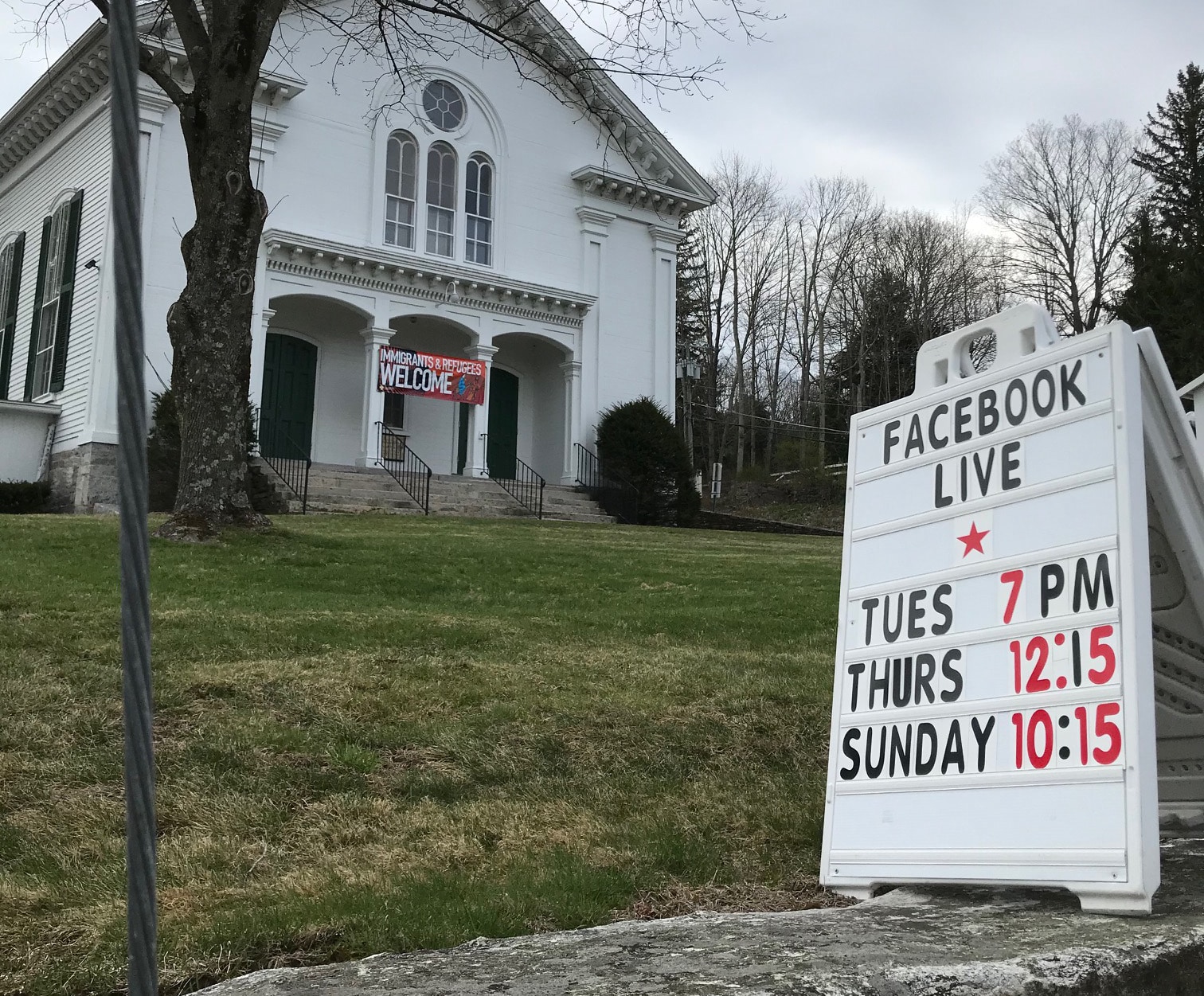 Churches all over Connecticut, like this one in Mansfield Center, took their worship services online during the height of the pandemic.

“You got Newhallville, you got West Hills, you got West Rock. Those places … are practically 60% or more, minorities,” Kimber said. “You’re asking poor people who don’t have health care, who gotta catch a bus in order to get to some of these sites.”

New Haven officials have said taxi services to and from the city’s COVID-19 testing sites are available free of charge to residents who call 2-1-1 and make an appointment.

Coronavirus testing is also free, regardless of your insurance status, and residents without Internet access may get help scheduling an appointment by calling the New Haven Health Department at (203) 946-4949, according to the mayor’s office.

Kimber said churches in his association are suffering financially. He predicted some may have to close permanently without city, state or federal support.

Catholic churches across the state are also considering their plans for reconvening public gatherings at mass.

The Archdiocese of Hartford said Monday it has not yet reached a decision on when public mass celebrations will resume, but that Archbishop Leonard Blair has convened a group of five pastors to work on that decision and “and how we can safely resume the public celebration of Mass in a way that minimizes risk for all involved,” said David Elliott, a spokesperson for the archdiocese.

“We are hopeful that these determinations will be finalized by Archbishop Blair this week, but given the complexity of the situation, it could very well be next week.”

The Diocese of Bridgeport said in a statement on its website that it will begin the outdoor public celebration of mass beginning May 21.

A spokesperson for the Diocese of Norwich said Monday afternoon that a decision on resuming public masses there has not yet been made.

Bridgeport working to get outdoor dining operational this week

Bridgeport Mayor Joe Ganim said Monday city workers continue to streamline the process for restaurants to get outdoor dining up and running by Wednesday.

The city will allow for parking lots and sidewalks to be used to house tables. He encouraged the public to report any business not following state guidelines.

“If you see a business not following that please let us know about it.  We are not going to send a swat team in but we will put them on point.  People have got to be on point.  You have got to step up and do the right thing here,” Ganim said.