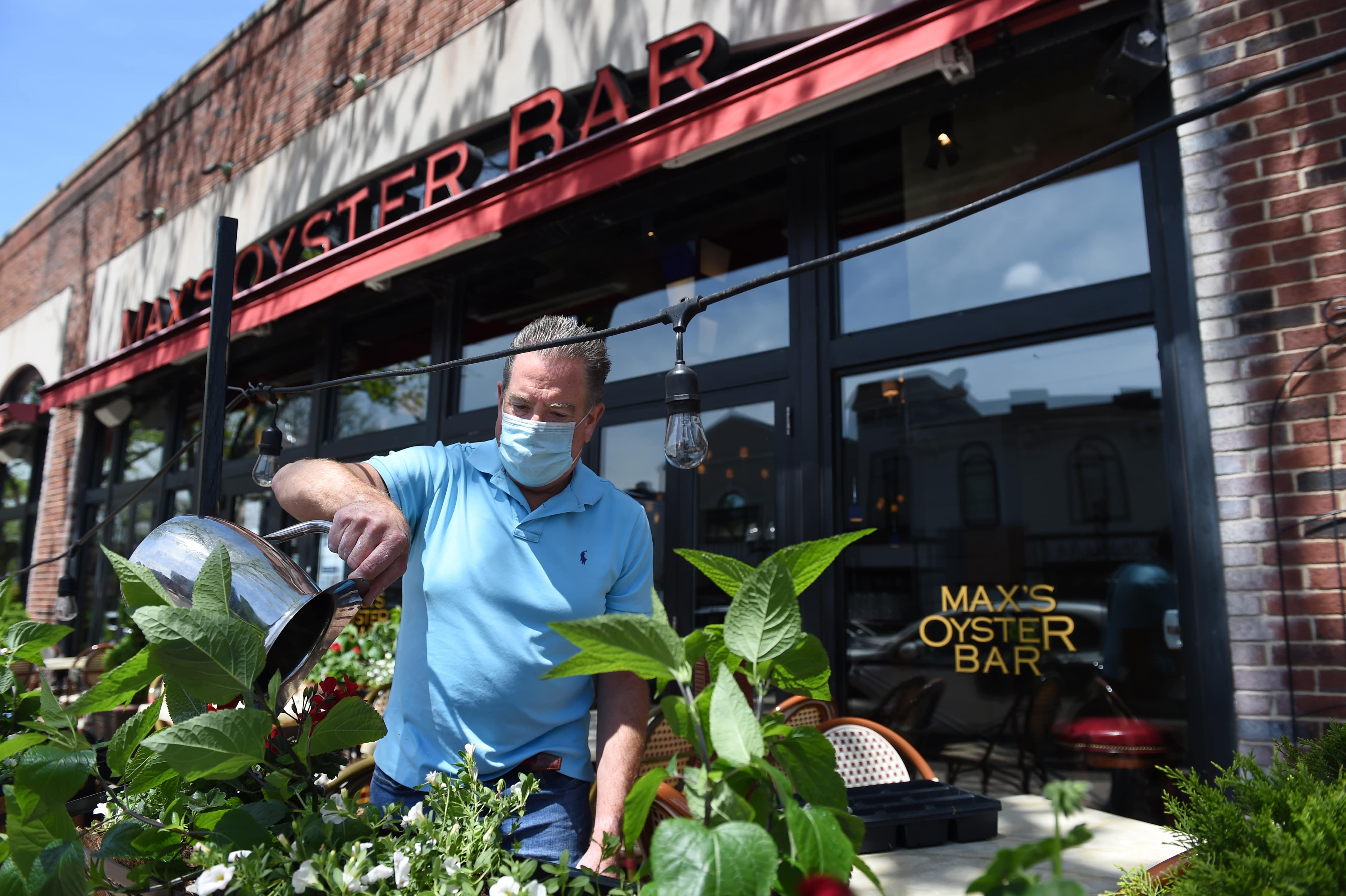 Bob Cooke, a partner and co-owner of the Max Restaurant Group, waters planters surrounding the patio at Max’s Oyster Bar in West Hartford. It will reopen for  outdoor dining on Wednesday.

It’s going to be a soft opening in Connecticut on Wednesday.

Only one in four restaurants are expected to take advantage of the first easing of the COVID-19 restrictions: They can seat diners for the first time since March, but only outdoors — where the risk of infection is lowest. All retailers can open, but a regional mall expects foot traffic to be off by as much as 70%.

“We don’t anticipate capacity being an issue initially based on consumer trends in other markets that have reopened,” said Amanda Sirica, the spokeswoman for Westfarms, the 1.2 million square-foot mall that straddles West Hartford and Farmington.

Restaurateurs say the extent of outdoor dining at some restaurants will depend on the availability of outdoor furniture and tents and the ability of municipalities to quickly review plans for converting portions of roads, sidewalks and other public thoroughfares into sidewalk cafes.

The reopening is bittersweet for a restaurant industry that lobbied Gov Ned Lamont to also permit limited indoor seating in the first phase of the reopening, saying too many restaurants either had no outdoor space or too little to profitably operate. The industry is now pushing for June 3.

No one sitting in the bar. No one in the building who doesn’t have their butt in a seat. The idea we couldn’t control that environment and make it as safe as a Saturday afternoon at a big box store or the mall, we have a hard time with that.” — Dan Meiser, Mystic restaurant owner

Dan Meiser, a restaurant owner who served on the public-private group that advised Lamont on the four-phase reopening plan, said he understood Lamont’s struggle to balance public health and the need to resume business. But the industry can safely offer indoor dining by limiting capacity and keeping restaurant bars closed, he said

“No one sitting in the bar. No one in the building who doesn’t have their butt in a seat. The idea we couldn’t control that environment and make it as safe as a Saturday afternoon at a big box store or the mall, we have a hard time with that,” Meiser said.

His restaurants — Oyster Club, Engine Room and Grass & Bone — are located in Mystic, a shoreline community in southeast Connecticut where the hospitality industry is a major employer and unemployment is estimated as high as 30%. The region’s employers include the two tribal casinos, Foxwoods Resort Casino and Mohegan Sun.

Both casinos closed at the governor’s urging on March 17, but the tribes reserve the right as sovereigns to reopen when they believe they can safely do so, not when permitted by the governor.

Dr. Ezekiel Emanuel, a bioethicist who also served on the advisory group, took pains at the governor’s daily briefing Tuesday to say the casinos should remain closed, saying they attract a significant number of older, at-risk patrons.

Meiser argued the restaurants could fit into that framework.

“It’s not fun to talk about it,” Meiser said. “It’s a very delicate topic. No one wants to be perceived as pushing too hard and disregarding the real tragedy that is going on.”

Restaurant owners say they are uncertain what to expect Wednesday. 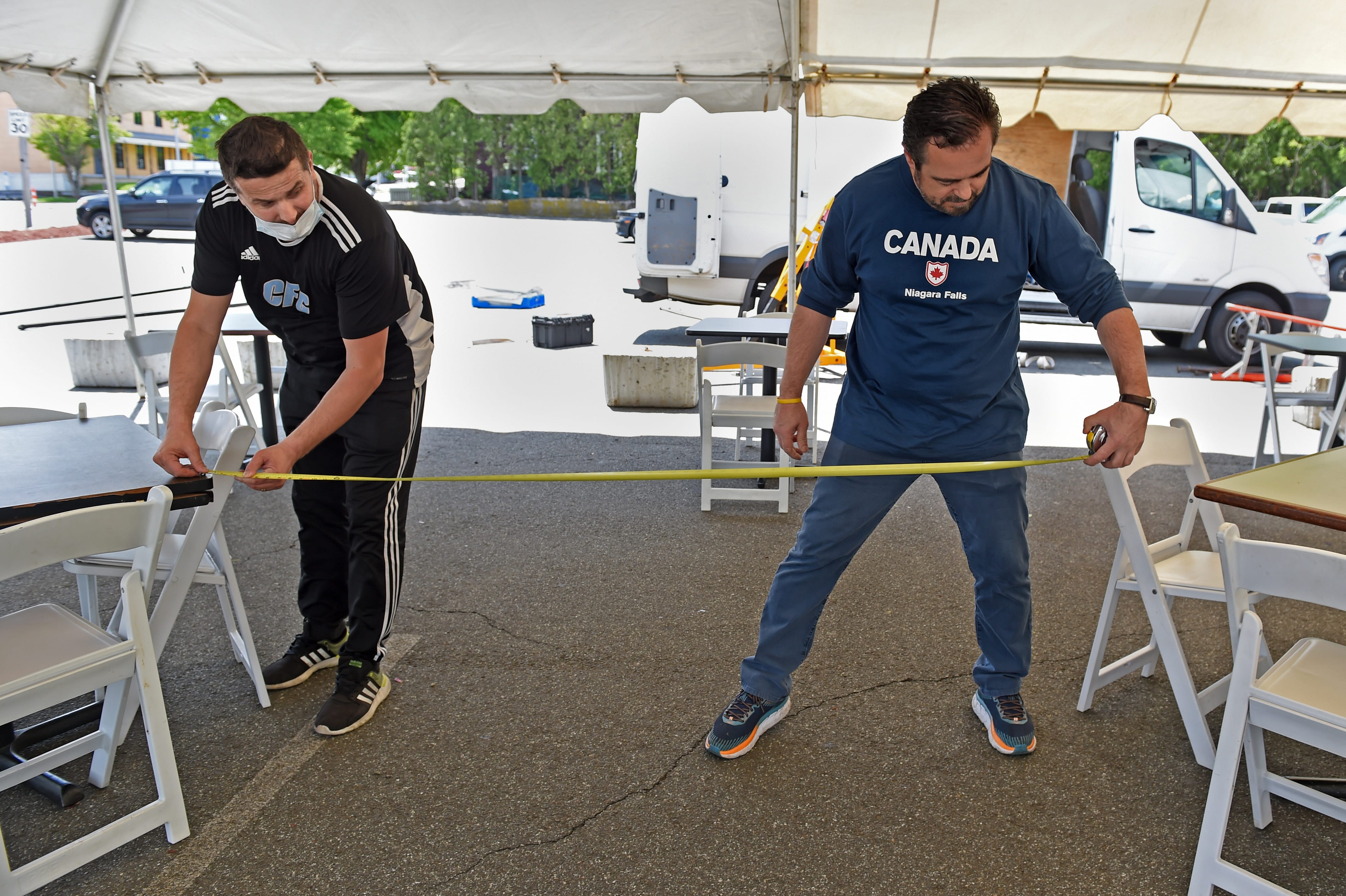 Sammy Bajraktarevic (right), owner of Luce Restaurant in Middletown, and server Alex Cirikovic measure the required six-foot distance between tables as they set up a dining area in the restaurant’s parking lot beneath a 60-by-30-foot tent in preparation to reopen for outdoor dining starting on Wednesday. They trading 12 parking spaces for 15 tables. “It’s like coming back to life again,” said Bajraktarevic.

“How do you plan? I guess we watch the weather. It becomes a lot of gut and a lot of fact,” said Richard Rosenthal, the president of the Max Restaurant Group, owner of 11 restaurants and a catering business, most in Hartford and its suburbs.

How will customers feel about being served by wait staff wearing masks and gloves? And who is ready to dine out?

“There is so much opportunity, and there is so much room for failure and a lot of damage,” said Michael Marchetti, whose family owns restaurants in Old Greenwich, Stamford and Westport.  “I think people will be patient with it. They know this is not their normal dining experience at their favorite restaurant.”

Marchetti said the next few months will be challenging for restaurant owners. They can do more business, but under limited terms. And as stimulus money runs out, they must decide how much they can afford to invest in outdoor spaces.

“We’re putting out money we don’t really have,” he said.

A survey by the Connecticut Restaurant Association found that only 25% of its members would reopen Wednesday for outdoor dining, and Rosenthal said the number would be lower if not for the availability of one of the federal stimulus programs, the Paycheck Protection Program.

“When that expires, it’s going to be especially difficult to make it work with normal payrolls,” Rosenthal said. “Without the PPP money, I doubt we’d be doing it.”

Rosenthal said most of his restaurants will reopen Wednesday for outdoor dining. An exception is Max Downtown in Hartford. It occupies the ground floor of CityPlace, a 38-story skyscraper. The sidewalks outside the building are on an incline, requiring significant construction to provide a level dining area.

Marchetti said he will open for outdoor dining at his Tarantino restaurant in Westport, where the town is closing one block near the Metro-North rail station to accommodate his and three other restaurants. He is in talks with the town over the precise details of when the block will be closed.

How do you plan? I guess we watch the weather. It becomes a lot of gut and a lot of fact.” — Richard Rosenthal, president of Max Restaurant Group

In Stamford, he is awaiting final word from city officials on the outdoor footprint he can occupy outside his downtown eatery, Columbus Park Trattoria. Osteria Applausi, his restaurant in Old Greenwich, will continue to focus on takeout, which has been surprisingly successful, matching or exceeding his pre-COVID business on some nights, he said.

Like Marchetti, Rosenthal said he will take advantage of the willingness of municipal officials to be generous with the public right of way. Both men said officials in communities where they operate have indicated a desire to expedite permitting and planning, as urged by the governor.

West Hartford, where Max Group has three restaurants, is working on plans to close portions of three streets to provide outdoor restaurant space and create a better pedestrian experience for retail customers. Max’s Oyster Bar currently has sidewalk dining, and West Hartford is promising room to expand into a parking lane.

The town’s mayor, Shari Cantor, said municipal officials and the business community are ready to experiment again with its town center, where retail nearly died after the opening of Westfarms in 1974. Outdoor dining was a factor in its comeback.

“We want our retail to thrive. It has been challenging. It was challenging before COVID. We get that,” Cantor said, adding limiting traffic has been successfully implemented elsewhere. “We think that would be a good trial. It’s not permanent, none of it. None of what we do can’t be undone.”