Lamont says it’s time for the COVID weary take a breath. And maybe a hike. 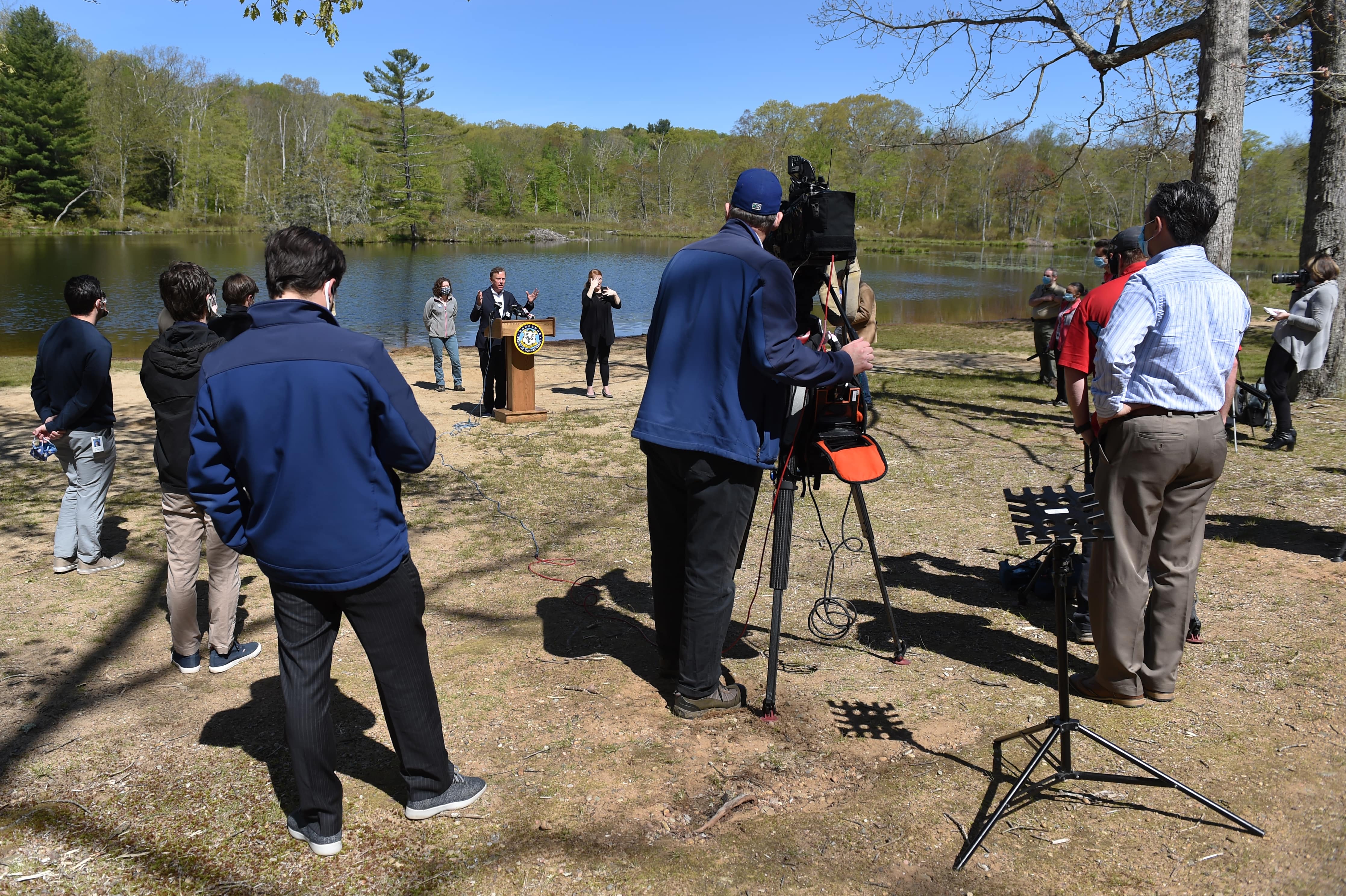 Hebron — The tone and substance of Gov. Ned Lamont’s daily COVID-19 briefing changed Thursday as he looked back on the sweeping restrictions he’s imposed since March and ahead to a Memorial Day weekend when salt-water beaches reopen for swimming.

He met with reporters on the edge of a placid lake in Gay City State Park, a relaxed setting for a governor conducting his 52nd briefing about a novel coronavirus that has come to redefine his tenure as the state copes with an unprecedented health-and-economic crisis.

“Annie and I go on walks all the time,” Lamont said, referring to his wife. “This is one of our favorite places.”

Thursday was the second day in the state’s first phase of easing COVID-19 restrictions: outdoor dining now is permitted at restaurants, and shopping malls and other retailers can open, as long as they limit capacity and require masks.

The governor deemed the limited opening a success: Initial reports indicate that people followed the rules, though the tribal owners of Foxwoods Resort Casino and Mohegan Sun announced plans to reopen on a limited basis on June 1 over the governor’s objections.

In response to a question, Lamont said the state was not without power over the casinos, even though they are located on sovereign tribal land. Connecticut could pull their liquor licenses, he said, but hastened to add he has no such plans.

The latest statistics for hospitalizations and new cases were good, a relative term in a pandemic. There were 53 more deaths attributed to COVID-19, bringing the total to 3,582. But only 191 of the 5,729 tests conducted in the last 24 hours were positive, an infection rate of 3.6%.

Public health experts say an increase in cases is inevitable as Connecticut and every other state begin to reopen, some with no limits. It most likely will be weeks before testing shows if there is a resurgence requiring a delay in Connecticut’s second easing, tentatively on June 20.

As he spoke, someone left two spray-painted signs outside the park comparing the governor and the restrictions he’s imposed on indoor restaurant dining and haircuts to a genocidal dictator responsible for a world war and the extermination of six million Jews.

Free on June 3, urged one the signs. That is the day when restaurants hope the governor allows limited indoor dining.

Polling shows that Lamont and other governors are supported by a majority of voters in their response to the pandemic. Governors have assumed extraordinary powers during the crisis, and Lamont took pains Thursday to cast his steps as reasonable and necessary.

He said he was struck by a New York Times story about Columbia University disease modelers who say that 83% of COVID deaths could have been avoided had the U.S begun enacting social distancing measures on March 1, two weeks before most stay-at-home orders. 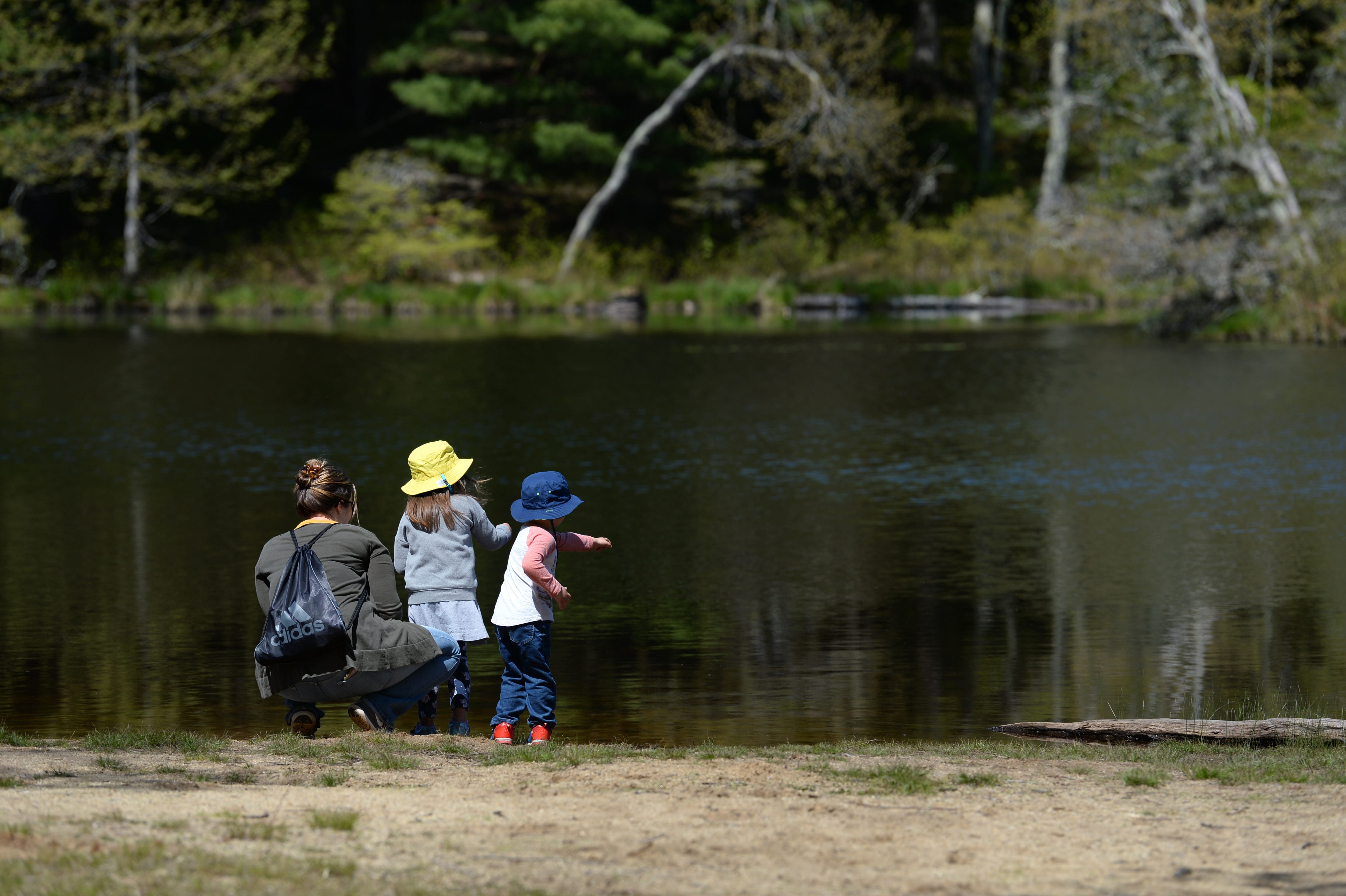 Jen Miller and her children, Aurora, 5, and Colton, 3, look for signs of life in the pond at Gay City State Park in Hebron Thursday. The beach will be closed for swimming this season due to the COVID-19 pandemic. The Millers are from Salem.

“Connecticut closed early. We closed with New York, but we were two weeks behind New York in terms of the pandemic. So I think that did spare us some of the worst ,what could have happened,” he said. “But we were still hit, and we were hit hard.”

Lamont declared a public-health emergency on March 10. That was two days after the first laboratory-confirmed case of a Connecticut resident infected by COVID-19, a Wilton man who had just returned from California.

His first order imposing social distancing came on March 12 and was modest: It barred public gatherings of more than 250. Within a week, nursing homes banned visitors. Schools, restaurant dining, non-food retailers and other businesses were shuttered.

But Lamont broke with New York and other states and never closed state parks, opting instead to limit access once the number of cars in parking lots hit certain measures.

“To me, that was really important,” Lamont said.

Keeping the parks open, while limiting access and requiring social distancing, was good for physical and mental health, he said. Every Connecticut resident lives within a 15-minute drive of a state park, he said.

On Thursday, he was accompanied by Katie Dykes, the commissioner of energy and environmental protection. They outlined the protocols for using the state beaches: Swimming remains banned at beaches in inland parks, mostly likely for the summer.

“They’re just not big enough in our inland parks to allow people to spread out and keep social distances,” Dykes said.

But the beaches at state parks on Long Island will be open to swimming. While six feet is the standard for social distancing, beachgoers will be required to keep 15 feet between their blankets and others.

The danger of transmitting COVID-19 outdoors is low, and wearing a mask generally is unnecessary outside where people can maintain a social distance, Dykes said. But having a mask to put on if encountering a crowd is recommended.

Dykes warned that popular parks are likely to reach capacity and close by late morning or midday. She encouraged people to go out with a back up plan and consider lesser-known parks and trails.

For ideas, directions and information on what is open, check the web site of the Connecticut Forest and Parks Association, which maintains 825 miles of blue-blazed trails in Connecticut, and the beach report maintained by the state Department of Energy and Environmental Protection at https://portal.ct.gov/whatsopenoutdoors.