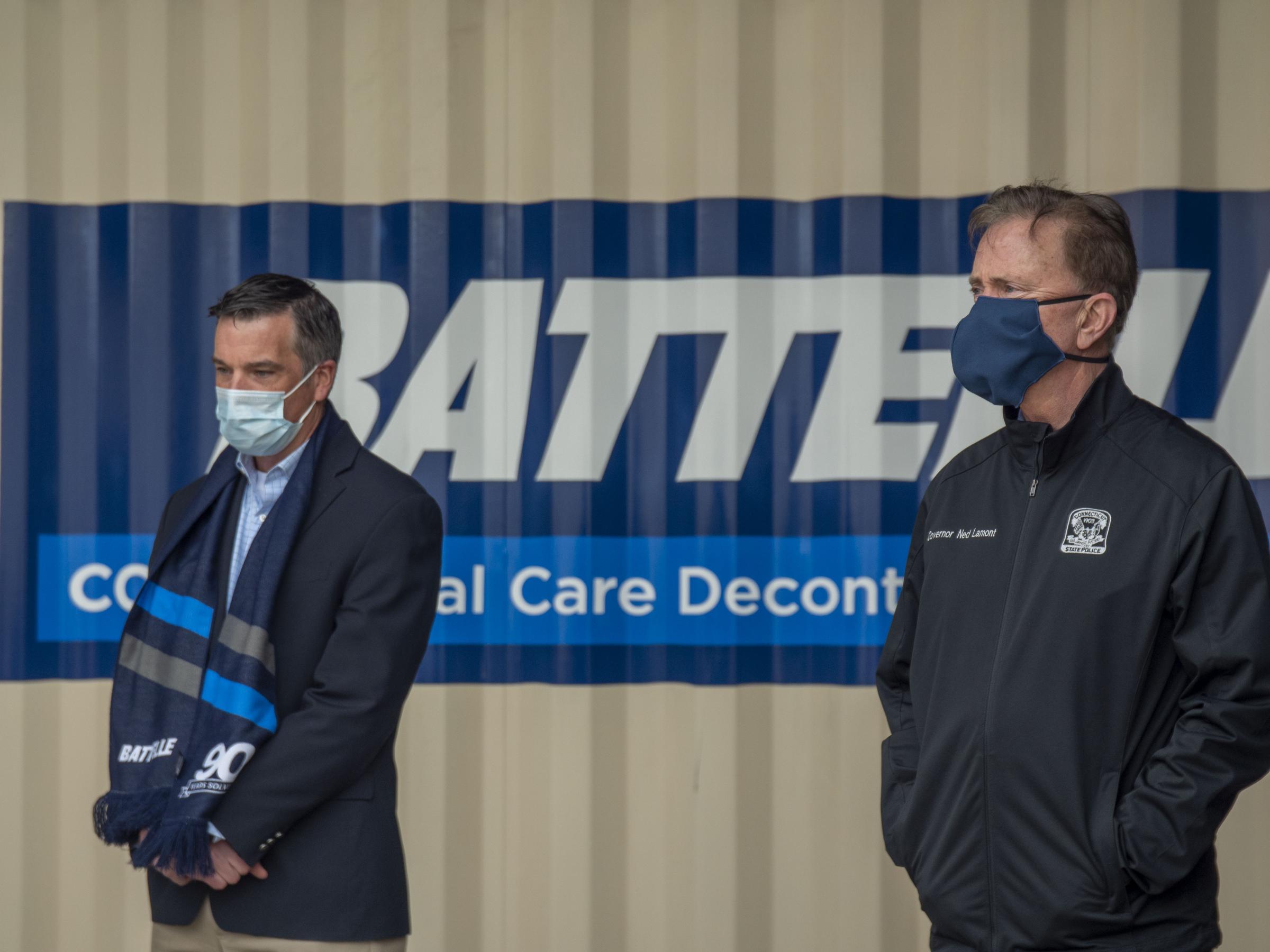 “If You Have To Ask, Wear A Mask,” was a tagline Gov. Ned Lamont promoted Thursday.

Gov. Ned Lamont urged residents Thursday to see the reopening of the economy as a chance to restart. Meanwhile, a new COVID-19 antibody testing program is set to begin in Connecticut to combat the virus, and state officials announced a new job training program, which will launch alongside the next phase of the state’s reopening efforts on June 17.

During his afternoon briefing, Lamont announced a new program designed to help residents looking for work and businesses looking to hire as the state continues its plan to reopen during the COVID-19 pandemic. The CT Back to Work Initiative is a state partnership with the job search engine Indeed, and private workforce training providers Metrix Learning and 180 Skills.

Indeed has agreed to create a portal specifically for Connecticut residents and businesses. The job site will also host a virtual job fair from June 16 – 18 that will include about 40 employers in the state.

Metrix Learning will join the existing SkillUp CT free online learning program the state launched in early May to beef up training with free access to more than 5,000 online courses and certifications focused on information technology, business analysis, project management and other digital literacy. 180 Skills trains users for jobs in the manufacturing industries, according to Garrett Moran, chairman of the Governor’s Workforce Council.

“We know in order to get our economy growing again we need to provide our residents every opportunity to develop new skills for in-demand jobs,” said Glendowlyn Thames, deputy commissioner of the Connecticut Department of Economic and Community Development.

State COVID advice: If you have to ask, wear a mask

Lamont said new COVID-19 cases in the state continue to slow but warned residents to continue to cover their nose and mouth when in public.

“Don’t take these numbers for granted,” Lamont said, while introducing a new video that urges residents who aren’t sure if they should wear a mask to err on the side of caution. The video uses the tagline “If you have to ask, wear a mask.”

State officials reported a drop of 24 patients currently hospitalized with COVID-19 compared to Wednesday, which brings the current total to 246. Twenty-six more people died from complications related to coronavirus. There have been 4,146 deaths associated with the virus in Connecticut. There have been 44,461 cases of COVID-19 in the state, with 114 new cases reported Thursday.

Lab-designed COVID-19 antibodies to be tested at Hartford HealthCare

A federally funded clinical trial is about to begin at Hartford HealthCare, hospital officials announced Thursday. The study will examine whether two laboratory-designed antibodies are effective at preventing and treating infections from the novel coronavirus.

Unlike vaccines, which are preventive, antibody injections can provide virus protection, but also can be used to treat sick patients.

Rocco Orlando, chief of academic affairs at Hartford HealthCare, said lab-designed antibodies have been used for years to treat conditions like Lupus and cancer.

“This is an antibody designed in a laboratory that is targeted at what’s called the spike protein on the COVID virus,” Orlando said during the health care network’s Thursday morning briefing.

The drug, developed by Regeneron Pharmaceuticals, uses two antibodies identified from thousands reviewed by scientists in a lab, the company said in an announcement Thursday.

Orlando said Hartford HealthCare’s trial will focus on hospitalized COVID-19 patients and those well enough to be sent home.

Still, it’s a phase one national trial, which means the study is at an early stage and time will tell if the antibodies are effective or safe enough for widespread use.

The drug maker would also need to obtain an emergency use authorization from the U.S. Food and Drug Administration.

“If all goes well, we hope to have substantial data that allows us to better characterize safety and efficacy of this medicine in the Fall,” said Alexandra Bowie, a spokesperson for Regeneron, in an email Thursday.

Bowie said Hartford HealthCare was currently the only trial site in Connecticut, but that “there could be more in the future.”

Meanwhile, her Republican Senate colleagues addressed their agenda for police reform in the wake of the death of George Floyd, who died in Minneapolis after a police officer pressed a knee into his neck for more than eight minutes.

Klarides wrote to her state legislative colleagues calling for the House and Senate to come back together before fall. Klarides joined Deputy Minority Leader Vincent Candelora (R-North Branford) on May 27 to announce they were starting a petition to reconvene for a special session to discuss state budget shortfalls related to COVID-19.

“We are concerned that the (Lamont) administration will spend more money allocated through the $1.4 billion in Coronavirus Relief Fund,” Klarides wrote in the letter.

Klarides said that difficult, bipartisan discussions will be needed for the state to pass police reform laws.

The state Senate Republican Caucus also issued a statement Thursday saying police reform was a priority and discussions will continue into the next legislative session in 2021. “Only during a full legislative session will the public be able to have their voices heard,” the statement said. “If we want to get this right, we need more than just legislators making decisions. We need to hear from the public and understand all perspectives.”

Labor union representatives gathered at rallies on the State Capitol steps and outside the rest area on I-95 North in Darien Thursday to speak in support of essential workers.

Bianca Johnson, a security officer who works for SecurAmerica who said she was stationed at The Hartford, told the crowd at the Capitol she can not afford the health insurance offered through her employer and struggles to pay the rent for the apartment she shares with her young child.

James Smith, a security officer at Aetna, echoed Johnson’s concerns. “Essential is not sacrificial,” Smith told supporters at the Capitol.

Service plaza fast food workers joined State Rep. David Michel, D-Stamford, at a second 32BJ event outside the rest stop in Darien to ask for improved sanitation during the pandemic and better pay and benefits for restaurant workers.