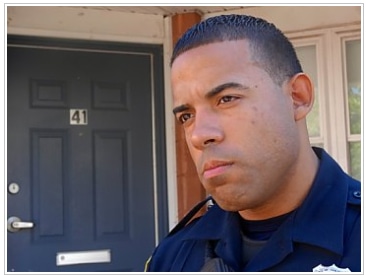 During a Christmas morning roadside dispute in Fair Haven, Officer Jason Santiago kicked an intoxicated man in the groin as the latter lay handcuffed on the ground.

He then pulled the 35-year-old up by his braids — and punched him in the face with a closed fist, after the man spit in the officer’s face.

The Independent obtained a 19-page summary of the investigation and its conclusions Thursday night after filing a Connecticut Freedom of Information Act request.

Police Chief Otoniel Reyes has referred charges against Santiago to the Board of Police Commissioners. He said he is recommending that the commissioners fire Santiago after hearing the case on June 16.

Reyes said that Santiago is also currently under investigation by the state’s attorney’s office, which is considering filing criminal charges against the officer.

“I support the actions of the state’s attorney no matter what they are,” Reyes said. “I understand that this officer’s actions violated not only department policy, but they may have also violated criminal law.”

“What’s important for the community to know here is that we as a department will not tolerate police brutality in any form. We will not condone this behavior.” 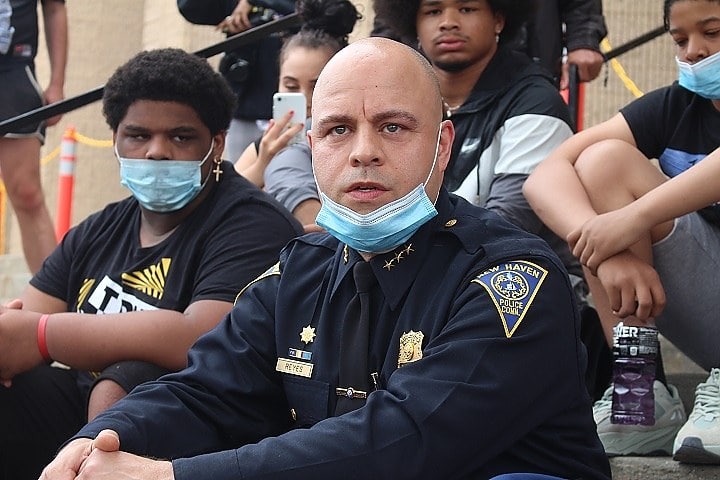 The incident itself took place on Dec. 25, 2019. According to the investigative report, It involved an intoxicated man who who got into an argument with police as they tried to get him to move out of the way so that a tow truck could tow away his busted van.

What started out as a verbal dispute soon turned physical, as four officers wrestled the man into handcuffs—and then a fed-up Santiago kicked the man in the groin, pulled him by the hair, and punched him in the face after the man apparently spit in Santiago’s mouth and eyes.

As detailed in the IA report, the department didn’t learn about Santiago’s actions until March.

That’s when the Litchfield state’s attorney—who was prosecuting the man arrested that Christmas morning for allegedly assaulting an officer and breach of peace—noted discrepancies between the incident report filed by arresting Officer Michael Hinton and the body camera footage recorded by Hinton and Santiago.

“I have serious concerns about the use of force used against [the arrestee] by arresting officers,” Assistant States Attorney Jennifer Lindade emailed New Haven Lt. and IA chief David Zannelli on March 9.

On March 10, the chief ordered IA to begin its investigation.

These three months later, as the city and the country are convulsed by mass protests sparked by a murderous act of police brutality in Minneapolis, Reyes said, “This couldn’t come at a worse time. At a time when our community is in pain, and our community is really questioning our values, and questioning the values of the police.”

“This is not what the men and women of this department represent,” he stressed. “This is not the value system our department is about. This goes against everything we stand for.”

If upheld, Reyes’ recommendation would end on an ominous note a career that has also had its highlights. Just this past Sunday, Santiago rushed into a burning car to save the life of an armed man who had driven away from police. In January Reyes and other supervisors praised Santiago for defusing a dangerous encounter with a knife-wielding man that could have otherwise ended with shots fired.

The chief said his decision to recommend that Santiago be fired — as well as his 15-day suspension of Hinton for turning on and off his body camera throughout the Dec. 25 incident — represent the kind of accountability he believes the department must hold itself to in order to preserve its credibility with the community at a time of mass protest over police conduct.

“This is a reminder that none of us are above the law,” Reyes said.

Read the original, longer version of this story in the New Haven Independent.