New Haven — In the heart of Wooster Square, New Haven’s historically Italian American neighborhood, the statue of Christopher Columbus has come down after more than 125 years—to the cheers of a crowd of mostly younger New Haven residents, and the laments of some older Italian Americans.

Last week, New Haven Mayor Justin Elicker announced in a statement that he’d support the removal of the Columbus statue. This decision came after several petitions calling for the statue’s removal garnered significant support, including from a number of local Italian American groups and community leaders.  In a June 15th statement, Elicker said that while the statue was symbolic for many Italians, it “also represents a time of colonialism and atrocities committed.”

Many who showed up were older residents who had grown up in the neighborhood, and said they felt this was an attack on their Italian American identity. 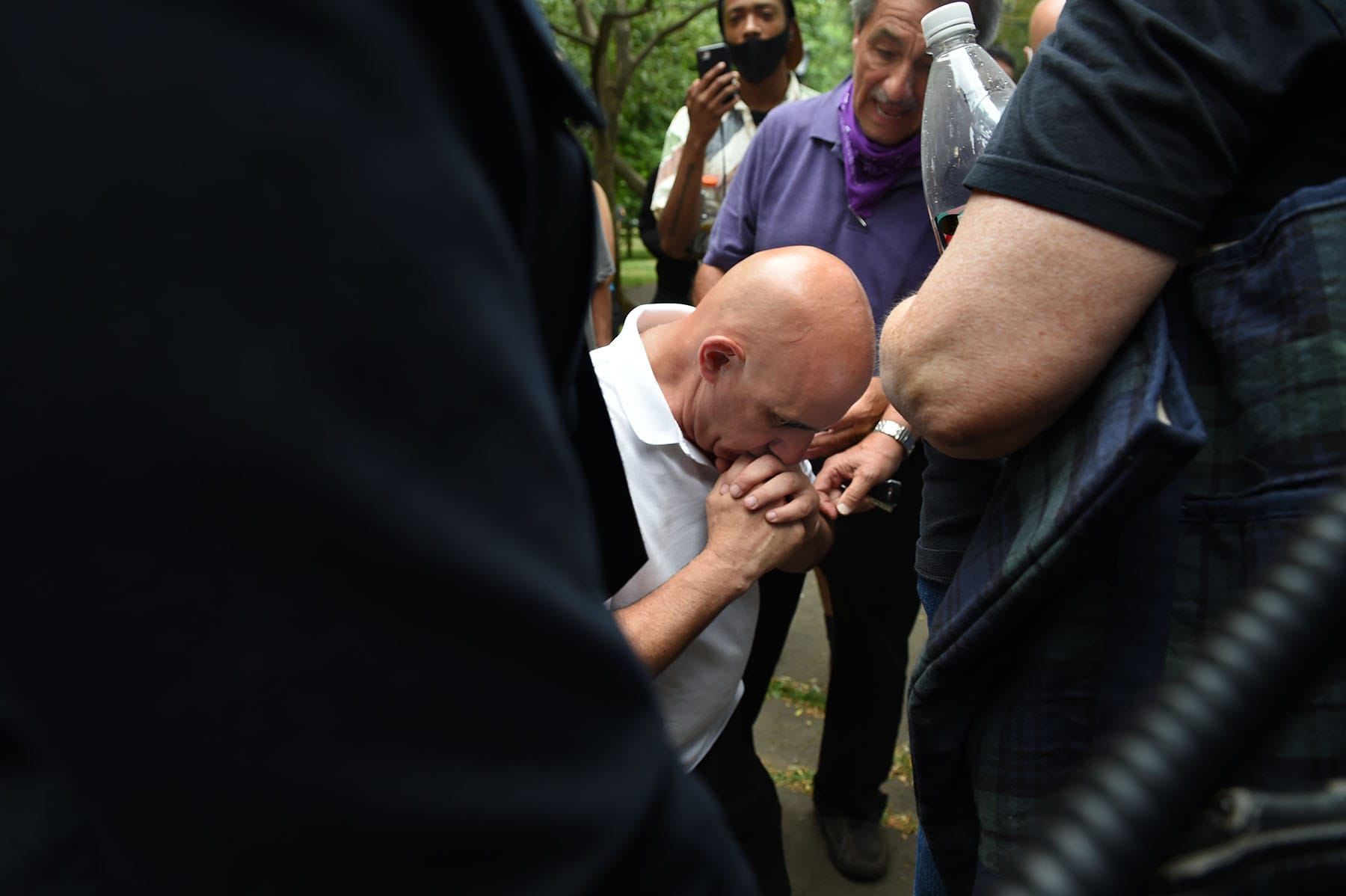 A man who opposed the removal of the Columbus statue knelt to pray briefly surrounded by New Haven police before walking away. The city removed the statue in recognition of its representation of colonialism that many find offensive in light of heightened tension over racial injustices.

As the morning wore on, two new protesters arrived in the park, this time in support of the statue’s removal.

The scene grew tense as white pro-Columbus protesters confronted the counter-protesters, who were young people of color. Members of the pro-Columbus group confronted the new protesters with belligerent language, and a number of individuals from both groups exchanged profanities.  A short scuffle ensued, though the incident was ultimately diffused as New Haven Police Department officers rushed over.

After a video of the incident circulated on social media, the much larger crowd of protesters converged on the park, most of them supportive of the statue’s removal. Meanwhile, a crane and cherry picker arrived at the site and city workers began to prepare the statue for removal, while protesters chanted “Tear it down!” and occasionally, “Off with his head!” 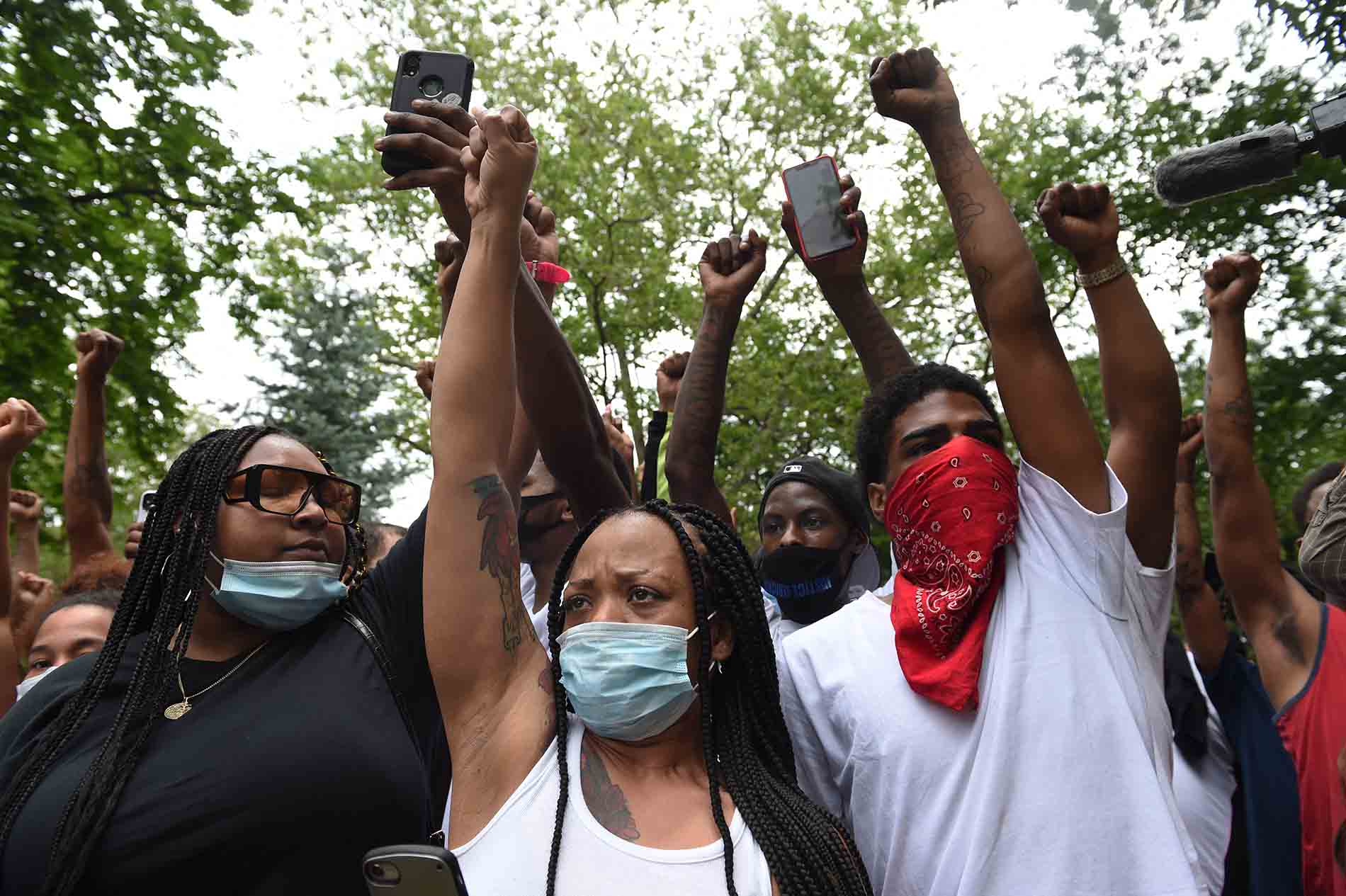 Protestors hold their fists in the air chanting “Tear it down!” as a statue of Christopher Columbus is prepared for removal in Wooster Square Park in New Haven, June 24, 2020.

Nicolas Phillips has lived in Wooster Square for five years, and came out to voice his support of taking down the statue. Phillips is Puerto Rican, and says that he feels like the Indigenous culture that’s part of his heritage was stolen from him by European colonists.

“Every day I walk my dog under the shadow of that statue,” he said. “As someone of Indigenous descent, I think about what that statue means to me, and I’ve always despised that thing. And I couldn’t be happier to be here today watching it come down. And I do hope they replace it with a more worthy Italian representative. I know that’s important to this neighborhood. But I’m glad to see Columbus is going to be gone.”

A worker on the cherry picker wrapped straps around the statue and attached them securely to the hook of the crane overhead, a process that took several hours. Some pro-removal protesters grew impatient with the progress, though a woman told the crowd over the bullhorn “we ain’t going nowhere” until the statue came down.

Finally, around 1pm, the crane began to raise the statue off its plinth. The crowd cheered, the crane slowly carried the hanging statue over the grass to where workers helped lower the statue onto the back of a New Haven Public Works truck.

Native activist and New Haven political organizer Norm Clement spoke to a now-festive crowd, reminding them that removing the statue of Christopher Columbus was ultimately about recognizing the atrocities committed against Native peoples during European colonization of the Americas.

“I want to take a minute to pray for the Quinnipiac People, who were murdered on this land right here,” Clement said. 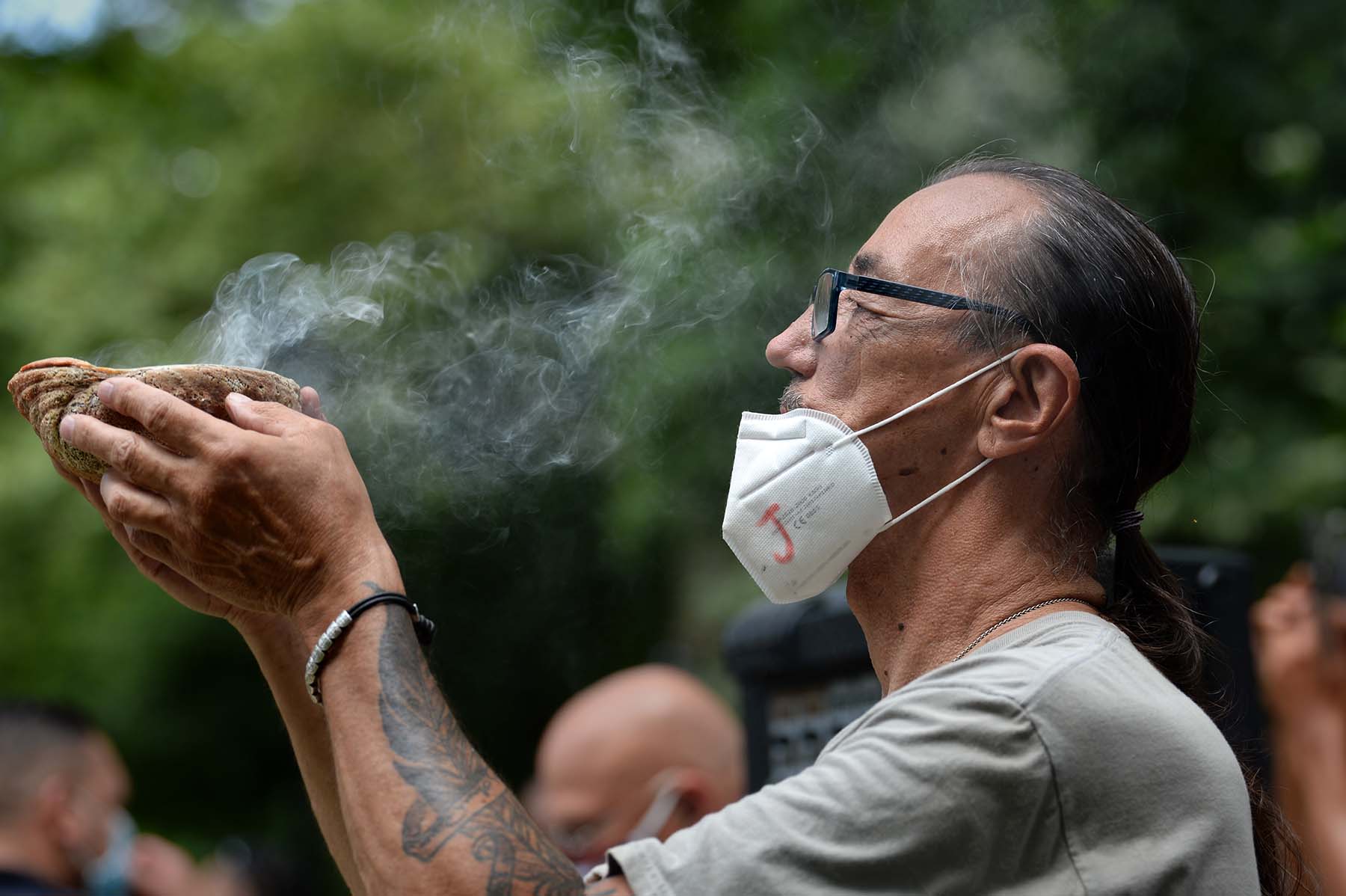 Norman Momowetu Clement, of New Haven, burns sage as the statue of Columbus is removed. Burning sage, also known as smudging, is used by Native Americans to cleanse a person or space, and to promote healing and wisdom.

As the statue was loaded onto the public works truck, the crowd began to disperse.

Mayor Justin Elicker spoke about the statue’s removal at a press conference later in the afternoon.

“Leadership in Italian community spearheaded this effort,” he said. ”There were no arrests even though there were intense feelings.  But overall when we step back I think we can be proud that we did this in a way that was a collaborative and successful moment.”

According to a press release from the Mayor’s office, the statue will remain in the city’s custody. The city has not decided where the statue will ultimately be housed, though according to a city spokesperson, the Italian American Heritage Group of New Haven has suggested it be placed in the Knights of Columbus Museum.